Mercedes is a city in the province of Buenos Aires, Argentina. It is located 100 km west from Buenos Aires and 30 km south west of Luján. It is the head town of the district (partido) of Mercedes as well as of the judicial district. It is also the seat of the Roman Catholic Bishop of Mercedes and Luján. 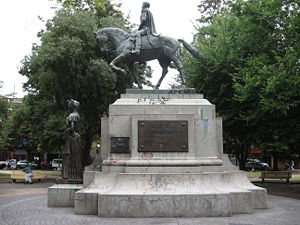 Mercedes was first established as a fortress against native attacks. Its original name was "La Guardia de Luján" and it was one of several fortress built in the borders of Buenos Aires to protect this city and gather the people living in the county near.

It became a town on 25 June 1752 when founded by José de Zarate during a military campaign known as "La Valerosa". In 1777 viceroy Pedro de Ceballos proposed moving the town, but actually it was moved to its present location by viceroy Juan José de Vértiz on 8 May 1779. When moved its name was changed to "Nuestra Señora de las Mercedes".

Mercedes is one of the few towns in Argentina in which three different railways meet, thus been connected with large commercial areas as Buenos Aires as well as the Pacific Ocean, the Andes range and the pampas plains. This was a powerful reason during the 19th century for proposing the city as the capital of Buenos Aires Province. Finally La Plata became capital, but Mercedes became known as the "West Pearl".

The large gothic cathedral Basílica Catedral Nuestra Señora de Mercedes can be found on San Martín square, also the location of the italianate Palacio Municipal (city hall) and numerous cafés and restaurants. A library founded by President Domingo Faustino Sarmiento is located a few streets away. 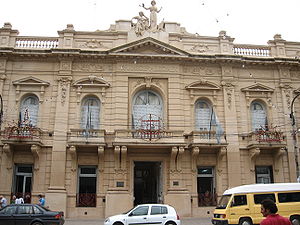 On the outskirts of Mercedes there is an old pulpería or rural bar and store, institutions which enjoy mythical status in gaucho culture. Known as "lo de Cacho" (Cacho's), it claims to be the last pulpería of the Pampas and retains the atmosphere of 1850, the year it opened. There is an original wanted poster for the outlaw Juan Moreira and reminders of gauchos, their culture and knife fights.

There is an old war memorial called "La Cruz de Palo". It is a wooden cross remembering where the last of the native attacks to Mercedes took place on 27 October 1823.

Mercedes has been the birth place of several football players, musicians, writers and journalists. Nevertheless, it is most known as the town where ephemeral president Héctor José Cámpora was born as well as dictator Jorge Rafael Videla.

The city was organized by a-hundred-meters-long square blocks (as a roman castra). The streets are numbered with even numbers from South to North and with odd numbers from East to West. Thus, is really easy to orientate, find addresses and calculate distances along the city.