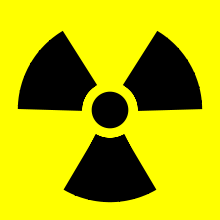 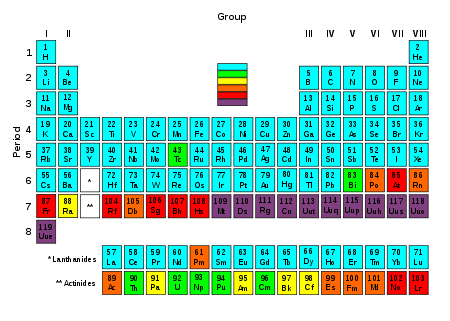 Radioactive contamination, also called radiological contamination, is radioactive substances on surfaces, or within solids, liquids or gases (including the human body), where their presence is unintended or undesirable, or the process giving rise to their presence in such places.[1] Also used less formally to refer to a quantity, namely the activity on a surface (or on a unit area of a surface).

As with other contamination, radioactive contamination refers only to the presence of the unintended or undesired radioactivity, and gives no indication of the magnitude of hazard involved.

Contamination may occur from radioactive gases, liquids or particles. For example, if a radionuclide used in nuclear medicine is spilled (accidentally or, as in the case of the Goiânia incident, through ignorance), the material could be spread by people as they walk around. Radioactive contamination may also be an inevitable result of certain processes, such as the release of radioactive xenon in nuclear fuel reprocessing. In cases that radioactive material cannot be contained, it may be diluted to safe concentrations. For a discussion of environmental contamination by alpha emitters please see actinides in the environment.

Radiation monitoring involves the measurement of radiation dose or radionuclide contamination for reasons related to the assessment or control of exposure to radiation or radioactive substances, and the interpretation of the results. The methodological and technical details of the design and operation of environmental radiation monitoring programmes and systems for different radionuclides, environmental media and types of facility are given in IAEA Safety Standards Series No. RS–G-1.8 [2] and in IAEA Safety Reports Series No. 64.[3]

Radioactive contamination may exist on surfaces or in volumes of material or air. In a nuclear power plant, detection and measurement of radioactivity and contamination is often the job of a Certified Health Physicist.

Surface contamination is usually expressed in units of radioactivity per unit of area. For SI, this is becquerels per square meter (or Bq/m²). Other units such as picoCuries per 100 cm² or disintegrations per minute per square centimeter (1 dpm/cm² = 167 Bq/m²) may be used. Surface contamination may either be fixed or removable. In the case of fixed contamination, the radioactive material cannot by definition be spread, but it is still measurable.

In the natural world, there is always radiation being emitted from radionuclides as they decay. Not only is the entire world constantly bombarded by cosmic rays, but practically every living thing on earth contains carbon-14 and tritium and most (including humans) contain some potassium-40. These tiny levels of radioactivity pose little danger because the natural radioisotopes are diluted amongst stable isotopes. All of these sources of ionizing radiation form the natural background radiation. When, however, radioactive isotopes are concentrated in a particular place outside of a planned containment, we call that concentrated area contaminated. If radioactive contamination is acute (highly concentrated enough to pose a risk of radiation exposure), then we call that location a "hot spot."

Many instances of contamination arise from particles that have become airborne. Prior to the deposition of radionuclides on a surface, the air is contaminated, which poses an inhalation hazard.

In the case of low-level contamination by isotopes with a short half-life, the best course of action may be to simply allow the material to naturally decay. Longer-lived isotopes should be cleaned up and properly disposed of, because even a very low level of radiation can be life-threatening when in long exposure to it.

Facilities and physical locations that are deemed to be contaminated may be cordoned off by a health physicist and labeled "Contaminated area." Persons coming near such an area would typically require anti-contamination clothing or anti-c's.

High levels of contamination may pose major risks to people and the environment. People can be exposed to potentially lethal radiation levels, both externally and internally, from the spread of contamination following an accident (or a deliberate initiation) involving large quantities of radioactive material. The biological effects of external exposure to radioactive contamination are generally the same as those from an external radiation source not involving radioactive materials, such as x-ray machines, and are dependent on the absorbed dose.

The biological effects of internally deposited radionuclides depend greatly on the activity, the biodistribution, and the removal rates of the radionuclide, which in turn depends on its chemical form, the particle size, and route of entry. Effects may also depend on the chemical toxicity of the deposited material, independent of its radioactivity. Some radionuclides may be generally distributed throughout the body and rapidly removed, as is the case with tritiated water.

Some organs concentrate certain elements and hence radionuclide variants of those elements. This action may lead to much lower removal rates. For instance, the thyroid gland takes up a large percentage of any iodine that enters the body. Large quantities of inhaled or ingested radioactive iodine may impair or destroy the thyroid, while other tissues are affected to a lesser extent. Radioactive iodine-131 is a common fission product; it was a major component of the radiation released from the Chernobyl disaster, leading to nine fatal cases of pediatric thyroid cancer and hypothyroidism. On the other hand, radioactive iodine is used in the diagnosis and treatment of many diseases of the thyroid precisely because of the thyroid's selective uptake of iodine.