Namakkal
This article is about the municipality in Tamil Nadu, India. For its namesake district, see Namakkal district.

Namakkal (Tamil: நாமக்கல்) is a city and a municipality in Namakkal district in the Indian state of Tamil Nadu. It is the headquarters of Namakkal district. It is the first ISO 14001-2004 certified municipality in Asia for environmental management,[1] specifically the provision and maintenance of water supply, solid waste and sewage management, town planning, lighting and other social services.[2] It is named as Educational city, Poultry city, and Transport city.

It is a part of Kongu Nadu (Kongu Desam) region of Tamil Nadu which was hotly contested and coveted by both the ancient Pallavas and the Pandyas.Namakkal was in the hands of Atiakula King called Gunasila who has marriage with Pallava King. Later the taluk was over run by the Cholas in the Kongu Mandalam .After the struggle between the Cheras , Cholas and Pandiyas, the Hoysalas rose to power and had control till the 14th century followed by Vijayanagar Kings till 1565 AD. Then the Madurai Nayakas came to power in 1623 AD. Two of the Polygons of Thirumalai Nayak namely, Ramachandra Nayaka and Gatti Mudaliars ruled the Salem area. The Namakkal Fort is reported to have been built by Ramachandra Nayakas. After about 1625 AD, the area came successively under the rule of Muslim Sultans of Bijapur and Golkonda Mysore kings and then the Marathas, when about the year 1750 AD. Hyder Ali came to power. During this period, it was a history of power struggle between Hyder Ali and later Tippu , with the British. The Rock Fort in Namakkal is a special feature of the Town. The Fort covers an area of one and half acres of flat surface and is accessible from South-West by a flight of narrow steps. Namakkal was held by Killdhar (Caption) on Hyder Ali until it was captured by British in 1768. For a brief period during late 18th and early 19th century Namakkal was under Tiruchirappalli district of British Rule. Later Namakkal was transferred back to Salem District.

The Namakkal City is located with the surrounding Cities as mentioned below (distance in km approximately):

The landscape of Namakkal is such that it would not be affected by floods.

Namakkal is a historic town with reference back to at least 7th century. The name Namakkal derives from Namagiri, which is the name of the single rock formation at the center of the town.Two cave temples at Namakkal were called as Adiyendra Visnugrha (Ranganatha swamy Temple) and Adiyanavaya Visnugrha (Narasimha swamy Temple).These Rock cut shrines were built by King Gunaseela of Adhiyaman clan descendant.Because of his marriage relations with Pallavas the temples were built of Pallava Architectural style during 7th century. Generally, Namakkal is considered to be a Vaishnava Kshetram, and there is no Shiva temple in the town until a few years ago. The rock is enormous - 65 meters high and more than a kilometre in circumference. Over this massive rock, is a fort. The fort over the rock were built by Ramachandra Nayakar, a small king who ruled Namakkal during 16th century. It is believed that Tippu Sultan hide himself in this fort for some time to escape the British. The fort was not built by Tippu Sultan but he occupied it for a brief period of time.Later the fort was captured by British. The front side of the hill is called Thiru. Vi. Ka. Paarai and used by taxis as their stand.Gandhiji held a public meeting in 1933 in Namakkal under the slope of the Namakkal rock. It is one of the few places in Tamil Nadu, that has not been seriously affected by famine and war.

Mohanur is one of the small towns, near Namakkal, where the Kaveri River is running towards Tiruchirappalli. At Mohanur, on the bank of Kaveri river, one old and famous Sivan temple- Asala Deepeswarar with Madhukaraveni and also a Navaladiyan Temple. 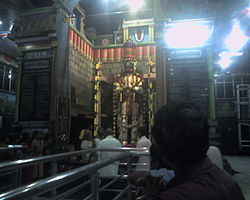 Namakkal Anjaneyar temple has more than 1500 Years history . The fort of Namakkal is guarded by a giant Anjaneya. The idol is so famous that it has been known as Namakkal Hanuman.Anjaneya is in Digambara temple (with sky as the roof) facing and worshipping Lord Lakshmi Nrusimha and the Saleegramam. The Anjaneya in this kshethra is eighteen feet tall and is having dharshan of the Lord Lakshmi Nrusimha about 250 feet (76 m) away. The eye of Anjaneya is in straight line with the patha [lotus feet] of Lord Lakshmi Nrusimha. One can witness Anjaneya having the dharshan of Lord's Lotus feet from the Garudalwar sannathi even today. The imprint of the footsteps of Anjaneya Swami is seen in the Kamalalam tank steps.There was also a rumour in namakkal that the anjaneyar grows in height each and every year.They did some poojas and made Anjaneya to be calm because there should not be any disaster in the world.As time passes many would have been forgotton about this rumours.

The principal deity worhsipped here is a beautiful carved murti of Lord Vishnu in the form of Sri Narasimha Swami. The beautiful murti and the ancient cave temple are carved out of an imposing hill.There is a separate shrine for Goddess Namagiri Lakshmi.

India’s Geological Survey has found platinum prospects in Namakkal district. Describing them as good discoveries, the government said the GSI is at the scientific stage where there is an evidence of substantial deposits of platinum which needs to be explored further to understand the exact location and quantities.

The GSI was engaged in the exploratory work for the last three years. As of now, exploration was carried out up to 30 metres. If explored further, scientists of the GSI were of the view that the potential will be even greater, both in quantity and quality.

A memorandum of understanding was signed to facilitate further exploration of mineral development of the state.

The Geological Survey of India and Tamil Nadu Minerals Ltd (Tamin) will jointly explore the commercial viability of mining platinum group of minerals present in the Mettupalayalam and Namakkal areas of the state.

As per the agreement, GSI will also carry out surveys to find the presence of platinum in other parts of the state.

The Kolli Hills are featured in several works of classical Tamil literature such as Silappathigaram, Manimekalai, Purananuru and Ainkurnuru. The region was ruled by Valvil Ori around 200 AD, who is praised as one of the seven great philanthropists of ancient Tamil Nadu. His valor and marksmanship are sung by several poets, and his exploits are a popular part of folklore. Ori is said to have killed a lion, bear, deer and a boar with a single arrow. The jackfruit grown on these mountains is known for its taste and fragrance and is often soaked in wild honey that is also harvested from these mountains. The mountains are covered by lush green vegetation in the spring and monsoon, and are streaked with streams which add to the natural beauty. There are three reserved forests that are controlled by the Government of Tamil Nadu, namely Ariyur Solai, Kundur Nadu, Pulianjolai It is not correct to regard the name kolli hills as being due to the incidence of deadly diseases such as malaria!It is because early literature records the existence of an image called kollippavai on top of these hills.This image was believed to represent the spirit of a maiden who lured wayfarers by her beauty and then killed them. The mountain is a site of pilgrimage, because of the Arapaleeswarar temple, which is believed to have a secret path to the Shiva temple in Rasipuram. This Shiva temple is said to have been built by Valvil Ori in the 1st or 2nd century when he ruled this area. "Arappaleeswara sathakam" is the poem which praises the Lord Arappaleeswarar. It is believed that this temple exists during the Sangam period itself.

Some of the famous spots are:

What to do in Kolli Hills:

some of the famous temples:

Buses Ply to Various important Cities in Tamilnadu like Coimbatore, Trichy, Madurai One new broadgauge Railway Line is under construction, which will connect, Salem with Karur via Mohanur, Namakkal and Rasipuram.

It is expected that this new line will boost up the prosperity of Namakkal and Karur districts.

For Air connection there is a flight from Salem to Chennai 5 days a week. For Good Connectivity people from Namakkal use Trichy, Chennai and Coimbatore Airports.

The temperature ranges from 18 to 42 degrees Celsius throughout the year.

Economy and Industries in Namakkal

V. Ramalingam Pillai, more popularly known as Namakkal Kavignar (நாமக்கல் கவிஞர்), is a Tamil poet who hailed from Namakkal (born in 1888 in Mohanur). His poems on the non-violent Indian independence movement are popular. His famous patriotic poem is

Pottery and sculpture are promoted by way of traditional festivals and temple celebrations. Most villages in the district, like many other south Indian villages, have a temple to a guardian deity at the perimeter of the village. Aiyanar is the guardian deity of the village. Much artistic expression goes into sculpting the Aiyanar statues.

Namakkal assembly constituency is part of Namakkal (Lok Sabha constituency). Mr.S.Gandhiselvan has been elected as M.P. from the newly formed constituency and is union Minister of state for Health & Family Welfare.[14]

Salem Educational Directory is a website gives you an overview of the Salem Periyar University’s campuses, Affiliated Colleges, Courses Offered, PRIDE Distance Education and articulates many of the reasons why Periyar University is justly renowned nationally and internationally.[15]

Namakkal is a major lorry and truck hub right from 1950s. Many conglomerates of trailers, tanker lorries are found in Namakkal.

Namakkal district has emerged as one of the transportation hubs of the TN State. About 40 per cent of the trucks operated in the State are from Namakkal and the district, noted for truck body building, has over 18,000 trucks, including 3,000 tankers and 2,500 trailers, with an annual addition of approximately 500 trucks.

Namakkal, the major poultry producer of southern India, has been witnessing a positive change in the recent years. The district alone accounts for about 75 per cent of the birds produced in the Namakkal zone of the National Egg Coordination Committee. The poultry sector in the zone has grown by 19.53 per cent in the past two years[when?]. The total number of birds has gone up from 307.34 lakh in 2005-06 to 367.35 lakh in 2007-08. The zone produces about 2.5 crore eggs a day, with Namakkal contributing 1.75 crore of the total production. The labour-intensive sector provides direct employment to over one lakh people.