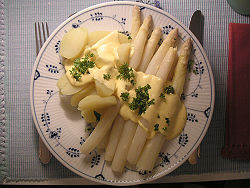 /hɒlənˈdeɪz/ or /ˈhɒləndeɪz/; French: [ʔɔ.lɑ̃.dɛz]) is an emulsion of egg yolk and butter, usually seasoned with lemon juice. In appearance it is light yellow and opaque, smooth and creamy. The flavor is rich and buttery, with a mild tang added by the lemon juice, yet not so strong as to overpower mildly-flavored foods.

Hollandaise is one[1] of the five sauces in the French haute cuisine mother sauce repertoire. It is considered notoriously difficult to make, because yolks tend to scramble when heated. It is so named because it was believed to have mimicked a Dutch sauce for the state visit to France of the King of the Netherlands. Hollandaise sauce is well known as a key ingredient of eggs Benedict, and is often paired with vegetables such as steamed asparagus.

There is debate as to who originally developed Hollandaise sauce. Many historians believe that it was actually invented in the Netherlands and then taken back to France by the Huguenots. A recipe for Hollandaise sauce appears in a Dutch cookbook by Carel Baten, which dates from 1593. In 1651, François Pierre La Varenne describes a sauce similar to Hollandaise sauce in his groundbreaking cookbook Le Cuisinier François: "avec du bon beurre frais, un peu de vinaigre, sel et muscade, et un jaune d’œuf pour lier la sauce" ("with good fresh butter, a little vinegar, salt, and nutmeg, and an egg yolk to bind the sauce"). Alan Davidson notes a "sauce à la hollandoise" from François Marin's Les Dons de Comus (1758), but since that sauce included flour, bouillon, herbs, and omitted egg yolks, it may not be related to the modern Hollandaise.[2] However, Larousse Gastronomique states that, in former times fish 'à la hollandaise' was served with melted butter (implying that at one time egg yolks were not a part of the designation, Hollandaise).[3] Davidson also quotes from Harold McGee (1990), who explains that eggs are not needed at all and proper emulsification can simply be created with butter. He also states that if one does wish to use eggs they are not needed in so great a quantity as normally called for in traditional recipes.

The sauce using egg yolks and butter appeared in the nineteenth century. Although various sources say it was first known as "sauce Isigny" (a town in Normandy said to have been renowned for the quality of its butter), Isabella Beeton's Household Management had recipes in the first edition (1861) for "Dutch sauce, for fish" (p. 405) and its variant on the following page, "Green sauce, or Hollandaise verte". Her directions for hollandaise seem somewhat fearless:

"Put all the ingredients, except the lemon-juice, into a stew-pan; set it over the fire, and keep continually stirring. When it is sufficiently thick, take it off, as it should not boil..."

Hollandaise is considered to require some skill and knowledge to prepare and hold. Properly made, it will be smooth and creamy with no hint of separation. The flavor will be rich and buttery, with a mild tang from the lemon juice. It is best prepared and served warm, but not hot.

There are multiple methods for preparing a Hollandaise sauce. All methods require near-constant agitation, usually executed with a wire whisk. First the yolk and lemon juice (or water) should be whisked off heat until light and frothy, then while whisking vigorously over warm water, becoming pale yellow and expanding two or three times in volume. Then removed from heat, warm (not hot) butter (or clarified butter) is added slowly to the sauce in dribbles. The sauce can be served promptly, at room temperature, or having being brought to room temperature after refrigeration. It freezes well, easier to thaw and reconstitute if frozen in portions.

One family of methods involves acidifying the egg yolks to aid in the formation of an emulsion, either with lemon juice or vinegar. Escoffier[4] uses a reduction of vinegar and water. Others[5][6] use lemon juice or sherry.[7] The acidified yolks are whisked gently over simmering water[8] until they thicken and lighten in color (144 °F/62 °C). Then, as with a mayonnaise,[9] the emulsion is formed by very slowly whisking melted butter into it. Use of clarified butter is common. Some varieties of this preparation use water of various volume and temperatures.[7]

Alton Brown espouses quite a different method.[10] The yolks, without acid, are cooked as above. Then the upper pan is removed from heat and cold cubed butter (unclarified) is whisked in, a few cubes at a time. The emulsion forms as the cubes melt. The pan is returned to heat only when the emulsion cools too much to melt more cubes. Lemon is used as a finishing flavor. This method takes more time than traditional methods, but is more reliable in that, it is difficult to overheat the forming emulsion.[11]

Joy of Cooking[7] describes a preparation unlike all the above, using whole eggs, and slowly adding the egg mixture to melted butter over direct heat. It also includes variations incorporating sour cream and paprika, or cream and nutmeg.[7]

Note that in all methods the temperature must be closely controlled. Too much heat and the yolks will curdle (180 °F/82 °C) or an emulsion break (separate).[13] Too little heat and an emulsion will fail to form, or (once formed), will solidify.[13] Once the yolks are prepared, the sauce should be not much warmer than required to maintain the butter in a liquid state, that is, a little warmer than body temperature. Be sure to consider both the temperature of the yolks and emulsion and that of the melted butter. A finished sauce may be "held" in its emulsified state for several hours by keeping it warm. Success with freezing Hollandaise has been reported,[14][15] but it is not widely practiced.

A normal ratio of ingredients is 1 egg yolk : 4-6 Tbs. butter. Flavorings may include lemon juice and salt to taste.[16]

Being a mother sauce, Hollandaise sauce is the foundation for many derivatives created by adding or changing ingredients. The following is a non-exhaustive listing of such minor sauces.

In the 1936 film Desire, Marlene Dietrich's character keeps proposing "some more" sauce hollandaise "with the fricassee of chicken" in a tense scene of dialogue between her lover (Gary Cooper) and her partner in theft.[29]