Single infobox
Name = Here Without You 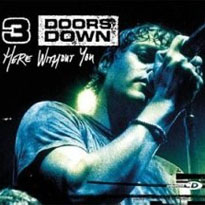 "Here Without You" is a by the band . It was released as the third single from the album .

It was one of the longest charting singles in history on AT40 (American Top 40) and it charted in the top 40 for around 60 weeks, peaking at #5. Only "Kryptonite" and "When I'm Gone" reached higher positions. It has since been certified 4x Platinum in the United States and Platinum in Australia. Along with "When I'm Gone", it proved to be the most successful single from the band's album.

It was featured on the video game and the game as downloadable content on the and .

In , mashup-artist Norwegian Recycling featured this song in a mashup along with 's "I'm Yours", 's "", 's "", 's "Always Getting over You" and 's "". A video for was also made. The song and the video were featured at the Mashuptown .

A remix of this song was released featuring .