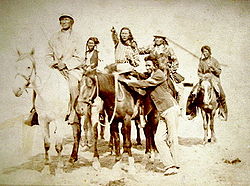 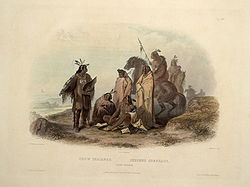 The Crow, also called the Absaroka or Apsáalooke, are a Siouan people of Native Americans who historically lived in the Yellowstone River valley. They now live on a reservation south of Billings, Montana. Tribal headquarters are located at Crow Agency, Montana.

The name of the tribe, Apsáalooke [əˈpsaːloːke], was translated into French by interpreters as gens du corbeaux (people of [the] crows). It means "children of the large-beaked bird," [1] a name given by their neighboring tribe, the Hidatsa. The bird, perhaps now extinct, was defined as a fork-tailed bird resembling the blue jay or magpie. In 1743 the Absaroka first encountered people of European descent - the two La Vérendrye brothers from French Canada. The explorers called the Apsáalooke beaux hommes (handsome men). The Crow called the French Canadians baashchíile (persons with yellow eyes).

Some historians believe the early home of the Crow-Hidatsa ancestral tribe was near the headwaters of the Mississippi River in either northern Minnesota or Wisconsin; others place them in the Winnipeg area of Manitoba. Later the people moved to the Devil's Lake region of North Dakota before the Crow split from the Hidatsa and moved westward. The Crow were largely pushed westward by the intrusion and influx of the Sioux, the Sioux being pushed West by American expansion. Once established in Montana and Wyoming, the Crow eventually divided into three groups: the Mountain Crow, River Crow and Kicked in the Bellies.

Groups of the Crow

The Apsaalooke were divided into three independent groupings, that only came together for common defense:[2]

The oral tradition of the Apsaalooke also mentions a fourth group, the Bilapiluutche (‘Beaver Dries its Fur’), which probably merged with the Kiowa in the second half of the eighteenth century. 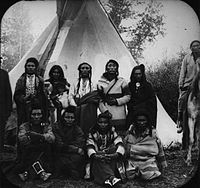 Group of Crow men seated in front of a tipi. 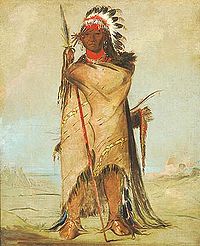 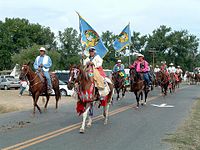 Pauline Small on horseback. She carries the flag of the Crow Tribe of Indians. As a tribal official, she is entitled to carry the flag during the Crow Fair Parade.

Traditional Crow shelters are tipis made with bison skins stretched over wooden poles. The Crow are historically known to construct some of the largest tipis. Inside the tipi, mattresses and buffalo-hide seats were arranged around the edge, with a fireplace in the center. The smoke from the fire escaped through a hole in the top of the tipi. Many Crow families still own and use the tipi, especially when traveling. The annual Crow Fair has been described as the largest gathering of tipis in the world.

The Crow wore clothing distinguished by gender. Women wore simple clothes - dresses made of deer and buffalo skins, decorated with elk teeth. They covered their legs with leggings during winter and their feet with moccasins. Crow women wore their hair in two braids, unlike the men. Male clothing usually consisted of a shirt, trimmed leggings with a belt, a robe, and moccasins. Their hair was long, in some cases reaching or dragging the ground,[5] and often part was styled into a pompadour.

The Crows' main source of food was bison, but they also hunted mountain sheep, deer, and other game. Buffalo meat was often roasted or boiled in a stew with prairie turnips. The rump, tongue, liver, heart, and kidneys all were considered delicacies. Dried bison meat was ground with fat and berries to make pemmican.

The Crow had more horses than any other Plains tribe; in 1914 they numbered approximately thirty to forty thousand head. By 1921 the number of mounts had dwindled to just one thousand. They also had many dogs; one source counted five to six hundred. Unlike some other tribes, they did not eat dog but used them as guards, to carry burdens and to hunt. The Crow were a nomadic people.

The Crow had a matrilineal system. After marriage, the couple was matrilocal (the husband moved to the wife's mother's house upon marriage). Women held a significant role within the tribe.

Crow kinship is a system used to define family. Identified by Lewis Henry Morgan in his 1871 work Systems of Consanguinity and Affinity of the Human Family, the Crow system is one of the six major types among indigenous people which he described: Eskimo, Hawaiian, Iroquois, Crow, Omaha, and Sudanese .

The seat of government and capital of the Crow Indian Reservation is Crow Agency, Montana.

According to the 1948 Constitution, Resolution 63-01, all constitutional amendments must be voted on by secret ballot or referendum vote. In 2001, major actions were taken by the former Chairperson Birdinground without complying with those requirements. The quarterly council meeting on July 15, 2001 passed all resolutions by voice vote, including the measure to repeal the current constitution and approve a new constitution. An opposition has arisen to challenge the new constitution's validity. The challenge is now in Crow Tribal Courts awaiting a decision.

Critics contend the new constitution is contrary to the spirit of the Crow Nation, as it provides authority for the US Bureau of Indian Affairs (BIA) to approve Crow legislation and decisions. The Crow people have guarded their sovereignty and Treaty Rights. The alleged New Constitution was not voted on to add it to the agenda of the Tribal Council. The former constitution mandated that constitutional changes be conducted by referendum vote, using the secret ballot election method and criteria. In addition, a constitutional change can only be conducted in a specially called election, which was never approved by council action for the 2001 Constitution. The agenda was not voted on or accepted at the council.

The only vote taken at the council was whether to conduct the voting by voice vote or walking through the line. Critics say the Chairman ignored and suppressed attempts to discuss the Constitution. This council and constitutional change was never ratified by any subsequent council action. The Tribal Secretary, who was removed from office by the BirdinGround Administration, was the leader of the opposition. All activity occurred without his signature.

When the opposition challenged, citing the violation of the Constitutional Process and the Right to Vote, the Birdinground Administration sought the approval of the United States Department of the Interior (USDOI), Bureau of Indian Affairs (BIA). The latter stated it could not interfere in an internal tribal affair. The federal court also ruled that the constitutional change was an internal tribal matter.[citation needed]

Crow Tribal Council Chairperson Carl Venne and Barack Obama at the presidential campaign rally for Obama on the Crow Indian Reservation in Montana on May 19, 2008. Obama was the first presidential candidate to visit the Crow Nation.

On May 19, 2008, Hartford and Mary Black Eagle of the Crow Nation adopted U.S. Senator (now President) Barack Obama into the tribe on the date of the first visit of a U.S. presidential candidate to the nation.[6] Crow representatives also took part in President Obama's inaugural parade. In 2009 Dr. Joseph Medicine Crow was one of 16 people awarded the Presidential Medal of Freedom.

Edgar Allan Poe's 1838 novel The Narrative of Arthur Gordon Pym of Nantucket features a character, Dirk Peters, who is the son of an Upsaroka (Absaroka) mother and a French father.

The cover of the popular music album America, which contained the Top Ten song, "Horse With No Name," featured the three group members sitting on the floor in front of a mural of Eight Crows.

The tribe hosts a large pow wow, rodeo, and parade annually; the 86th Crow Fair was held in Crow Agency from August 17–21, 2006. Called Baasaxpilue (to make much noise), it is the largest and most spectacular of Indian celebrations in the northern Plains.[7] The photographer Elsa Spear Byron photographed the Crow Fair from 1911 to the 1950s.

Angus Young, a Crow elder and historian, and professor at Little Big Horn College, was featured on the 2006 installment of the PBS television series Frontier House.[8]

In the documentary Native Spirit and the Sun Dance Way (2007), Thomas Yellowtail, a Crow medicine man and Sun Dance chief for more than 30 years, describes and explains the ancient Sun Dance ceremony, which is sacred to the Crow tribe. In the 1994 film Legends of the Fall, based on the 1979 novella of the same name by Jim Harrison, actor Gordon Tootoosis spoke Yellowtail's words to examine the preservation of a cultural and spiritual world before the coming of European settlers.