The Royal Picture Gallery Mauritshuis (English: "Maurice House") is an art museum in The Hague, the Netherlands. Previously the residence of count John Maurice of Nassau, it now has a large art collection, including paintings by Dutch painters such as Johannes Vermeer, Rembrandt van Rijn, Jan Steen, Paulus Potter and Frans Hals and works of the German painter Hans Holbein the Younger. 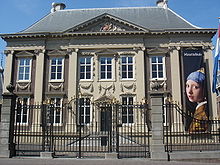 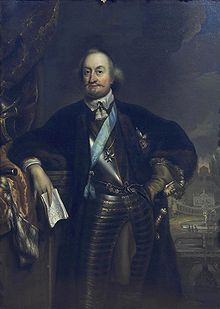 In 1631, army officer John Maurice, Prince of Nassau-Siegen (1604–1679), who was a cousin of stadtholder Frederick Henry, Prince of Orange, bought a plot bordering the Binnenhof and the adjacent pond named Hofvijver (English: "Court's Pond") in the The Hague, Holland, Dutch Republic.[4] At that time, The Hague was the political center of the Dutch Republic and the States-General assembled in the Binnenhof.

The Mauritshuis was named after Prince John Maurice and was built between 1636 and 1641, the period when he was the governor of Dutch Brazil. The Dutch Classicist building was designed by the Dutch architects Jacob van Campen and Pieter Post.[5] The two-storey building is strictly symmetrical contained four apartments and a great hall. Each apartment was designed with an antechamber, a chamber, a cabinet, and a cloakroom. Originally, the building had a cupola, which was destroyed in a fire in 1704.[6]

After the death of Prince John Maurice in 1679, the house was owned by the Maes family, who leased the house to the Dutch government. In 1704, most of the interior of the Mauritshuis was destroyed by fire. The building was restored between 1708 and 1718.[7] In 1820, the Mauritshuis was bought by the Dutch state for the purpose of housing the Royal Cabinet of Paintings.[8]

The Mauritshuis was a state museum until it was privatised in 1995. The foundation set up at that time took charge of both the building and the collection, which it was given on long-term loan. This building, which is the property of the state, is rented by the museum. The museum collaborates regularly with museums in other countries.[citation needed]

The collection of paintings of stadtholder William V, Prince of Orange was handed over to the Dutch state by his son king William I. This collection formed the basis of the Royal Cabinet of Paintings of around 200 paintings. The collection is currently called the Royal Picture Gallery. The current collection consists of almost 800 paintings[9] and focusses on Dutch and Flemish artists, such as Pieter Brueghel, Paulus Potter, Pieter Paul Rubens, Rembrandt van Rijn, Jacob van Ruisdael, Johannes Vermeer, and Rogier van der Weyden. There are also works of Hans Holbein in the collection in the Mauritshuis.[10][11][12]