IADT - Dun Laoghaire Institute of Art, Design and Technology (Irish: Institiúid Ealaíona,Dearadh agus Teicneolaíochta Dhún Laoghaire) is located at Dún Laoghaire, Ireland was established in 1997 and incorporated the former Dun Laoghaire College of Art and Design as its School of Creative Arts. 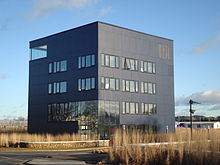 TheMedia Cube situated at the entrance to the institute.

Dun Laoghaire Institute of Art, Design and Technology (IADT) is currently located on Kill Avenue, about two kilometers west of Dun Laoghaire on the 75 / 46A bus route, close to Bakers Corner and Deansgrange. The former Dún Laoghaire College of Art and Design (now the School of Creative Arts at IADT) moved to the campus in the early 1980s. This move facilitated an expansion of facilities and led to the creation of IADT in 1997.

The Institute's site is formally a Christian Brothers home (Carriglea Park Industrial School, 1894–1954). In the 2009 Report on child abuse, the Christian Brothers were found to be seen in a relatively favourable, if incompetent, light in comparison to abuses in other industrial schools, and still play a key part in the Dun Laoghaire area, albeit entirely separate to the Dun Laoghaire campus.

Prior to being bought by the Christian Brothers, Carriglea was a 40-acre (160,000 m2) Georgian residence owned by the Goff Family. The Reverend Robert Goff purchased the estate in 1826 for use as his principal residence. The Reverend Goff died in 1844 and the estate passed to his wife and family. Both the Reverend Robert Goff and his wife are interred in the church in Monkstown. IADT has a collection of diaries written by the Reverend Goff from the late 18th Century until his death.

In recent times, the college has developed new amenities such as the Media Cube for enterprise projects and SMEs in the technology sector and is currently expanding its campus to incorporate further departments and students. Additional sports facilities such as a full sized all weather floodlight soccer pitch have been added in recent years.

The institution has a particularly strong emphasis on creative arts and media with the National Film School (NFS) located on campus. The college also offers programmes in entrepreneurship/business, arts management, psychology/cyberpsychology, computing and digital media technology.

A strong emphasis is placed on the convergence of the arts, technology and enterprise. A flagship campus incubation centre called Media Cube[1] supports the graduate enterprise development programme and accommodates start-up business in the media and digital media sectors.

School of Business and Humanities

The school of Business and Humanities was established in 1998 and focuses on the knowledge, media and entertainment sectors.

The Business Studies and Arts Management Course has undergone significant change in the past four years.[citation needed]

The National Film School offers the only BA Honours in Film and Television Production in the country, although the Huston School in Galway, Galway-Mayo Institute of Technology and Ballyfermot College of Further Education in Dublin do offer diplomas in film related studies. The National Film School is part of The School of Creative Arts and also offers a degrees in Animation, Model Making, Makeup and Costume Design allowing students of different disciplines to work together on projects. Notable visiting lectures over the years include Jim Sheridan, Oliver Stone, John Boorman, Neil Jordan, Stephen Frears, Stephen Rea and John Landis Additional programmes in the School of Creative Arts include Photography, Visual Arts Practice and Visual Communications.

Some student projects in IADT Dun Loaghaire have achieved notable acclaim such as a project by Gobias productions, a group of five students from IADT. In this project, the students developed a student film called, "On the cutting room floor." They went on to win all the judges categories in the student film competition at the DARE2BDRINKAWARE awards ceremony. The award ceremony is for third level students in Ireland and is organised by the digital Hub Development Agency (DHDA).[4]