Fritz Bleyl poster for the first Die Brücke show in 1906 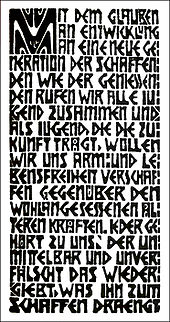 Die Brücke (The Bridge) was a group of German expressionist artists formed in Dresden in 1905, after which the Brücke Museum in Berlin was named. Founding members were Fritz Bleyl, Erich Heckel, Ernst Ludwig Kirchner and Karl Schmidt-Rottluff. Later members were Emil Nolde, Max Pechstein and Otto Mueller. The seminal group had a major impact on the evolution of modern art in the 20th century and the creation of expressionism.[1]

Die Brücke is sometimes compared to the Fauves. Both movements shared interests in primitivist art. Both shared an interest in the expressing of extreme emotion through high-keyed color that was very often non-naturalistic. Both movements employed a drawing technique that was crude, and both groups shared an antipathy to complete abstraction. The Die Brücke artists' emotionally agitated paintings of city streets and sexually charged events transpiring in country settings make their French counterparts, the Fauves, seem tame by comparison.[2]

The founding members of Die Brücke in 1905 were four Jugendstil architecture students: Fritz Bleyl (1880–1966), Erich Heckel (1883–1970), Ernst Ludwig Kirchner (1880–1938) and Karl Schmidt-Rottluff (1884–1976). They met through the Königliche Technische Hochschule (technical university) of Dresden, where Kirchner and Bleyl began studying in 1901 and became close friends in their first term.[3] They discussed art together and also studied nature,[3] having a radical outlook in common.[4] Kirchner continued studies in Munich 1903–1904, returning to Dresden in 1905 to complete his degree.[5] The institution provided a wide range of studies in addition to architecture, such as freehand drawing, perspective drawing and the historical study of art.[6]

Die Brücke aimed to eschew the prevalent traditional academic style and find a new mode of artistic expression, which would form a bridge (hence the name) between the past and the present.[4] They responded both to past artists such as Albrecht Dürer, Matthias Grünewald and Lucas Cranach the Elder, as well as contemporary international avant-garde movements.[4]

As part of the affirmation of their national heritage, they revived older media, particularly woodcut prints.[4] The group developed a common style based on vivid color, emotional tension, violent imagery, and an influence from primitivism. After first concentrating exclusively on urban subject matter, the group ventured into southern Germany on expeditions arranged by Mueller and produced more nudes and arcadian images. They invented the printmaking technique of linocut, although they at first described them as traditional woodcuts, which they also made.[7]

The group members initially "isolated" themselves in a working-class neighborhood of Dresden, aiming thereby to reject their own bourgeois backgrounds. Erich Heckel was able to obtain an empty butcher's shop on the Berlinerstrasse in Friedrichstadt for their use as a studio.[8] Bleyl described the studio as:

that of a real bohemian, full of paintings lying all over the place, drawings, books and artist’s materials — much more like an artist’s romantic lodgings than the home of a well-organised architecture student.[4] 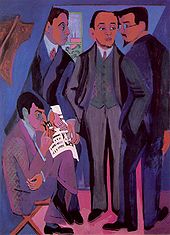 Painting of the group members by Ernst Ludwig Kirchner 1926/7

Kirchner's became a venue which overthrew social conventions to allow casual love-making and frequent nudity.[4] Group life-drawing sessions took place using models from the social circle, rather than professionals, and choosing quarter-hour poses to encourage spontaneity.[4] Bleyl described one such model, Isabella, a fifteen-year-old girl from the neighbourhood, as "a very lively, beautifully built, joyous individual, without any deformation caused by the silly fashion of the corset and completely suitable to our artistic demands, especially in the blossoming condition of her girlish buds."[9]

The group composed a manifesto (mostly Kirchner's work), which was carved on wood and asserted a new generation, "who want freedom in our work and in our lives, independence from older, established forces."[4]

In September and October 1906, the first group exhibition was held, focused on the female nude, in the showroom of K.F.M. Seifert and Co. in Dresden.[9]

Between 1907 and 1911, Brücke members stayed during the summer at the Moritzburg lakes and on the island of Fehmarn.[5] In 1911, Kirchner moved to Berlin, where he founded a private art school, MIUM-Institut, in collaboration with Max Pechstein with the aim of promulgating "Moderner Unterricht im Malen" (modern teaching of painting). This was not a success and closed the following year.[5]

In 1913, Kirchner wrote Chronik der Brücke (Brücke chronicle), which led to the ending of the group.[5]

A successor group formed in 1919, the Dresdner Sezession, including painter Conrad Felixmüller.

Die Brücke was one of two groups of German painters fundamental to Expressionism, the other being Der Blaue Reiter group ("The Blue Rider"), formed in Munich in 1911.