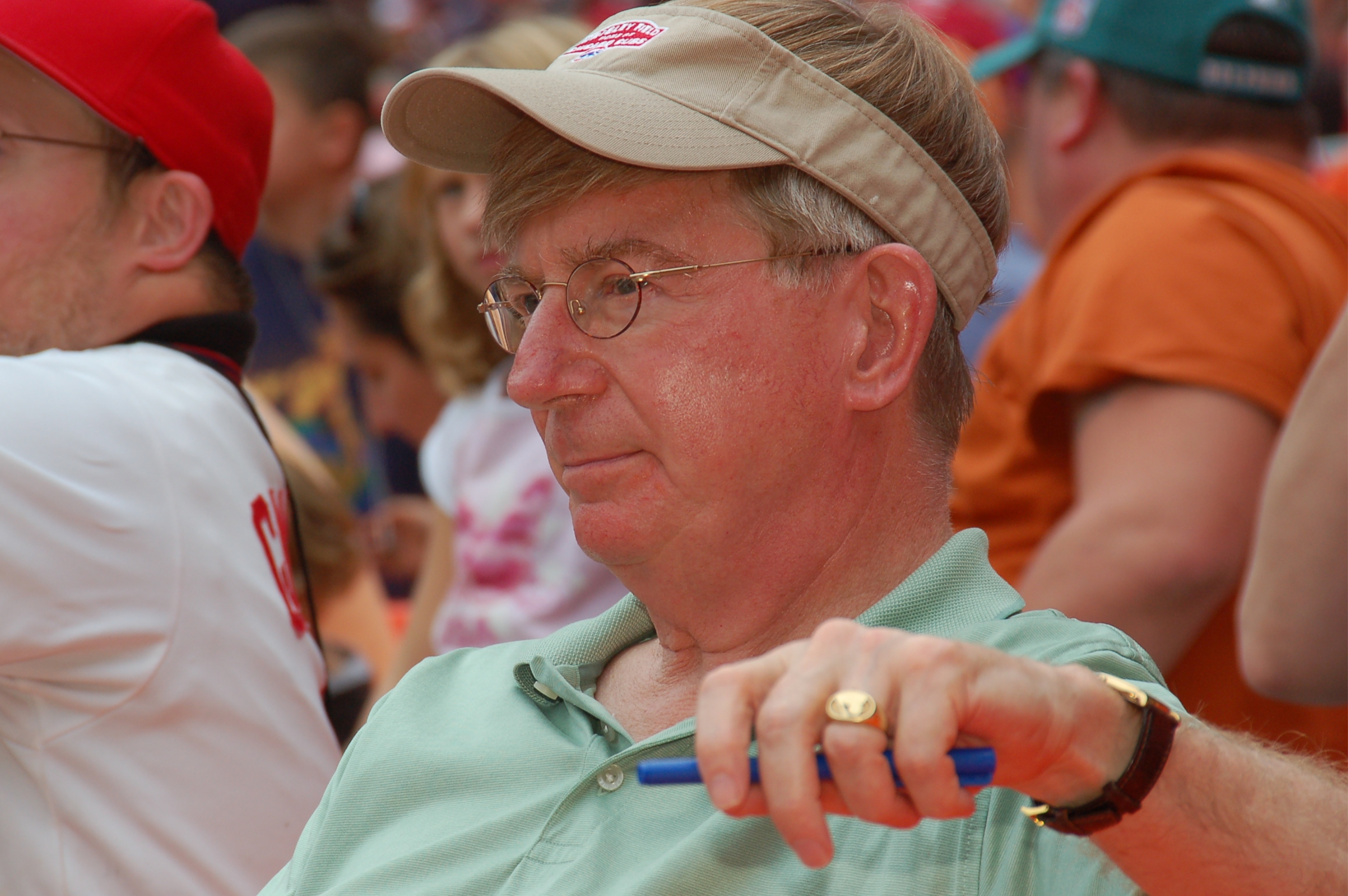 George Frederick Will (born , ) is a -winning conservative American newspaper , journalist, and .

George Frederick Will was born on , in Champaign, , the son of Frederick L. Will and Louise Hendrickson Will. [cite news|accessdate=
url=http://www.washingtonpost.com/wp-dyn/content/article/2006/07/12/AR2006071201873.html
title=A Mother's Love, Clarified
author=Will, George F.
page=A23
work=Washington Post
date=, ] His father Fred was a respected professor of philosophy, specializing in , at the .

Will graduated from , and attended Trinity College, in Hartford, (B.A.). He subsequently read PPE at Magdalen College, (B.A., M.A.), and received M.A. and Ph.D. degrees in politics from . His 1968 Ph.D. dissertation was entitled "Beyond the Reach of Majorities: Closed Questions in the Open Society".

Will served as an editor for the conservative magazine "" from 1972 to 1978. He joined the "" Writers Group in 1979, writing a syndicated twice-weekly column, which became widely circulated among newspapers across the country. In 1976, he became a contributing editor for "", writing a biweekly backpage column. As of 2008, Will still writes both columns.

Will was widely praised by liberals for condemning the corruption of the Nixon presidency. He won a for "distinguished commentary on a variety of topics" in 1977. Often combining factual reporting with conservative commentary, Will's columns are known for their erudite vocabulary, allusions to political philosophers, and frequent references to .

Will has also written two best-selling books on the game of baseball, three books on political philosophy, and has published eleven compilations of his columns for the "Washington Post" and "Newsweek" and of various book reviews and lectures.

;1980 Ronald Reagan presidential campaign:Will's detractors complain about instances when Will has blurred the line between independent journalist and political advocate. Will helped prepare for his 1980 debate against , breaking with the journalistic tradition of neutrality. Immediately after the debate, Will—not yet a member of the staff—appeared on ABC's "Nightline". He was introduced by host , who said "It's my understanding that you met for some time yesterday with Governor Reagan," and that Will "never made any secret of his affection" for the Republican candidate. It was not explicitly disclosed that Will had assisted with or been present during Reagan's debate preparation. Will went on to praise Reagan, saying his "game plan worked well. I don't think he was very surprised". ["Nightline Special Edition", , ]

Twenty-four years later, appearing on a program, Carter stated that before the 1980 debate, Will gave the Reagan campaign a top-secret briefing book stolen from Carter's office. ["", , .] According to a report, he repeated this accusation in 2005 ("The Alabama Plainsman", , ). In a 2005 syndicated column, Will called his role in Reagan's debate preparation "inappropriate" but denied any role in stealing the briefing book. As he had done to Carter privately, Will wrote in his column that he gave the book a "cursory glance" and found it a "crashing bore and next to useless—for [Carter] , or for anyone else". [ "Washington Post", , .] In response to the column, Carter wrote a letter to the "Washington Post" retracting his accusations. Carter apologized to Will for "any incorrect statement that I have ever made about his role in the use of my briefing book ... I have never thought Mr. Will took my book". ["Washington Post", , .]

;1996 Bob Dole presidential campaign:The national media watchgroup Fairness & Accuracy in Reporting (FAIR) criticized Will in connection with the 1996 election, for "commenting on the presidential race while his second wife, Mari Maseng Will, was a senior staffer for the Dole presidential campaign," including commenting on a Dole speech without disclosing that his wife had helped write it. However, Will mentioned his wife's connection to the Dole campaign almost weekly on "This Week".

;2003 Association with Conrad Black:Will was criticized for his dealings with Canadian-born British financier .

;2008 Offshore drilling by China:In a "Washington Post" column on , , Will stated that "Drilling is underway convert|60|mi|km off Florida. The drilling is being done by China, in cooperation with Cuba, which is drilling closer to South Florida than U.S. companies are." This statement is false. It was later quoted and subsequently withdrawn by after Congressional Democrats, backed by energy experts, pointed out the error. House Leader also cited the incorrect statement: "Right at this moment some convert|60|mi|km or less off the coast of Key West, Fla., China has the green light to drill for oil." [cite news|accessdate=
url=http://www.washingtonpost.com/wp-dyn/content/article/2008/06/04/AR2008060403052.html?nav=rss_opinion/columns
title=The Gas Prices We Deserve
author=Will, George F.
date=,
page= A19
work=Washington Post] [cite news|accessdate=
url=http://news.yahoo.com/s/ap/20080613/ap_on_go_pr_wh/cheney_oil_drilling
title=Yahoo!News article on Cheney's comment on oil drilling
date=, ]

In a , column, George Will issued a correction: "In a previous column, I stated that China, in partnership with Cuba, is drilling for oil convert|60|mi|km from the Florida coast. While Cuba has partnered with Chinese companies to drill in the Florida Straits, no Chinese company has been involved in Cuba's oil exploration that close to the United States."

;2008 Comment on Barack Obama:On , on ABC's "This Week", in a discussion of whether presidential candidate Sen. Barack Obama is "uppity," George Will said that the "crowning, crashing irony of this year is that the first African American candidate for president to be nominated by a major party has the weakness of being too upper crust. That is, he's Columbia University, he's Harvard Law School." Though George Will himself received his education at Trinity College, in Hartford, Connecticut (B.A.), Oxford University (M.A.) and Princeton (Ph.D.), he was illustrating the fact that even African Americans who are generally viewed as an underprivileged minority in the United States can find themselves comfortable and at home among the 'elite'.

Criticism of the Bush administration

George Will served as one of the opponents within the Beltway media of the nomination of to the .

Will has also recently expressed reservations about the policies the Bush administration has chosen to pursue with respect to , and has become openly critical of what he perceives to be an unrealistically optimistic set of political scenarios outlined by the White House.

In March 2006, in a column penned in the aftermath of the apparently sectarian bombing of the Askariya Shrine in , , Will challenged the Bush administration&mdash;and the representatives of the U.S. government stationed in Iraq&mdash;to be more honest about the difficulties the United States faced in rebuilding and maintaining order within Iraq, comparing the White House's rhetoric unfavorably to that of during the early years of . The optimistic assessments delivered by the Bush administration were described by Will as the "rhetoric of unreality." [cite news|accessdate=
url=http://www.washingtonpost.com/wp-dyn/content/article/2006/03/01/AR2006030101935.html
title=Rhetoric of Unreality: Where Is Iraq After Nearly 3 Years of War?
author=Will, George F.
page=A21
work=
date=, ]

Will repeated this criticism of the Bush Iraq policy and broader White House and congressional foreign and domestic policymaking, as part of his keynote address for the 's 2006 Milton Friedman Prize dinner.

Will has three children with his first wife, Madeleine. One of these children, Jon, was born in 1972 with , which Will has written about in his column on occasion. [cite web |accessdate= 2008-09-07
url=http://www.washingtonpost.com/wp-dyn/articles/A51671-2005Apr13.html
title=Eugenics By Abortion: Is perfection an entitlement?
author=Will, George F.
work=
date=, ] [cite web |accessdate=
url=http://www.msnbc.msn.com/id/16720750/site/newsweek
title=Will: The Attack on Kids With Down Syndrome
author=Will, George F.
work=Newsweek
date=,
archiveurl=http://web.archive.org/web/20070516125514/http://www.msnbc.msn.com/id/16720750/site/newsweek
archivedate=2007-05-17] In 1991, Will married Mari Maseng, a former Reagan presidential speechwriter and former communications director for . They have one child, a son named David, and live in the Washington D.C. area.

Will is a fan.

On , , Will stated in an interview on "" that he was an because he was "not decisive enough to be an ". [cite web
url=http://www.comedycentral.com/colbertreport/videos.jhtml?videoId=171135
title=George Will
work=The Colbert Report
publisher=Comedy Central
date=,
accessdate=2008-06-05]

*In the "" Season 6 episode "", when asked if he was able to find another man attractive, responds that he finds Will handsome, citing his clean looks, but does not think he is "all that bright."
*In 's "Tax Guide" column, Barry states that "if the IRS asks where you got this information, remember to give them my full name, George Will."
*In a season one episode of "" ("Jack-tor"), , who was thought to be illiterate, is seen reading a newspaper in an elevator remarking, "Damn, George Will keeps getting more and more conservative."
* has referenced him at least twice in his "" comic strip series: In one strip, Opus, while fretting about his campaign as vice president, mentions being criticized by Will. Also in Bloom County's Sunday-only , "Outland", Opus, attending the monthly meeting of "Free Thinkers of the Meddow", informs the others that "George Will sends his regrets", causing the others to moan "Awwwww"!".
*For a week in the mid 1980's, centered its strip on the adventures of one of Will's fictional interns, drawing attention to his erudite language and mannerisms.