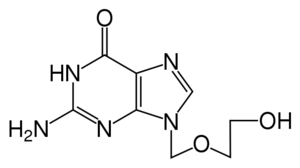 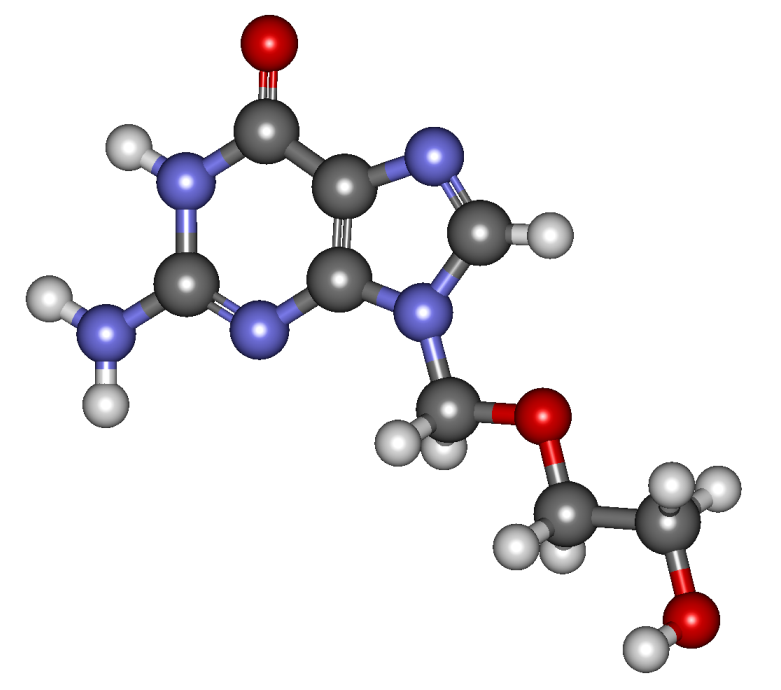 Aciclovir (INN) (pronEng|eɪˈsaɪkloʊvɪr) or acyclovir (USAN, former BAN), chemical name acycloguanosine, is a analogue , marketed under trade names such as "Cyclovir", "Herpex", "Acivir", "Zovirax" and "Zovir" (GSK). One of the most commonly-used antiviral drugs, it is primarily used for the treatment of infections, as well as in the treatment of herpes zoster (shingles).

Aciclovir was seen as the start of a new era in antiviral therapy, as it is extremely selective and low in . Pharmacologist was awarded the Nobel Prize in Medicine, partly for the development of aciclovir.

Aciclovir differs from previous in that it contains only a partial structure: the sugar ring is replaced by an open-chain structure. It is selectively converted into acyclo- (acyclo-GMP) by viral , which is far more effective (3000 times) in than cellular thymidine kinase. Subsequently, the "monophosphate" form is further phosphorylated into the active "triphosphate" form, acyclo- (acyclo-GTP), by cellular s. Acyclo-GTP is a very potent inhibitor of viral ; it has approximately 100 times greater affinity for viral than cellular polymerase. As a substrate, acyclo-GMP is incorporated into viral DNA, resulting in chain termination. It has also been shown that viral s cannot remove acyclo-GMP from the chain, which results in inhibition of further activity of DNA polymerase. Acyclo-GTP is fairly rapidly metabolised within the cell, possibly by cellular s.

In sum, aciclovir can be considered a : it is administered in an inactive (or less active form) and is metabolised into a more active species after administration.

Aciclovir is active against most species in the family. In descending order of activity:

Activity is predominantly against HSV, and to a lesser extent VZV. It is only of limited efficacy against EBV and CMV. It is inactive against latent viruses in nerve ganglia.

Aciclovir is poorly water soluble and has poor oral (10–20%), hence administration is necessary if high concentrations are required. When orally administered, peak plasma concentration occurs after 1–2 hours. Aciclovir has a high distribution rate, only 30% is protein-bound in plasma. The of aciclovir is approximately 3 hours. It is renally excreted, partly by glomerular filtration and partly by tubular secretion.

Aciclovir is indicated for the treatment of HSV and VZV infections, including:

It has been claimed that the evidence for the effectiveness of topically applied cream for recurrent labial outbreaks is weak. [cite journal
author=Graham Worrall
title=Evidence for efficacy of topical aciclovir in recurrent herpes labialis is weak
journal=BMJ | year=1996 | month=6 Jul | volume=313 | pages=46
url=http://www.bmj.com/cgi/content/full/313/7048/46/a - Letter] An earlier review of scientific literature showed that there is some effect in reducing the number and duration of lesions if aciclovir is applied at an early stage of an outbreak. [cite journal | author=Graham Worrall | title=Acyclovir in recurrent herpes labialis | journal=BMJ | year=1996 | month=6 Jan | volume=312 | pages=6 | url=http://www.bmj.com/cgi/content/full/312/7022/6 | pmid=8555890 - Editorial] However, it was concluded that oral therapy for episodes is inappropriate for most non-immunocompromised patients based on costs and benefits, presumably in countries where aciclovir is only available on prescription. It was concluded that there is evidence for an oral prophylactic role in preventing recurrences.

Additional common adverse effects, when acyclovir is administered IV, include (1% of patients) and injection site reactions. The injection formulation is ( 11), and may cause local tissue pain and irritation. Renal impairment has been reported when acyclovir is given in large, fast doses intravenously, due to the crystallisation of acyclovir in the kidneys.

Acyclovir topical cream is commonly associated (≥1% of patients) with: dry or flaking skin and/or transient stinging/burning sensations. Infrequent adverse effects include and/or itch.

When applied to the eye, acyclovir is commonly associated (≥1% of patients) with transient mild stinging. Infrequently (0.1–1% of patients), ophthalmic aciclovir is associated with superficial and/or allergic reactions.