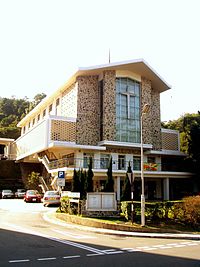 The chapel of Chung Chi College

The Chung Chi College (Chinese: 崇基學院) is one of the constituent colleges of The Chinese University of Hong Kong (CUHK), and one of the three original colleges that joined to form the CUHK in 1963. Founded in 1951 by representatives of Protestant churches in Hong Kong, it was formally incorporated under the Chung Chi College Incorporation Ordinance in 1955.

Among the colleges of CUHK, Chung Chi is the only one with a religious background.

In the early 1950s, Christian universities in mainland China were shut down as a result of the communist takeover. Many young people had come to Hong Kong and wished to continue their studies in the territory. By then there was only one university - The University of Hong Kong - with a medium of instruction in the English. It was difficult for secondary school graduates in mainland China to further their studies.

When it was founded, students of the college had their lessons in the Anglican St. John's Cathedral and the Anglican St. Paul's Co-educational College, with sponsorhsip from the United Board for Christian Higher Education in Asia of the United States, The Lingnan Foundation based in New York, and Association of Christian Universities and Colleges in Asia of London. Later its campus was set up in rented residences in Caine Road, and the Anglican Joseph Charles Hoare Memorial Church in Lower Albert Road. It moved to its present site in the Ma Liu Shui Valley, finally, in 1956.