Cuyahoga Valley National Park preserves and reclaims the rural landscape along the Cuyahoga River between Akron and Cleveland in Northeast Ohio. The 51-square-mile (130 km2) park is the only national park in Ohio.

The valley began providing recreation for urban dwellers in the 1870s when people came from nearby cities for carriage rides or leisure boat trips along the canal. In 1880, the Valley Railroad became another way to escape urban industrial life. Actual park development began in the 1910s and 1920s with the establishment of Cleveland and Akron metropolitan park districts. In 1929 the estate of Cleveland businessman Hayward Kendall donated 430 acres (1.7 km2) around the Richie Ledges and a trust fund to the state of Ohio. Kendall's will stipulated that the "property should be perpetually used for park purposes". It became Virginia Kendall park, in honor of his mother. In the 1930s, the Civilian Conservation Corps built much of the park's infrastructure including what are now Happy Days Lodge and the shelters at Octagon, Ledges, and Kendall Lake.

Although regional parks safeguarded certain places, by the 1960s local citizens feared that urban sprawl would overwhelm the Cuyahoga Valley's natural beauty. Active citizens joined forces with state and national government staff to find a long term solution. Finally, on December 27, 1974, President Gerald Ford signed the bill establishing the Cuyahoga Valley National Recreation Area. The area was redesignated a national park by Congress on October 11, 2000,[3] with the passage of the Department of the Interior and Related Agencies Appropriations Act, 2001, House Bill 4578, 106th congress.[4] It is administered by the National Park Service. David Berger National Memorial in Beachwood, Ohio is also managed through Cuyahoga Valley National Park.

The Richfield Coliseum, a multipurpose arena in the Cuyahoga River area, was demolished in 1999 and the now-empty site became part of Cuyahoga Valley National Park upon its designation in 2000. It has since become a grassy meadow popular with birdwatchers. 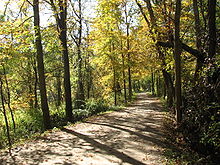 Many visitors spend their time hiking or bicycling the parks' many trails which visit its numerous attractions, including the crushed limestone along portions of the 20 miles (32.2 km) Towpath Trail, following a former stretch of the 308 miles (495.7 km) Ohio and Erie Canal.

Waterfalls, rolling hills, caves, winding river scenery attract many park visitors. Steep narrow ravines, a rolling floodplain, and lush farmland contrast one another throughout the park. Animal life is also plentiful. The Ledges provides a boulder-strewn cliff to relax and watch the sunset over the wooded scenery below. Sled-riding is popular during the winter at Happy Days Park.

The park offers an array of preserved and restored displays of 19th and early 20th century sustainable farming and pastoral or rural living, while catering to contemporary interests with art exhibits, outdoor concerts, and scenic excursion and special event railroad tours on the Cuyahoga Valley Scenic Railroad.[5]

It includes compatible-use sites not owned by the federal government, including several local regional parks in the Cleveland Metroparks and Metro Parks, Serving Summit County systems, Blossom Music Center, and the Hale Farm & Village. In the mid 1980s, the park hosted the National Folk Festival. 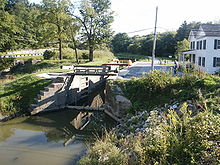 The Towpath Trail follows the historic route of the Ohio & Erie Canal. Before the canal was built, Ohio was a sparsely settled wilderness where travel was difficult and getting crops to market was nearly impossible. The canal, built between 1825 and 1832, provided a successful transportation route from Cleveland, on Lake Erie, to Portsmouth, on the Ohio River. The canal opened up Ohio to the rest of the settled eastern United States.[7]

There are numerous wayside exhibits that provide information about canal features and sites of historic interest.[8] There is also a virtual tour.[7][9]

Today visitors can walk or ride along the same path that the mules used to tow the canal boats loaded with goods and passengers. The scene is different than it was then; the canal was full of water carrying a steady flow of boats amongst the constant conversations of "canawlers." Evidence of beavers can be seen in many places along the trail.[7] 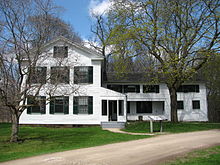 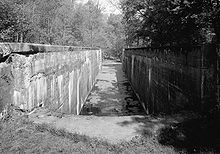 Many of the listed homes are in private ownership.[26]