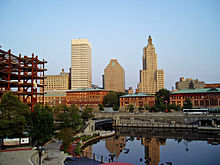 As a consequence of the city of Providence, Rhode Island's so-called "Renaissance" that started in the 1970s, free land and economic conditions became favorable to large projects in the late 1990s. Most of the new projects consist of hotel and condominium development in new and existing buildings, but two new office towers are underway as well. As a result, within 3 years Providence would have a new corporate headquarter, and four new buildings over 60 m (200 ft) in height.

While the city has welcomed opportunity for new investment with tax breaks and property deals (notably to Gtech), many local residents take exception to the new additions, worrying that the traditional historic look and older architectural styles of Providence will be spoiled by bland modern International-style edifices. Additional concerns have arisen over equitable tax policies for high income residences.

Blue Cross & Blue Shield of Rhode Island announced April 19, 2007, its intention to consolidate its operations comprising 1100 employees, which had been scattered throughout the city, into one 325,000 sq ft (30,200 m2) 12-story building.[1][2] The $114 million tower will be built on top of a parking garage currently under construction for Intercontinental's neighboring Waterplace condominiums. The project is being built by Dimeo Construction Co. of Providence, Rhode Island. As of April 20th, 2008, the foundation was completed and steel was rising.

A former parking lot adjacent to the state capitol and Amtrak station is being developed into mid-rise condominiums. The project had been delayed from its original schedule over worries of a slowing housing market. The first phase, comprising 96 units that will primarily be one-story two-bedroom flats, is now scheduled for completion by the end of 2008. The developer will wait until these are sold before committing to a second phase, which would include an additional 153 units. If the second phase is to be built, and if the units would be sold as condos or apartments have not yet[when?] been decided. As of April 20, 2008, the skeleton of the first phase was completed.[3]

Dunkin' Donuts Center was purchased by the Rhode Island Convention Center Authority, which planned to invest $62 million into its renovation. In addition to modernizing the appearance of the building, the project will add twenty luxury boxes as well as connect it to the neighboring Rhode Island Convention Center. The state wants to use the combined complex to facilitate larger meetings and conventions.[4] [5]

Main article: The Empire at Broadway

The Procaccianti Group is also in the preliminary stages of its planning for a 22-story office tower at the current disused fire/police station. Featuring a 522 space parking garage and 496,000 sq ft (46,100 m2) of retail space, the Empire at Broadway will stand as the tallest office tower in Providence.[6] As of December 13, 2006, the Procaccianti Group secured preliminary permission to demolish the existing building.[7] 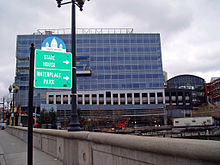 The Procaccianti Group has renovated the Holiday Inn and turned it into a Hilton as of January 29, 2007.

Carpionato Properties has been chosen to build a 17-story high-rise adjacent to Kennedy Plaza. The building will consist of an InterContinental Hotel, condominiums, and a retail center. It is expected to begin construction in late 2007.[9]

The Masonic Temple building, the construction of which had been abandoned amidst the Great Depression and has stood uncompleted for 75 years, has been completely gutted in the largest restoration project in Rhode Island history. Having opened in June 2007, it now hosts 274 guest rooms, a restaurant, and a lounge, and preserves the original historic 1929 facade.[10][11]

What had been planned as a 40-story 520-foot (160 m) "OneTen" (at right) (110 Westminster Street) containing condominiums and a W Hotel, and would have been the new tallest for Providence was cancelled due to a soft housing market, though a 22-story building is likely to fill the spot.[12][13][14]

Residences at the Westin

Main article: The Residences at the Westin

In the space next to the city's existing Westin Hotel is an additional 31-story tower that adds 200 rooms to the existing 364 rooms (making the Westin the largest hotel in Rhode Island with 564 guest rooms) as well as 103 new luxury condominiums.[15] 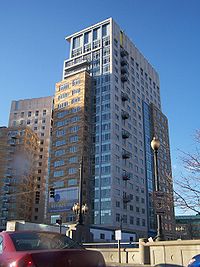 Intercontinental's Waterplace Condominiums (below) are finished, overlook Providence's Waterplace Park, and consist of 193 luxury condominiums in its 17 and 19-story buildings.[16]

The Jefferson condos, now known as the 903, behind Providence Place mall are completed addition to the Providence condominium market. The Foundry, the former plant of Brown and Sharpe, has also become a site for new lofts, created out of the historically preserved mill. Rising Sun Mills, a mixed use redevelopment of an historic mill, is the new home of Abaqus/Dassault, 50,000 sq ft (4,600 m2) of other office tenants and 135 loft aparatments, done by the Armory Revival Company of Providence and Struever Bros Eccles and Rouse of Baltimore. In addition, Struever, which has redeveloped another mill complex in nearby West Warwick, has launched two large mixed-use projects. The first is a $330 million development called ALCO along the Woonasquatucket River. This development reuses a number of historic industrial buildings associated with the American Locomotive Company and Nicholson File. The same firm is also developing the $135 million Dynamo House project on the Providence River, which involves rehabbing an early 20th-century power plant. 77 South Angell Condominium, 11 luxury residences in the Wayland Square neighborhood, on Providence's East Side next to downtown, is scheduled for completion in March, 2009.