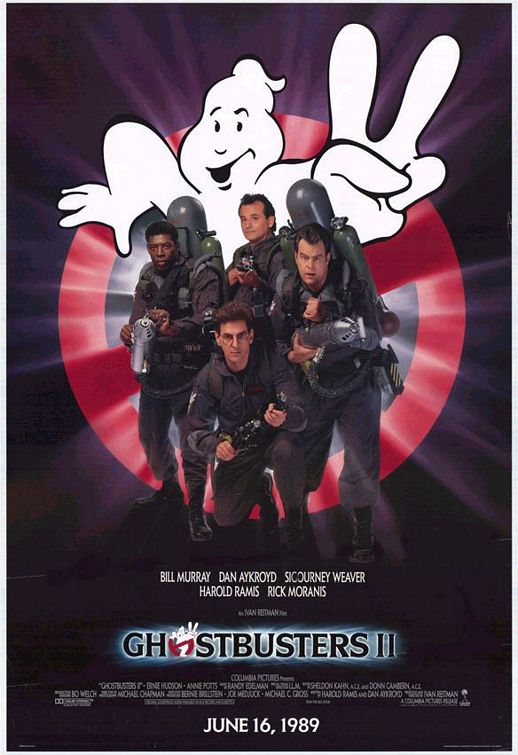 "Ghostbusters II" is the 1989 to "" (1984) produced and directed by . The sci-fi is about the further adventures of a group of parapsychologists and their organization which combats activities ("ghostbusting"). The sequel had what was, at the time, the biggest three-day opening weekend gross in history ($29,472,894, which is equal to $52,709,710 today), a record that was broken precisely one week later by "Batman" ($40,505,884) [ [http://www.boxofficemojo.com/alltime/weekends/pastrecords.htm All Time Box Office Records ] ] . Although the film was popular and was generally well received by fans, it received mixed reviews from critics.

Five years after the events of the first film, the Ghostbusters are out of business after being sued by the city for property damage. and have become entertainers at childrens' parties, works at a lab office building conducting various experiments, and hosts a "psychic" television show. Meanwhile, is a single mother working at an art museum restoring paintings and raising her infant son Oscar at a new apartment.

Ray, Egon, and Peter are involved investigating a seemingly supernatural incident in which Oscar's stroller rolled down a street by itself. Investigating this, they discover a river of pink slime beneath the street. The trio is arrested when Ray accidentally causes the electrical power in most of the city to terminate. Meanwhile, Dana's boss, Dr. Janosz Poha, while restoring a painting of a cruel medieval warlord named Vigo the Carpathian, is possessed by Vigo's spirit, which is located within the painting. In this state, Janosz is ordered to find a child so that Vigo may become corporeal again.

The Ghostbusters, "sans" Winston, are found guilty of fraudulently digging on 1st Avenue, whereupon the judge goes into an angry rant, which causes the slime - collected by Ray beneath the street - to react violently. Two ghosts - former criminals sentenced to death by the judge - attack the court room. The judge, in reaction to this, clears the charges against the trio, who capture the ghosts. With their popularity regained, Peter, Ray, Egon, and Winston resume their usual business. Studying the slime, they learn that it grows in size when exposed to negative emotions and gains kinetic abilities when exposed to positive emotions. Peter learns of the painting from Dana; he and the others examine it, despite Janosz's objections.

The Ghostbusters eventually discover that the slime is "concentrated evil" being energized by the hostile atmosphere of New York. They attempt to warn the mayor, but he fails to heed their warnings. Thinking the Ghostbusters will tarnish the mayor's chances of re-election, the mayor's aide commits the quartet to an insane asylum.

As Dana, , and Janine Melnitz babysit Oscar, a supernaturally powered Janosz kidnaps the baby and takes him to the museum. Dana pursues while Louis and Janine search for the Ghostbusters. Beneath the city, the slime causes massive mayhem as ghosts and monsters randomly appear to terrorize citizens. The desperate mayor, after learning of the situation, orders the Ghostbusters out of the asylum. Upon reaching the museum, they find it covered by slime impenetrable by their weapons. To gain entry, they animate the while playing 's cover version of the song "Your Love Keeps Lifting Me Higher". As the statue moves towards the museum, the people watching cheer in its favor, accumulating positive emotion that causes the slime surrounding the museum to weaken. The statue breaks through the roof, whereupon the Ghostbusters enter the museum, where Vigo attempts to inhabit Oscar's body. Dana quickly grabs Oscar before Vigo can possess him while Janosz is knocked unconscious by a spray of 'positive' slime. Vigo's spirit disables the Ghostbusters and Dana and once more tries to inhabit Oscar, but is prevented when the people outside the museum sing , accumulating more positive emotion that forces him to retreat into his portrait. As the Ghostbusters converge on him, Vigo desperately possesses Ray, but is destroyed by a spray of 'positive' slime and accelerated protons. As they celebrate their victory, the Ghostbusters, Dana, Oscar, and a restored Janosz see that the painting has changed to show a family scene of themselves.

After the success of the first film and the animated series, "", pressured the producers to make a sequel. However, Dan Aykroyd, Harold Ramis and were uncomfortable with this as the original film was intended to be conclusive and they wished to work on other projects. Eventually, they agreed and created a script. was also working on her TV series, "", at the same time. Reportedly, some of the cast and crew were ultimately dissatisfied with the film as well as its box office reception. Though there was initially talk of doing a third movie, it turns out that, instead, the video game, slated to be released in 2008, will basically be considered the third movie. In an interview with the video game magazine "", Aykroyd is quoted as saying that he tells people "If you have an appetite for the third movie, then the video game is it." ["Ghostbuster the Video Game: The 'Real' Ghostbusters." Game Informer. December 2007. Page 81]

The Scoleri Brothers are played (uncredited) by and in latex suits with masks. Ostensibly, Tony and Nunzio are based on the real-life Scoleri Brothers, who once robbed 's father Nate Ramis' store. "The ghosts themselves were very loosely based on the fact that my father was a storekeeper who was once robbed and assaulted by the Scoleri Brothers." Some however have suggested that they might be based instead on Tony and Eddie Scoleri, who were convicted of robbing and killing a store owner in in the 1960s. None of this is known for certain however. The designs were created by the Visual Development Artist Henry Mayo (Credited) after extensive input from the Producer Michael Gross.

*There are no opening titles. The movie's title is represented by an animation of the movie's logo, but the title is never displayed onscreen until the very end of the closing titles.

*At the end of the version shown in theaters, comes out from behind the Statue of Liberty and goes right into the camera (as he did at the end of "Ghostbusters" (1984)). The video version just ends with a pan up to the statue's head, then a fade to black. Also, in an unusual move, Slimer has his own cast billing in the credits: 'and Slimer'. Slimer was puppeted and controlled by whom much of her performance ended up on the cutting room floor.

*A great deal of merchandise (such as s) came out with the release of this film. As was the case with the "" cartoon, the makers of this material may have wanted to avoid likeness fees and as a result, the main characters in these bear little resemblance to any other version of the characters.

*Ernie Hudson had a special guest appearance (advertising "Ghostbusters II") in "", where he played a member of the "Slime Busters" who tries to stop a ghost who eventually possesses Luigi.

*Vigo's full name, found by Egon in a computer encyclopedia, was "Prince Vigo von Homburg Deutschendorf", a wordplay on the name of the actor who played Vigo and the surname of the twin babies.

*Assuming the first "Ghostbusters" movie took place in 1984, this movie takes place in Christmas 1989, due to the title card stating "FIVE YEARS LATER".

*Some notable cast members in the film include one of Bill Murray's siblings, , who played the psychiatric doctor, and , who played a public works official for the mayor. and also appear in the movie, as the dock supervisor who sees the "Titanic" come in, and the city police chief, respectively. also appears in this movie as the doorman to when the Ghostbusters go to see the mayor of New York City. In the scene he asks the Ghostbusters for a proton-pack for his kid brother to which Egon answers "A proton pack is not a toy".

*The second version of the PKE Meter was used as a prop for a 1990 promotional video for the starring the , where it was called the "Gloomsday Device."

*The mention of in the opening is amusingFact|date=September 2008, since the cartoon had gone off the air, and the live-action "Masters of the Universe" was considered a flop. But at the same time the "Ghostbusters" cartoon was still very popular.

During this period, "" comic book produced by ran a three-part adaptation of the film, using the cartoon character designs instead of the likenesses of the actors. The overall story received minor alterations to run as a three-parter, and includes several scenes that were in the shooting script but were not included in the released movie.

Most notableFact|date=January 2008 is a scene set after their first visit at the museum (and Ray's first encounter with Vigo). In this scene, Ray is momentarily possessed while driving the Ecto-1A, and as a result tries to crash the car and kill the Ghostbusters. They soon bring Ray around to his senses after speeding through New York streets, and he apologises, unable to account for his actions. They never connect it to Vigo since, while possessed, Ray never mentions him. The comic panels further reinforce the movie's scene where Ray is briefly hypnotised by Vigo (leading to him being chosen as a host at the end).

As can be seen in almost all the advance merchandising for the film, the slime featured in this adaptation is depicted bright green as opposed to pink as seen in the movie - perhaps due to the popularity of .

In a novelization of the movie by , Hardemeyer rushes at the museum's slime shell, which sucks him in and engulfs him; the book does not mention him again. (In the end credits of the film, he is shown in the crowd outside the museum, singing along with the rest of them).

* Years Later
* Hi Peter
* Named After a Hot Dog Brand
* Vigo's Plan
* She's Twitching
* We're Back
* The Painting
* Refuge to Peter
* Oscar, Dana & Peter- The Museum
* Tuck in the Guts, We're The Ghostbusters
* Dates and Sewers
* Take off Your Clothes
* No Reservations
* Trip to the Asylum- Bring Me A Child
* Oscar's Walk on the Ledge
* The Museum
* Total Madness
* Big Ball-o-Yellow- The Symbol
* The Girl Can Walk
* A Fifth Ghostbuster
* The Boy's Are Back
* Put Oscar Somewhere Safe
* Vigo
* Resolution- End Titles

The soundtrack album of the film also contains several songs that do not appear in the film itself (although, ironically, it does not feature the original Ray Parker Jr. version of "Ghostbusters", even though it appears in the film.