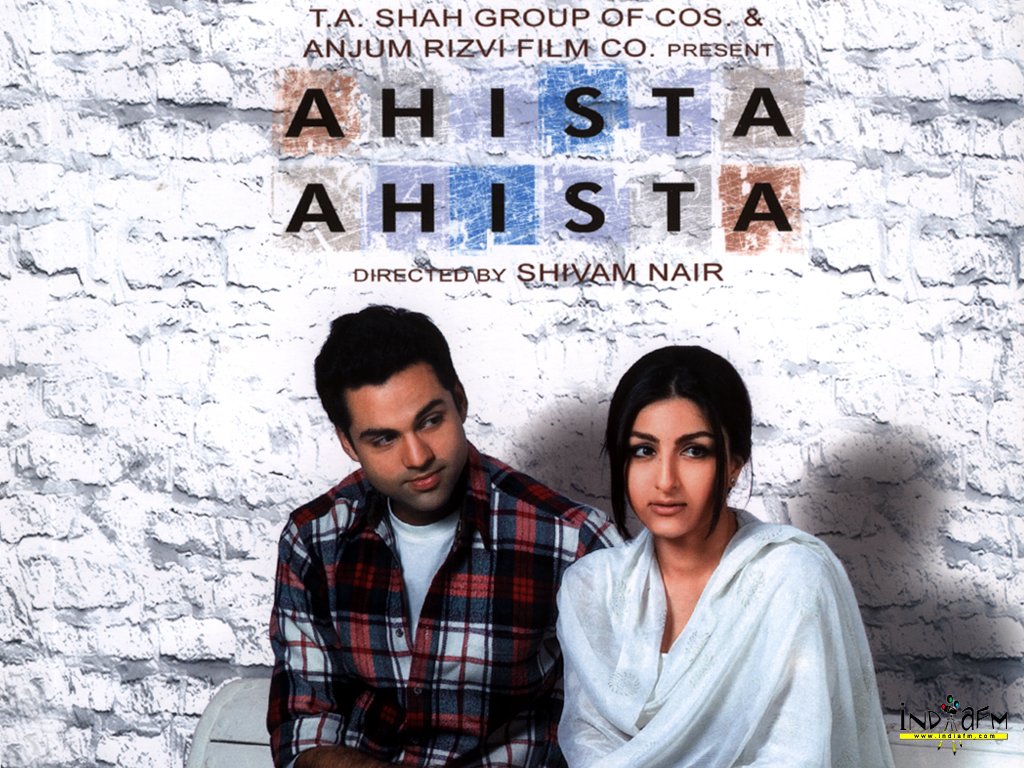 "Ahista Ahista" (: आहिस्ता आहिस्ता, : آہستہ آہستہ, : Slowly Slowly) is a film starring , and . It was released in August, 2006. This film marks the directorial debut of Director with a story much closer to the 's short story, White Nights.

The story is woven around aimless youth Ankush who scrapes a living by acting as a witness in 's marriage registrar bureau and a girl Megha who has run away from her home in , to get married to her love Dheeraj.

Fate intervenes and Dheeraj does not show up in the Marriage Registrar's Office. Dejected Megha is forced to rely on Ankush's generosity. Ankush helps Megha by getting her a job at a local old age home so that she has the security of a roof over her head. As time passes Megha begins to realize her potential as an educated girl who had earlier dedicated her life to her boyfriend and that relationship, thinking that there was nothing more to her. She realizes that she was wrong, and finally there comes a when she tells Ankush that she is glad Dheeraj stood her up at the Marriage Bureau. Else, she would have never known who she really was.

At the same time Ankush realizes that the meagre amount he earns each day is not enough for him. He still has to repay the loan he had taken for Meghas sake. So he starts working as the Banks representative who opens Bank accounts for a commission. Slowly he starts increasing the number of hours working at his new job and reduces those spent at the Marriage Registrar's Office.

A day comes when he is able to repay the loan he had taken for Megha. On learning of this Megha reprimands him for doing so much for a girl who was a stranger for him. But now Ankush is earning 5 times more than he was before. He has a much more respectable job and a future. Ankush believes he has changed because of Megha and her faith in him. Life progresses well for Ankush. Soon he gets an offer to join the same bank as an Assistant Manager, at a fantastic salary. Ankush hestitates, as fluent English is a pre-requisite.

Megha inspires Ankush giving him the confidence to realize that all he needed was an opportunity in life to succeed. A relationship develops between Megha and Ankush. Megha decides to leave her past with Dheeraj behind and embrace the future with Ankush by her side.

Everything seems to be falling in place for Ankush when Dheeraj returns. He is persistent in his search for Megha and Ankush's new found happiness crumbles.

Ankush tries to force Dheeraj return to Nainital. He tries all his wits and energy to do this, but does not succeed. He even shows Dheeraj the death certificate of Megha, so that he can return, but Dheeraj has complete faith in his love and Megha.

One day Ankush's friend shows Dheeraj about the whereabouts of Megha. This is on the same day when Megha and Ankush have planned to get married. On seeing Dheeraj in the mirror, she gets angry at him and asks him to leave. Dheeraj agrees, but he also insts to listen to what had happened to him when he was coming to Delhi from Nainital. He was preyed in a plot of in the train. He somehow escapes from the plot. Megha realizes that what Dheeraj did was not intentional and was just a situation in which Dheeraj was trapped.

Megha talks to Ankush and tells him that she can not live without Dheeraj and finally Ankush realizes that he is just a friend to her. In the end Ankush becomes the witness of the wedding of Dheeraj and Megha but asks for his regular fees, severing all connection to Megha and Dheeraj love story.