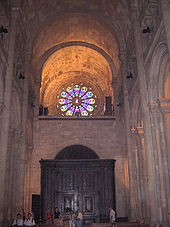 Nave of Lisbon Cathedral with a barrel vaulted soffit. Note the absence of clerestory windows, all of the light being provided by the Rose window at one end of the vault. 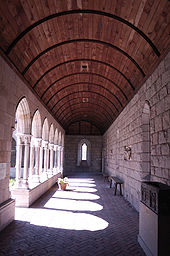 A barrel vault, also known as a tunnel vault or a wagon vault, is an architectural element formed by the extrusion of a single curve (or pair of curves, in the case of a pointed barrel vault) along a given distance. The curves are typically circular in shape, lending a semi-cylindrical appearance to the total design. The barrel vault is the simplest form of a vault: effectively a series of arches placed side by side, i.e., one after another. It is a form of barrel roof.

As with all arch-based constructions, there is an outward thrust generated against the walls underneath a barrel vault. There are several mechanisms for absorbing this thrust. One is, of course, to make the walls exceedingly thick and strong - this is a primitive and sometimes unacceptable method. A more elegant method is to build two or more vaults parallel to each other; the forces of their outward thrusts will thus negate each other. This method was most often used in construction of churches, where several vaulted naves ran parallel down the length of the building. However, the outer walls of the outermost vault would still have to be quite strong or reinforced by buttressing. The third and most elegant mechanism to resist the lateral thrust was to create an intersection of two barrel vaults at right angles, thus forming a groin vault.

Barrel vaults are known from Ancient Egypt, and were used extensively in Roman architecture. They were also used to replace the Cloaca Maxima with a system of underground sewers. Early barrel vault designs occur in northern Europe, Turkey, Morocco and other regions. In medieval Europe the barrel vault was an important element of stone construction in monasteries, castles, tower houses and other structures. This form of design is observed in cellars, crypts, long hallways, cloisters and even great halls. 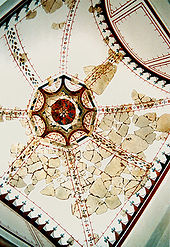 Barrel vaulting was known and employed by early civilizations, including Ancient Egypt and Mesopotamia, but apparently it was not a very popular or very common method of construction. The technique probably evolved out of necessity to roof buildings with masonry elements such as bricks or stone blocks in areas where timber and wood were scarce. The earliest known example of a vault is a Tunnel vault found under the Sumerian ziggurat at Nippur in Babylonia, ascribed to about 4000 BC, which was built of burnt bricks amalgamated with clay mortar. The earliest tunnel vaults in Egypt are found at Requagnah and Denderah, c. 3500 BC; these were built in sun-dried brick in three rings over passages descending to tombs: in these cases, as the span of the vault was only two meters. In these early instances, the barrel vault was chiefly used for underground structures such as drains and sewers, though several buildings of the great Late Egyptian mortuary palace-temple of Ramesseum were also vaulted in this way.[1] Recent archaeological evidence discovered at the Morgantina site (in the province of Enna) shows that the aboveground barrel vault was known and used in Hellenistic Sicily in 3rd century BC, indicating that the technique was also known to Ancient Greeks.

Ancient Romans most probably inherited their knowledge of barrel vaulting from Etruscans. Romans were the first to use this building method extensively on large-scale projects, and were probably the first to use scaffolding to aid them in construction of vaults spanning over widths greater than anything seen before. However, Roman builders gradually began to prefer the use of groin vault; though more complex to erect, this type of vault did not require heavy, thick walls for support (see bellow), and thus allowed for more spacious buildings with greater openings and much more light inside, such as thermae.

After the fall of the Roman empire, few buildings large enough to require much in the way of vaulting were built for several centuries. In the early Romanesque period, a return to stone barrel vaults was seen for the first great cathedrals; their interiors were fairly dark, due to thick, heavy walls needed to support the vault. One of the largest and most famous churches enclosed from above by a vast barrel vault was the church of Cluny Abbey, built between the 11th and 12th centuries.

In 13th and 14th century, with the advance of the new Gothic style, barrel vaulting became almost extinct in constructions of great Gothic cathedrals; groin vaults reinforced by stone ribs were mostly used in the beginning, and later on various types of spectacular, ornate and complex medieval vaults were developed. However, with the coming of the Renaissance and the Baroque style, and revived interest in art and architecture of antiquity, barrel vaulting was re-introduced on a truly grandiose scale, and employed in the construction of many famous buildings and churches, such as Basilica di Sant'Andrea di Mantova by Leone Battista Alberti, San Giorgio Maggiore by Andrea Palladio, and perhaps most glorious of all, St. Peter's Basilica in Rome, where a huge barrel vault spans the 27 meter wide nave.[2] 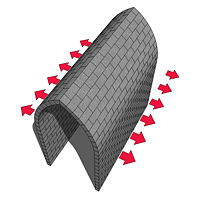 With a barrel vault design the vectors of pressure result in a downward force on the crown while the lower portions of the arches realise a lateral force pushing outwards.[3] As an outcome this form of design is subject to failure unless the sides are anchored or buttressed to very heavy building elements or substantial earthwork sidings. For example, at Muchalls Castle in Scotland adjacent walls to the barrel vaulted chambers are up to 4,6 meters (15 feet) thick, adding the buttressing strength needed to secure the curved design. Well documented cases exist of the long term stress effects on inadequately laterally supported barrel vaults such as the 17th century church of Guimarei.[4]

The inherent difficulty of adequately lighting barrel vaulted structures has been widely acknowledged.[5] The intrinsic engineering issue is the need to avoid fenestration punctures in stonework barrel vaults. Such openings could compromise the integrity of the entire arch system. Thus the Romanesque medieval builders had to resort to techniques of small windows, large buttresses, or other forms of interior wall cross-bracing to achieve the desired lighting outcomes. In many of the monasteries a natural solution was cloisters which could have high barrel-vaulted construction with an open courtyard to allow ample lighting.

In terms of comparison to other vaulting techniques the barrel vault is inherently a weaker design compared to the more complex groin vault. The barrel vault structure must rest on long walls creating less stable lateral stress, whereas the groin vault design can direct stresses almost purely vertically on the apexes.[7]

There are numerous contemporary examples of barrel vault design in Victorian and modern architecture, including:

In the field of bone surgery the technique of a "barrel vault" shaped incision is not only a well-defined state-of-the-art surgical procedure, but the name barrel vault is given to this technique by orthopedic surgeons.[10] The Wohlfahrt study cited documents results of this surgical procedure on the human tibia in 91 such operations.