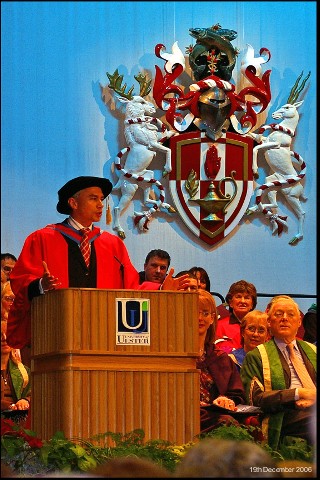 Jonathan David Edwards, CBE, (born , in ) is a former British er and widely regarded as the finest triple jumper of all time. He is a former Olympic, Commonwealth, European and World champion, and has held the in the event since 1995.

Edwards attended [ [http://www.isbi.com/isbi-viewschool/62-West_Buckland_School.html A Word from the Head] isbi.com] where his potential for the triple jump was spotted at an early age. He was a strong all-rounder and on leaving received the school's top award for sporting and academic excellence, the Fortescue Medal. Contemporaries with Edwards at West Buckland School included and Steve Ojomoh, both former Bath and England Rugby international players. Edwards now has a Sports Hall at West Buckland named after him- 'The Jonathan Edwards Sports Center'. Edwards then read Physics at , attending .

Because of his strong Christian beliefs during his athletic career, discussed in more detail below, he initially refused to compete on Sundays [ [http://www.independent.co.uk/sport/olympics/news-and-features/an-email-conversation-with-jonathan-edwards-884268.html An email conversation with Jonathan Edwards] independent.co.uk] , but eventually decided to do so in 1993. This decision proved timely, since the qualifying round at that year's World Championships took place on a Sunday. He went on to win the .

In his breakthrough year of 1995, he produced an astonishing jump of 18.43 m (60 feet 5½ inches) at the European Cup. The leap was wind assisted and did not count for record purposes but it was a sign of things to come as he capped an unbeaten year with a historic performance at the World Championships in which he broke the world record twice in the same meet. On his first jump, he became the first man to legally pass the 18-metre barrier (18.16 m/59 feet 7 inches). That record lasted for about 20 minutes. His second jump of 18.29 m made him the first to jump 60 feet. During his commentary for the , Edwards observed that during the 1995 World Championships, he felt as if 'he could jump as far as he needed to'. Later the same year Edwards became the .

During 1996 Edwards went into the Olympic games as favourite and world record holder, but it was American who took the gold with a jump of 18.09 m. Edwards walked away with the silver after a leap of 17.88 m (the longest ever jump not to win gold), but somewho have speculated that one of the jumps he fouled on could have been the longest ever recorded, or at least won him the gold. Edwards won the gold medal at the 2000 , and was awarded the CBE shortly afterwards. He also won golds at the 2001 World Championships and 2002 . At one point in 2002, Edwards held all the gold medals for the "four majors" (Olympic Games, World Championships, Commonwealth Games & European Championships). He retired after the 2003 World Championships as 's most successful medal winning athlete.

Following his retirement, Edwards pursued a media career as a mainly working for the as a sports commentator and on programmes such as "" until he gave up this programme, due to his loss of faith, in February 2007.

He is a member of the , representing athletes in the organisation of the . [ [http://www.london2012.com/news/media-releases/post-bid-2005/jonathan-edwards-appointed-to-the-new-london-2012-board.php Jonathan Edwards appointed to the new London 2012 board] london2012.com]

An honorary doctorate was conferred upon him at a ceremony at the on 21 January, 2006. [ [http://www.admin.exeter.ac.uk/calendar/live/misc/hongrads.htm Honorary Graduates Of The University - Doctor of Laws (LLD)] exeter.ac.uk]

Later in the same year, an honorary doctorate of the university (DUniv) was conferred upon him at the winter graduation ceremony of the (19th December, 2006). [ [http://news.ulster.ac.uk/releases/2006/2902.html UU Honours Olympian Jonathan Edwards] ulster.ac.uk]

Edwards lives with his Alison in , , and also has two sons, Nathan and Sam.

He initially refused to compete on Sundays due to his devout Christian beliefs, a decision which cost him a chance to compete in the 1991 World Championships. However in 1993, after much deliberation and discussion with his father (a ), he changed his mind, deciding that gave him his talent in order for him to compete in athletics.

On 2 February 2007 it was widely reported that Edwards had lost his faith in God despite him once saying "My relationship with Jesus and God is fundamental to everything I do. I have made a commitment and dedication in that relationship to serve God in every area of my life."

The "" described Edwards as a "man deeply troubled by the collapse of his Christian faith" but revealed that a friend said " [Edwards] has a deep, theological comprehension of the Bible, making his spiritual meltdown even more unlikely ... They still go to church as a family"

Edwards presented episodes of the Christian praise show until 2007.