The Purple Sunbird (Cinnyris asiaticus) is a small sunbird. Like other sunbirds they feed mainly on nectar, although they will also take insects, especially when feeding young. They have a fast and direct flight and can take nectar by hovering like a hummingbird but often perch at the base of flowers. The males appear all black except in some lighting when the purple iridescence becomes visible. Females are olive above and yellowish below. 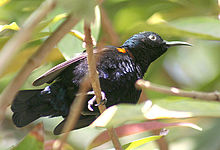 This small sunbird has a relatively short bill, a dark and short square ended tail with distinctive sexual dimorphism. Less than 10 cm long they have a down-curve bill with brush-tipped tubular tongues that aid in nectar feeding. The male is glossy metallic purplish black on the upper parts with the wings appearing dark brown. The breeding male has the underparts also of the same purplish black, but non-breeding males may show a central streak of black on yellow underparts. (Birds in this eclipse plumage were once designated as a species currucaria.[2]) In the breeding plumage, the male can be confused with the syntopic Loten's Sunbird which has a long bill and distinctive broad maroon band on the breast. Breeding males will sometimes show their yellow pectoral tufts in displays. There is a patch of bright blue on the shoulder of breeding males.[3] The maroon shine on the feathers of the collar around the neck is visible mainly during the breeding seasons.[4][5][6][7][8]

Females are olive brown above with yellowish underside. There is a pale supercilium beyond the eye. There is a darkish eye stripe. The throat and breast are yellow becoming pale towards the vent. The outer tail feathers are tipped in white both in the male and female.[3]

They are seen in pairs or small groups and aggregations may be found in gardens with suitable flowers. They feed mainly on nectar but also take fruits and insects. Groups of as many as 40 to 50 individuals have sometimes been noted.[9] 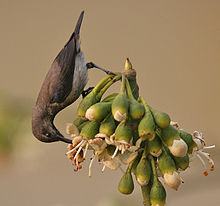 The species is distributed widely from the Persian Gulf through South Asia and into Southeast Asia. They are resident birds in most parts of their range and do not move large distances. They are found mainly on the plains but going up to 2400 m in southern India and up to 1700 m in the Himalayas. They are found in thin forest and garden land, including those in dense urban areas.[3] Local movements are however noted especially in the drier parts of northwestern India and Pakistan where they are said to arrive in large numbers before summer.[10]

The nominate subspecies is distributed in India east of the desert region and south of the Himalayas extending to the west and south of India and Sri Lanka. The race brevirostris is designated for the populations in the dry zone of the west from the Arabian Peninsula into Iran, Afghanistan, Pakistan until the dry zone of Rajasthan and Gujarat. These may however winter south near Goa.[11] This form has a slight tinge of green in the pectoral yellow tufts.[4] The race intermedius extends from the border of Orissa and Andhra Pradesh[12] northwards into Bangladesh, Myanmar and Indochina.

These movements of these birds are not well understood. A male ringed in Bharatpur was recovered in Dehra Dun, 350 km north.[9] 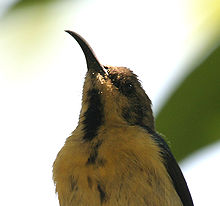 A male of intermedius in eclipse plumage (Kolkata, India)

These birds are very vociferous and will call and will join to mob owls or other predators. The song is rapid rattle followed by ringing, metallic notes. Other call notes include a "chwit" or "chwing!" notes. The primary breeding season is before the Monsoons, April to June in northern India and January to June in Sri Lanka.[3] While feeding they flick their wings.[2] They rarely hover at flowers and usually perch to forage for nectar. They are important pollinators of some plant species such as Butea monosperma,[13] Acacia,[14] Woodfordia[15][16] and Dendrophthoe.[17] but they sometimes steal nectar by slitting flowers such as Hamelia patens at the base.[18] They are known to feed on small berries such as those of Salvadora persica.[19] They have also been known to feed on cultivated grapes.[20] Insects are sometimes caught by flycatching.[21]

In courtship displays the male raises its head, fans its tail and flutters with partly open wings that expose the pectoral tufts and sings before the female.[9] The nest is a pouch made of cobwebs, thin strips of vegetation, lichens and bark. The entrance hole on the side is often shaded by a overhanging projection. The nest is built almost entirely by the female. The nest material is not woven and most of it is held together by cobwebs. About five to ten days may be taken in the building of the nest. The inner cavity is expanded by the bird by openings its wing and turning around on the inside.[22] In Sri Lanka and in southern India, it has been noted to nest by making use of the webbing made by colonial spiders, Stegodyphus sarasinorum (Eresidae).[23][24] Two eggs are usually laid.[2][9] The nest is usually suspended from a low branch, often of thorny plants[25] but are sometimes build close to human habitations, attached to wires or other man-made objects[26][27] and even indoors in an unused toilet.[28][29][30] Only the female incubates the eggs which hatch after 15 to 17 days. Males assist in feeding the chicks[31] although females involve themselves to a greater extent, making more trips as the chicks get older.[32]

Sunbirds have been known to live for nearly 22 years in captivity.[33]