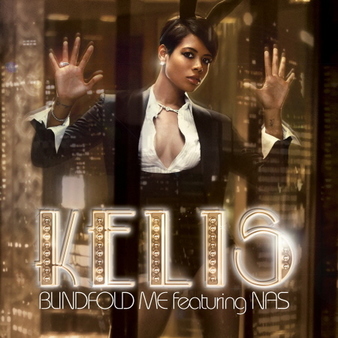 "Blindfold Me" is the second single from ' fourth studio album, "" (2006). The single features her husband and was released in October 2006 (see ). The song is about ed sex. Kelis talks about how her lover experiements with her body, unaware of what to do. Nas raps about the male experience and dominance of the act.

The track was produced by (well-known for producing hits for the and Fergie). The Nas-featured version of the song was chosen for the single version, and only appears on international pressings of "Kelis Was Here" while the n edition has the original no-rap version.

"Blindfold Me" was not released as a physical single in the U.S., due to unknown reasons (possibly because of the song's racy nature), and was instead sent to radio stations as a . After Jive decided not to release the single, Virgin, her an label, decided to release the Cee-Lo-produced and -featured "". The song was expected to be released as the lead single from her best-of album "The Hits" in the , due to the fact it had not been previously issued as a single there. However, this did not happen and "Blindfold Me" was not included on the album, thus "Blindfold Me" remains her only single not to be released there.

"Blindfold Me" received considerably heavy airplay on European radio stations, mostly in (where it landed at number eight on the Italian Top 20 Summer) and (number four on the Albanian Top 50 Radio Hip-Hop). The song also charted at number one on the n Radio Metro chart on January 1, staying on the countdown for three months.

The sexually-charged video for "Blindfold Me", shot in September 2006 in Los Angeles, , and directed by —who had previously worked with Kelis on "Bossy" earlier that year—, premiered on BET's "" on September 6, 2006. It takes place at night, and it opens with Kelis in a dim parking lot trying to find her car, when a men wearing a black hooded overcoat suddenly comes up and covers her eyes as she says "blindfold me". Kelis is then blindfolded and tied to a chair, relating to the song's theme of . The video also depicts Kelis on a in red , in an icy atmosphere where her breath can be seen, in a -type atmosphere wearing a Leopard-patterned outfit, and lying down on black holding a . Later on, the man is revealed to be Nas, who unties Kelis from the chair and proceeds to perform his rap segment while she dances suggestively next to him, still blindfolded. At the ending, Nas walks Kelis back to the same parking lot she was in the beginning and then disappears. She takes her blindfold off and then walks away.