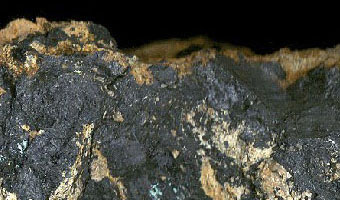 Psilomelane, also known as black hematite, is a group name for hard black s such as hollandite and . Psilomelane consists of hydrous oxide with variable amounts of and .

Generalized formula may be represented as Ba(Mn2+)(Mn4+)8O16(OH)4 or as (Ba,H2O)2Mn5O10. It is sometimes considered to be a hydrous manganese manganate, but of doubtful composition. The amount of manganese present corresponds to 70-80% of manganous oxide with 10-15% of available .

Psilomelane is amorphous and occurs as botryoidal and stalactitic masses with a smooth shining surface and submetallic lustre. The is readily distinguished from other hydrous manganese oxides (manganite and wad) by its greater hardness 5 to 6; the varies from 3.7 to 4.7. The streak is brownish black and the fracture smooth. Owing to its nature, the mineral often contains admixed impurities, such as s. It is soluble in with evolution of gas.

The name has reference to this characteristic appearance, from the Greek for (naked, smooth) and (black); a ized form is calvonigrite, and a German name with the same meaning is Schwarzer Glaskopf. It is a common and important of manganese, occurring under the same conditions and having the same commercial applications as . It is found at many localities; amongst those which have yielded typical botryoidal specimens may be mentioned the Restormel iron mine at in , in , in , Sayn near , and Crimora in Augusta county, Virginia. With pyrolusite it is extensively mined in , , , and .

Psilomelane is also cut, shaped, and polished for a variety of jewelry applications.