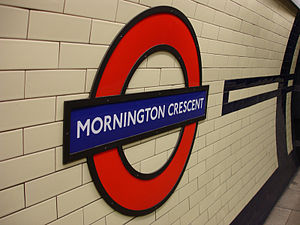 An enamel sign at the Mornington Crescent station, the game's namesake

The game consists of each panellist in turn announcing a landmark or street, most often a tube station on the London Underground system. The apparent[1] aim is to be the first to announce "Mornington Crescent", a station on the Northern Line. Interspersed with the turns is humorous discussion amongst the panellists and host regarding the rules and legality of each move, as well as the strategy the panellists are using. Despite appearances, however, there are no rules to the game,[2] and both the naming of stations and the specification of "rules" are based on stream-of-consciousness association and improvisation.[3] Thus the game is intentionally incomprehensible.[4]

Mornington Crescent first appeared in the opening episode of the sixth series of I'm Sorry I Haven't a Clue, broadcast on 22 August 1978. Although five episodes transmitted in 1974–1975 are still lost, Mornington Crescent seems to have made no appearance before 1978. It was played in every surviving episode of the sixth series.

The origins of the game are not clear. One claim is that it was invented by Geoffrey Perkins,[5] who stated in an interview that Mornington Crescent was created as a non-game.[6] According to chairman Humphrey Lyttelton, the game was invented to vex the series producer, who was unpopular with the panellists. One day, the team members were drinking, when they heard him coming. "Quick," said one, "Let's invent a game with rules he'll never understand."[7]

Barry Cryer, on Radio 4's Today programme, stated that Geoffrey Perkins had not invented the game, and that it had been around since the sixties. In The Guardian dated 6 September 2008, Bunny May, a contributor to the letters page, claims that he (along with John Junkin and David Clime) invented the game in 1970, in an actors' club off Shaftesbury Avenue called "Gerry's" (which was run at the time by Gerald Campion), in order to infuriate and bemuse patrons whom they found boring or boorish.

However, a "game" called "Finchley Central" was described in the Spring 1969 issue of the mathematical magazine manifold, edited by Ian Stewart and John Jaworski at the University of Warwick. Douglas Hofstadter referred to the article in his book Metamagical Themas. The game is referred to as an "English game" in an article on "non-games" as follows:

"Gameplay" on I'm Sorry I Haven't a Clue

The objective was to give the appearance of a game of skill and strategy, with complex and long-winded rules and strategies, in parody of certain games and sports in which similarly circuitous systems have evolved. In general, Humphrey Lyttelton would describe special rules to apply to that session, such as "Trumpington's Variations" or "Tudor Court Rules", so that almost every episode featuring Mornington Crescent introduced a variant.

There have been many supposed variations. In one of them, supposedly first introduced in North Yorkshire, a player whose movement is blocked is considered to be "in Nidd" (named after a Yorkshire river) and is forced to remain in place for the next three moves. This tends to block the other players, putting them into Nidd as well and causing a roadblock. In one episode of I'm Sorry, I Haven't a Clue, every player ended up in Nidd and the supposed rule had to be suspended so that the round could continue.

Over time, the destinations named by the panellists expanded beyond the Underground. ISIHAC was recorded around the United Kingdom, and the game was occasionally modified accordingly. There were versions in Slough and Leeds, as well as one in Scotland, played during the Edinburgh Fringe arts festival (where the name was changed to "Morningside Crescent").[9] In one episode, recorded in Luton, panellists named locations as far afield as the Place de l'Étoile in Paris, Nevsky Prospekt in St. Petersburg, and Pennsylvania Avenue in Washington, DC. However, a move to Luton High Street was ruled invalid for being too remote. In other episodes, an attempt was supposedly made to expand the territory to Manhattan (via Heathrow and JFK) but there was some disagreement as to whether or not the New York subway system was suited to the game. References have been made in various episodes of ISIHAC to international versions of the game, including "Mornington Croissant", supposedly based on the Paris Metro, and "Mornington Peninsula", the Australian variant. At least one full game of Mornington Croissant was played on air.

Lyttelton joked that the game predated the London Underground. "Tudor Court Rules" were described as "A version of the game formerly adopted by Henry VIII and played by Shakespeare. At this time, the underground was far smaller than at present, and so the playing area also was more restricted, primarily due to plague."

Those who asked for the rules were told "NF Stovold’s Mornington Crescent: Rules and Origins" was out of print. They were also advised that "your local bookshop might have a copy of The Little Book of Mornington Crescent by Tim, Graeme, Barry and Humph."

Finchley Central and Mornington Crescent became popular in the UK as a play-by-mail pastime, and in the 1980s were "played" by post in a number of play-by-mail magazines.

Mornington Crescent is now played widely online, in the spirit of the radio series. Games are played by fans on Usenet, in diverse web forums,[10][11][12] and on the London Underground itself. Wikipedia has its own version, Wikipedia:Wikington Crescent, and a Facebook application has also been produced.[13]

Mornington Crescent occasionally appears on Internet message forums, since the nature of these forums seems to work well with the gameplay. Many on-line matches were started to commemorate Humphrey Lyttelton, who died in 2008.[14]

During the early 1980s, Radio 4 broadcast a special programme, Everyman's Guide to Mornington Crescent, a "two-part documentary" on the history of the game and its rules, presented by Raymond Baxter. At the end of Part One (concentrating on the history), it was announced that Part Two (about the rules) had been postponed due to "scheduling difficulties".

Another documentary was broadcast on Christmas Eve 2005. It was named In Search of Mornington Crescent, and narrated by Andrew Marr.[15] This has since also been released on a BBC Audiobook CD.