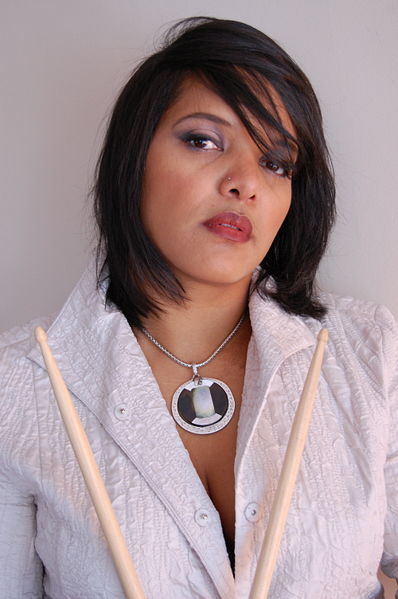 Terri Lyne Carrington (born 1965 in ) is a musician, composer, producer and clinician. Recently, she was appointed professor at her alma mater, , which is also where she received an honorary doctorate in 2003.

Ms. Carrington has maintained her status in the industry as a person to watch. She has spent the better part of the last two and a half decades backing many legendary artists, including legends , , , , , , , and many more.

At 7, Ms. Carrington was given her first set of drums, which had belonged to her grandfather, , who had played with and Chu Berry. After studying privately for three years, she played her first major performance at the with . At age 11 she received a full scholarship to . At 12 years old she was profiled on the PBS kids' biography program .

At Berklee College of Music she played with leading musicians such as , , and others. She also studied under master drum instructor Alan Dawson and made a private recording entitled, TLC and Friends, with , , George Coleman and her father, Sonny Carrington, before turning 17.

Throughout high school she traveled across the country doing clinics at various schools and colleges.

In the late 80's she relocated to Los Angeles, where she gained recognition on late night TV as the house drummer for the "", then again in the late 90's as the drummer on the late night TV show, "", hosted by Sinbad.

Terri Lyne has played on many recordings throughout the 90's thru today. Notable examples of her stellar work include Herbie Hancock's Grammy winning CD "Gershwin's World" where she played alongside Joni Mitchell and Stevie Wonder. She has toured with each of Mr. Hancock's musical configurations (from electric to acoustic) over the last 10 years and is featured on his "Future2Future" DVD.

In addition to touring the globe with Mr. Hancock, Wayne Shorter (one of her mentors), as well as Joe Sample, Al Jarreau, David Sanborn and others, she also has extensively toured in Europe as a bandleader performing her own music. She has also performed often as a leader in the U.S., including her appearance in May 2007 at one of the largest free jazz festivals in the states, the Atlanta Jazz Festival.

In recent years, Ms. Carrington has concentrated her efforts on writing and producing her own work, as well as collaborating with leading artists.

Other solo CDs include 2002’s "Jazz is a Spirit", which features Herbie Hancock, Gary Thomas, Wallace Roney, Terence Blanchard, Kevin Eubanks, and Bob Hurst, and 2004's "Structure", a cooperative group which features Adam Rogers, Jimmy Haslip and Greg Osby. Both CDs were released on the Europe-based ACT Music label, and enjoyed considerable media attention and critical acclaim in the European and Japanese markets.

Her production collaborations with artists such as Gino Vannelli, Peabo Bryson, Dianne Reeves, Siedah Garrett, Marilyn Scott have produced notable works as well, including a special song commissioned by the Atlanta Committee for the 1996 Olympic Games, "Always Reach for Your Dreams," (featuring Peabo Bryson), and her production of the Dianne Reeves Grammy-nominated CD, “That Day," which hovered at the top of the music charts for many months.

After a hiatus from the U.S. recording scene as a solo recording artist, in February 2009 Ms. Carrington will be returning with "More To Say ... (Real Life Story: NextGen)".

The new CD features some of the leading musicians of the era, and already is being touted as a vibrant album that encompasses a broad range of musical styles, including fusion, funk, silky smooth R&B, Latin, African percussion, and straight-down-the-middle classic jazz. Most of the 15 tracks on the CD are written or co-written by Ms. Carrington, who says: “"I wanted to create a sophisticated listening experience that cuts across musical categories. I¹m following up on the first CD, with more liberty to try some new music with one consistent quality: that the music feels good, that you can tap your foot to it, that it¹s danceable. It¹s a groove record."

While many recordings in recent years have featured noteworthy side personnel handpicked by a record label to boost a CD¹s profile, on More to Say, Carrington performs with friends and colleagues with whom she has been working with in her 20-year-plus career. Joining Carrington for the meticulously produced More to Say is an impressive all-star cast of jazz and contemporary jazz instrumentalists, including , (who also serves as co-producer), , , , , , , (who appeared on Real Life Story), , and .

In addition, Carrington enlists esteemed vocalist Nancy Wilson on the song: “Imagine This.” Ms. Carrington calls their collaboration a ‘dream come true’ session, saying: "“If someone had said to me that Nancy Wilson would sing a lyric I wrote on my next CD, I probably wouldn¹t have believed them. Eddie del Barrio and I started working on this song a few years back and were waiting for the right situation for it to come alive. Ms. Nancy Wilson definitely brought life to this song. She’s one of the few great jazz singers left. I love and respect her artistry.”"

Carrington says she wanted to bring all parts of her musical personality to the CD. “"The jazz legacy is so important to me, but I¹m also in the groove tradition, where R&B, funk and hip-hop are important as well,”" she says. "Back when I did my first album, bringing all that together wasn¹t very common. Today, it is more so. As a drummer, I can walk that line.”"

Carrington also recalls working on a project with guitarist , where he commented to her, "“You do so many things, so many styles, that you should put all that into one album.”" Carrington says, "That¹s what I¹m doing here. I wanted to incorporate all of who I am. When I recorded Real Life Story, I was 23 and we had one week to finish the project. For this CD, I spent a lot more time. In fact, I spent more time editing and getting it right than in the recording sessions themselves.”"

Carrington sums up More to Say in the liner notes:

"“This is an honest and current depiction of the NextGen TLC that's grown and sexy, and ready to explore all the possibilities of the new communications and technology frontier, as this is what can level the playing field globally, bringing the world closer together.”"

Caecilie Norby “My Corner of the Sky”

Diana Krall "The Girl In The Other Room"

Dianne Reeves “Quiet After The Storm”

Gary Thomas “Till We Have Faces”

Patrice Rushen “Anything But Ordinary”

Rachel Z “Room Of One's Own”