Cheltenham is a suburb in Melbourne, Victoria, Australia, located 19 km south-east of Melbourne's central business district.[2] Its Local Government Area is the City of Kingston to the eastern side of the area's metropolitan railway line and Charman Road north, while the City of Bayside resides over the suburb's western region towards extensive golf links, parks and Port Phillip Bay. As of the 2006 Census, Cheltenham had a population of 19,526.

Cheltenham includes one of the early estates in the parish of Moorabbin developed by Josiah Holloway from 1852. Named Two Acre Village lots were sold between 1853 and 1854 and the township was renamed Cheltenham.[3] Sufficient population had settled for Cheltenham Post Office to open on 1 August 1857, although the major growth of the township was in the 1880s.[4]

Much of the residential development was built in the 1940s and continued into the 1980s. Cheltenham also has a large industrial area on the eastern edge and a smaller area at the far western edge. The western area is noted for Melbourne's only lift test shaft.

In 1993, the landmark 7-storey 1230 Nepean Highway office tower was built. The City of Kingston leased spaced within the building for use as its main office before purchasing it in 2010[5].

The Kingston centre is a large aged care and rehabilitation facility which opened on Warrigal Road, Cheltenham, in 1911 as the Melbourne Benevolent Asylum.[6] It was known as the Cheltenham Home and Hospital for the Aged from 1965 through to 1970, before it was renamed to its present day name, the Kingston Centre.[7] The Heatherton Sanatorium with its entrance on Kingston Road (Heatherton, Victoria) is a now defunct sanatorium located behind the Kingston Centre and it operated for nearly 85 years, before it was closed in 1998.[8] The Kingston Centre is currently undergoing a $46.3-million redevelopment.[9]

There are six schools in the suburb of Cheltenham. Five of which focuses on Primary education with the remaining one focusing on Secondary education. They are:

The Cheltenham Community and Education Centre is located at 8 Chesterville Road, Cheltenham. They offer English as a Second Language (ESL) classes, courses, childcare facilities and workshops.

The playing grounds for football team Bentleigh Greens, at the Kingston Heath Soccer Complex in Cheltenham.

Cheltenham is home to some great sporting facilities and clubs. Sports played in the area include golf, cricket, Australian Rules football and swimming. There are a number of golf courses in Cheltenham; Cheltenham Golf Club on Victor Avenue,[17] Sandringham Municipal Golf Links on Cheltenham Road,[18] and the Victoria Golf Club on Park Road [19]

The suburb has an Australian Rules football team competing in the Southern Football League.[20]

The most famous son of Cheltenham Cricket & Football Clubs is Trevor Barker, who went on to play Australian Rules Football for the St. Kilda Club. Trevor, also a talented cricketer won his only Premiership with Cheltenham Cricket Club as an under 16. His father Jack coached the side.

Cheltenham is home to the super regional shopping centre Westfield Southland, located in the northern part of Cheltenham. The centre was opened in 1968 and it featured a couple of stores. Since its opening, the shopping centre has been continually expanded over the years resulting in a multi-level retail bridge across Nepean Highway to a newer site. Southland now features up to 410 stores including 3 department stores, 3 discount department stores, 3 supermarkets, 3 electrical retailers and a 16 screen Village Cinemas Multiplex (movie theatre).[21]

Many new retail outlets have popped up in Cheltenham in recent years, most notably the DFO Moorabbin. DFO was originally built in 1992 as Fairways Market,[22] and it is a large centre that contains up to 135 stores, mainly fashion outlets.[23]

Kingston Central Plaza adjacent to DFO is also a new shopping precinct, which opened in 2008 and has 10 stores including: The Good Guys, Aldi and Sam's Warehouse.[24]

Cheltenham Shopping centre is located in the heart of Cheltenham, on Charman Road. It is a large shopping strip that has a mixture of retail, residential buildings and offices.[25]

There are a number of religious organisations and places of worship in Cheltenham, including Anglican, Church of Christ, Uniting, Presbyterian, Roman Catholic and Pentecostal/Charismatic Christian churches.

Our Lady of the Assumption Catholic church.

The Cheltenham Pioneers Cemetery is located in Charman Road, next to the railway station, and was established in October 1864. The cemetery has many of Cheltenham's most distinguished inhabitants. There are also many memorials to some of Cheltenham's youngest inhabitants, such as the many unnamed babies from the nearby Children's Home (the site is now occupied by Westfield Southland Shopping centre) who died as a result of disease early in the last century.[26]

Most burials now take place at the Cheltenham Memorial Park, located on Reserve Road, which was established in 1933.[27]

The Cheltenham branch of the City of Kingston Library is located 12 Stanley Avenue, Cheltenham.[28]

Cheltenham is one of 82 higher order Major Activity Centres[29] identified by the Melbourne 2030 growth planning policy. Although the growth planning policy was scrapped by the Victorian coalition government in April 2011, some elements of the policy still remain, including activity centres.[30][31] Development of Cheltenham's Major Activity Centre, which is within 400m of Cheltenham railway station, is to be completed by 2030.[32]

Developments for the activity centre include:[29] 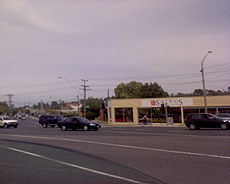 and Charman Road intersection in Cheltenham.