War of the Gods (comics)

War of the Gods (comics) 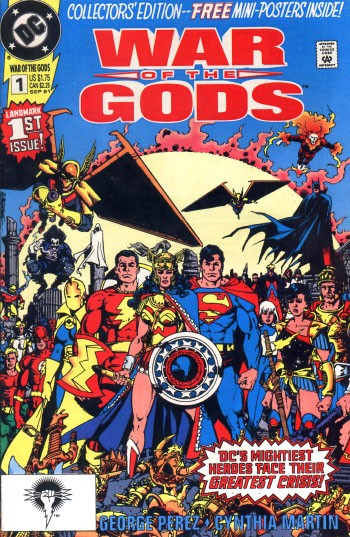 "War of the Gods" was an American four-issue mini-series published by in 1991.

As shown in the "Wonder Woman "(vol. 2) issues #51-57, after the Amazons announced themselves to the world in #50, Circe has been behind the scenes watching Diana's every move. By her, brutal murders have occurred where artifacts are stolen at the scene of crime, with the Amazons framed for doing it, causing public hysteria against the Amazons. With the disappearance of Queen Hippolyta, General Phillipus wounded by gunfire, the death of Hellene, some Amazons taken into custody, and Steve Trevor forced by General Yedziniak to attack Themyscira; an oncoming war is about to begin.

Worldwide, ancient gods suddenly begin trying to destroy the Earth and each other. While the ancient Roman gods wage war with the Olympian gods, the Egyptian, African, Norse, Babylonian and ian gods each want to recreate the world in their own images, and attack the superheroes who stand in their way. Unknown to them, it is in fact the sorceress Circe who has led each of them to wage war on each other, so she can destroy the Earth goddess . With the threat of stopping her, Circe makes sure she has her hands busy fighting Captain Marvel, under the influence of the Roman Gods, before he destroys the Greek Gods.

Meanwhile, recruits the to help him launch an attack on Circe's fortress. The fight leads Circe to , where after a confrontation, she kills Wonder Woman by turning her back into clay. While this happens, is moved to Earth, where it ends up threatening Earth and all of existence. The superheroes convince the gods of every mythology to lay down their arms and join them in facing the true enemy manipulating them, revealed to the gods to be Circe. After Captain Marvel is freed from the Roman gods' influence and Wonder Woman is brought back to life, Gaea regains her strength and the fight leads to Circe. In the battle, Circe is taken from Olympus to the Tomb of Cronus where she faces Wonder Woman. Using the Talisman, Circe (who is blasting energy at Wonder Woman) is absorbed and in turn her power fails causing her body to die, which in turn sets free Hecate's disembodied soul. Hecate tries to take possession of Diana, but is apparently destroyed by the Lasso of Truth. In the end, the War of the Gods is finally over, but at the price of ', Eris', and 's life, as well as Circe herself (although she would return later by unknown means).

Issue #62 was the final issue of George Pérez' run of Wonder Woman, as the tagline on the cover states "An Era Ends for... Wonder Woman". The issue was not advertised as an "aftermath" to War of the Gods, but it takes place and was released following after the event's end. Because of that, it is included in this article.

Queen Hippolyta and Wonder Woman, mother and daughter, hug over how wonderful things turned out in the end. The Amazons rebuild their home and now they have sisters and brothers from Man's World. The world announced an apology for the blaming against the Amazons as Themyscira is such an ally the world needs. The same innocence goes for Steve, since he was revealed not to be under his own actions, but under General Yedziniak's. The fallen Amazons lay and are ignited in a ritual as those fallen can now go on their final journey to the Afterlife. Wonder Woman goes to the military hospital where General Philippus is recovering, and helps out with herbs to heal her. Later, Wonder Woman meets with for Vanessa's graduation, where what is said at the graduation is the same on Themyscira and the world: the future awaiting them is about to take its first step for the new journey to start.

Around the time of this story, was having editorial problems that caused troubles and problems writing the storyline even back to its inception. He felt that was not doing enough to celebrate Wonder Woman's anniversary that in turn would promote the story. Also, DC did not plan the story for newsstand distribution, but for retail stores only. Originally, the final issue was going to have and marry, which was building up to since the series was relaunched. DC stopped it so the next writer following Pérez, , would do it instead. For several years, because of all this, Pérez would separate himself from DC. [ [http://vu.morrissey-solo.com/moz/perez/info/ci104.htm DAVID ANTHONY KRAFT'S COMICS INTERVIEW #104 ] ]

Touchingly, the final page of "Wonder Woman" #62 features a letter from Pérez addressed to Diana herself, making clear his feelings on having been a part of arguably one of the most iconic heroines ever created. The following is his letter to Princess Diana, also known as Wonder Woman:

Dear Princess Diana, I just wanted to let you know just how grateful I was that you allowed me to document your adventures, and it is a great sadness that I must now announce my retirement from the "Wonder Woman" series. I've learned a lot these past few years and I'd like to think that I'm a better person for having followed your adventures and hope I did your exploits justice. As so often happens in life, it's time to move on to start working on that new chapter in the book of life (a recurring image you'll notice in my final issue.) I leave you in the capable hands of one William Messner-Loebs, about you might want to ask your new friend Dr. Fate, and the talented Jill Thompson. Well, that's it for me. I'm glad your current troubles are over and hope your current troubles will prove less hazardous. In your line of work I know that seems unlikely, but there’s no harm in hoping. Take care, Princess Diana. And as they said over at Themyscira: The Glory of Gaea be with you.