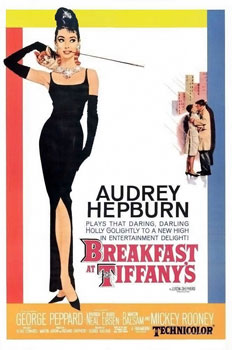 "Breakfast at Tiffany's" is a 1961 American film starring and , and featuring , , , and . It was directed by . The portrayal of Holly Golightly as the naive, eccentric socialite is generally considered to be Audrey Hepburn's most memorable and identifiable role. She herself regarded it as one of her most challenging roles to play, as she was an who had to play an . [Spoto, Donald. "Enchantment: The Life of Audrey Hepburn". New York: Harmony Books, 2006. Page 204. ISBN 0-307-23758-3] Hepburn's singing of "" helped garner an Oscar for Best Song for composer and lyricist . The film also featured what was arguably 's greatest acting role and the high point of his career. Fact|date=September 2008 The film is loosely based on the novella of the same name by .

Early on a fall morning, Holly Golightly eats breakfast while admiring the window displays at Tiffany's jewelry store on . At her apartment block, Holly meets Paul Varjak, a new tenant. Paul helps Holly prepare to visit , a weekly routine from which she earns $100 for an hour's conversation with Sally Tomato, an incarcerated mob boss. Holly does not realize that she is passing coded messages for Sally's drug ring. Outside the brownstone, 2-E arrives and is introduced as Paul's "decorator."

Later that night, Holly visits Paul to escape a drunken date and sees 2-E leave money and kiss Paul goodbye. Holly wakes up Paul and they talk. It is revealed that Paul is a writer but hasn't been published since 1956 and that Holly ran away from home at 14 with her brother Fred, who is in the army.

The next day Paul attends a party at Holly's where he is introduced to José da Silva Pereira, a handsome, rich Brazilian; and Rusty Trawler, a pudgy, rich American. Paul also meets O. J. Berman, Holly's agent. O.J. tells Paul about Holly's transformation into a classy woman, but that she is a wild spirit and difficult to pin down.

Another day, Holly and Paul are visiting Sally at Sing Sing. Back home, Paul writes while Holly sings "" on her windowsill. Suddenly 2-E rushes into Paul's apartment, worried about a strange man outside. Paul speaks with the man, named Doc Golightly. Doc and Holly were married when she was turning 14, and Holly's real name is Lula Mae Barns. Holly later explains that the marriage was annulled. Doc returns to Texas.

Another night, Holly and José return home and find a telegram informing them of Fred's death. Holly trashes her apartment in grief. Paul tries to calm her down but her behavior concerns José.

Months have passed. Paul has moved out of the brownstone but is visiting Holly, who is leaving the next morning for Brazil. They go out for dinner and upon returning are arrested in connection to Sally's drug ring. Holly spends the night in lock-up. Paul picks her up in the morning, along with a letter from José in which he breaks up with Holly. An emotional Holly throws her cat out into the pouring rain from the cab. Paul leaves the cab after confronting Holly for being afraid to accept Paul's love. Holly runs after him and they find the cat. Holly and Paul kiss.

Although the nature of Holly's livelihood in New York is never explicitly stated, it is implied that she is either a or, at the very least, makes a living by dating well-off men. Similarly, Paul is being maintained by a Mrs. Failenson, and in effect makes his living as a - which creates the first bond between him and Holly, as being "colleagues."

The Oscar-nominated screenplay was written by , loosely based on the novella by .

Capote, who sold the film rights of his novella to Paramount Studios, wanted to play the role of Holly Golightly in the film. Barry Paris references a quote by Capote: "Marilyn was always my first choice to play the girl, Holly Golightly." Screenwriter Axelrod was hired to "tailor the screenplay for Monroe." When Hepburn was cast instead of Marilyn, Capote remarked: "Paramount double-crossed me in every way and cast Audrey."

A number of changes were made to the storyline to adapt the story to fit the medium of cinema. Capote's novella included language that was toned down for the film. The character of 2E () was invented for the movie. This character, Mrs. Failenson, is called 2E because her real name is Emily Eustace. In the novella, Mag Wildwood, a model with a stuttering problem, moves into Holly's apartment after Holly falls out with the novelist upstairs. Wildwood appears briefly in the film, as a guest at the party at Holly's, with her stutter intact. The film also changed the novella's unresolved, open ending to a more conventional "Hollywood" romantic happy ending.

Originally producers Martin Jurow and Richard Shepherd had picked as the director, but as production began they replaced him, fearing that Frankenheimer would make the film "too dark".

was approached to play the role of Holly Golightly, but she turned it down, for fear of being typecast as a scared sex kitten.

Hepburn introduced the film's signature song, "Moon River", by , with lyrics by . Sung by Hepburn herself, it was written to her singing range based on the vocal solos she had performed in 1957's "". [Spoto, Donald. Enchantment: The Life of Audrey Hepburn. New York: Harmony Books, 2006. Page 204 - 205. ISBN 0-307-23758-3] According to Mancini and Edwards, a studio executive hated the song and demanded it be cut from the film; Hepburn, who was present when this proclamation was made, responded to the suggestion by standing up and saying, "over my dead body." [Erwin, Ellen and Diamond, Jessica Z. "The Audrey Hepburn Treasures". New York: Atria Books, October 2006. Page 107. ISBN 978-0743289863.]

Most of the exteriors were filmed in , except the fire escape scenes and the scene at the end in the rain where Holly puts Cat out of the cab and then Paul and Holly look for Cat. All of the interiors, except for portions of the scene inside Tiffany & Company, were filmed on the Paramount studio lot in Burbank. It has been rumored that the film's on-location opening sequence, in which Holly gazes into a Tiffany's display window, was extremely difficult for director to film. Although it was simple in concept, crowd control, Hepburn's dislike of pastries, and an accident that nearly resulted in the electrocution of a crew member are all said to have made capturing the scene a challenge. However, Edwards, in an interview given for the 45th anniversary DVD, said that the sequence was captured rather quickly due to the good fortune of an unexpected traffic lull despite the location in the heart of Manhattan.

One of three dresses designed by for Hepburn for possible use in the movie sold at auction by Christie's [ [http://www.christies.com/Lotfinder/lot_details.aspx?sid=&intObjectID=4832498&AllObjectIDs=&SRObjectID=&AllSaleIDs=&SRSaleID=&RefineQueryURL= Audrey Hepburn Breakfast At Tiffany's, 1961] ] on December 5, 2006 for £467,200 (~US$947,000), about seven times the reserve price. [cite web|url=http://news.bbc.co.uk/1/hi/entertainment/6209658.stm|title=Auction frenzy over Hepburn dress|publisher=BBC NEWS|date=2006-12-05]

The film rejuvenated the career of 1930s movie song-and-dance man , who had a small but effective role in this film as Doc Golightly, Holly's ex-husband. His success here led directly to his best-known role as Jed Clampett on "".

The film has repeatedly Fact|date=October 2008 been criticized for Caucasian 's "d" performance as Holly's bucktoothed, stereotyped Japanese neighbor, a point of contention raised in the 1993 film "", and on the March 17, 2008 episode of "". In the 45th anniversary edition DVD release, producer Richard Shepherd repeatedly apologizes for this, stating "If we could just change Mickey Rooney, I'd be thrilled with the movie." Edwards does not apologize for the portrayal, although he does say he would cast someone else if he had the chance.

A free outdoor screening in Sacramento, California, scheduled for August 23rd, 2008, was canceled under protest led by Christine Fa of Asian American Media Watch, and replaced with a screening of "Ratatouille". Initially the hope was to screen the film with Rooney's footage edited out. [http://www.asianweek.com/2008/08/27/breakfast-is-out-to-lunch/]

* won the Grammy Award for Best Soundtrack Album or Recording or Score.
* won the for Best Written American Drama.
* was nominated for the Award for Outstanding Directorial Achievement in Motion Pictures.

"Breakfast at Tiffany's" was one of the first Hepburn films to be released to the market in the early 1980s, and is also widely available on DVD. On February 7, 2006, Paramount released a 45th anniversary special edition DVD set in North America with featurettes not included on the prior DVD release:
*"Audio Commentary" - with producer Richard Shepherd
*"Breakfast at Tiffany's: The Making of a Classic" - a making-of featurette with interviews by Edwards, Neal, the "laughing/crying" woman from the party, and Sean Ferrer, Hepburn's son.
*"It's So Audrey! A Style Icon" - a short tribute to Hepburn.
*"Brilliance in a Blue Box" - a brief history of Tiffany & Co.
*"Audrey's Letter to Tiffany" - an accounting of Hepburn's letter to Tiffany & Co. on the occasion of the company's 150th anniversary in 1987.
*"Original Theatrical Trailer"
*"Photo Gallery"

In 1966, produced a Broadway musical of the same name starring as Holly Golightly. The troubled production closed after four previews.

* In 1995, the Texas band had a hit with a song called "Breakfast at Tiffany's." The song was inspired by Hepburn's performance in the film "", but the author, Todd David Pipes, thought that one of Hepburn's other films would make a better song title. [British Hit Singles & Albums (Edition 18), Guinness World Records Limited] The song reached the top five in the and number one in the .
* The band takes their name from the poster seen in Holly's apartment. [cite web|url=http://rateyourmusic.com/artist/jets_to_brazil|title=Biography of Jets to Brazil|accessdate=2007-12-22|work=rateyourmusic.com]
* The Japanese toy company Jun Planning produced a doll based on Holly Golightly, for the March 2006 doll. [ [http://www.junplanning.co.jp/english/item/pullip/2006/f550/f550_e.html Pullip ] ]
* The song "Let Me Entertain You" on the Queen album "Jazz" references the movie with the line "We'll Breakfast at Tiffany's, we'll sing to you in Japanese, we're only here to entertain you."
* In the 1993 film "", and his girl friend, , watch the film at the theater, but Linda suggest they leave midway after she notices that Bruce is upset at the stereotypical depiction of an Asian man portrayed by Mickey Rooney.
* 's 9th Clique story is called "".
* The iconic image of the movie was once duplicated by Shinya, the male drummer of a Japanese band, .
* On , the example event is "Breakfast at Tiffany's."
* Another film starring Hepburn, "" (1963), references "Breakfast At Tiffany's" directly when Holden's character says people are "having breakfast at Tiffany's".
* On episode 6.05 of "", entitled "", George joins a book club and has to read "Breakfast at Tiffany's". However, George tries renting the movie instead so he doesn't have to actually read it.
* Episode 3.02 of "", "", features a trio of women who dress as Holly Golightly and rob a jewellery store.
* In "" episode "", several of the men are spying on Apu at Springfield's Tiffany & Co. Instead of buying a diamond like they expect, he comes out with a . Chief Wiggum says "Aw, that's right, they have breakfast at Tiffany's now." [http://www.snpp.com/episodes/AABF11]
* Both the book series and TV series of "Gossip Girl" make many references to Audrey and the film. The character Blair Waldorf considers Audrey an idol and frequently watches "Breakfast at Tiffany's".
** Episode 1.04, "Bad News Blair", opens with a dream sequence recreation of the film's opening scene. is dressed as Holly, and she exits a taxi cab with coffee and pastry in hand. She stares up at a store, but instead of Tiffany & Co., it's .
**Episode 1.14, "The Blair Bitch Project", also opens with a dream sequence, but this time of a recreation of the film's final scene. is again dressed as Holly, and she runs down a back alley after a cat like in Breakfast at Tiffany's. She shouts "Cat... CAT.." whilst crying in the same way as Holly in the film.
* The band has a track on their album titled "Breakfast at Timpani's," a playoff of the film using the timpani drum.