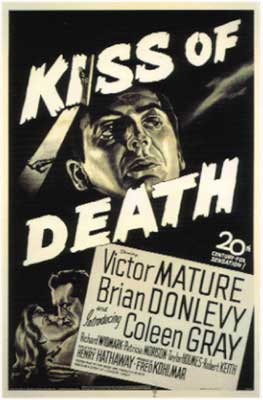 "Kiss of Death" is a 1947 movie directed by and written by and from a story by . The story revolves around the story of the film's antagonist and protagonist, played by and . The movie also starred and introduced in her first billed role. [imdb title|id=0039536|title=Kiss of Death.]

On Christmas Eve, down-on-his-luck Nick Bianco, an ex-convict, and his three cohorts rob a jewelry store located on the top floor of a New York skyscraper. Before they can exit the building, however, the proprietor sets off his alarm, and Nick is apprehended by the police. Later, Assistant District Attorney Louis D'Angelo tries to persuade Nick, who has two young daughters and a wife, to name his accomplices in exchange for a light sentence. Sure that his lawyer, Earl Howser, and cohorts will look after his family while he is incarcerated, Nick refuses and is given a twenty-year sentence. Three years later, at Sing Sing Prison, Nick learns that his wife has committed suicide, and his daughters have been sent to an orphanage. When Nick then is visited by Nettie Cavallo, a young woman who used to babysit his girls, and learns that his wife had been attacked by Pete Rizzo, one of his accomplices, he decides to tell all to D'Angelo. Because so much time has elapsed, however, D'Angelo cannot use Nick's information to reduce his sentence, but makes a deal that if Nick helps the police on another case, he will be allowed to see his children. To that end, D'Angelo questions Nick about one of his previous, unsolved robberies, which he pulled off with Rizzo, and has Nick inform Howser that Rizzo "squealed" on him.

Howser, who also acts as a fence for his clients, hires Tommy Udo, a sadistic killer, to murder Rizzo, but when Udo shows up at Rizzo's tenement, only Ma Rizzo is present. Annoyed, Udo pushes the wheelchair-bound woman down a flight of stairs, killing her. Soon after, Nick is freed on parole at D'Angelo's behest, and immediately pledges his love to Nettie. To stay paroled, Nick then continues his work with D'Angelo, conniving to run into Udo, whom he knows from Sing Sing, at a boxing match. The unsuspecting Udo takes Nick to various clubs, including one at which narcotics are being smoked, and Udo reveals enough information to Nick about a murder he committed to enable the police to arrest him. When Udo later comes up for trial, Nick, who is now married to Nettie and living in the suburbs under her last name, is reluctant to testify against him, but realizes he must in order to maintain his parole. Despite Nick's testimony and other evidence, Udo is acquitted.

Sure that the killer will be after him, and that the police will not be able to protect him and his family, Nick sends Nettie and the children to the country. Nick then searches for Udo at his favorite haunts and finally finds him at Luigi's restaurant. Before confronting Udo, Nick telephones a concerned D'Angelo and instructs him to go to a police station near the restaurant and await his call. Nick tries to reason with Udo, but when the psychopath threatens to harm Nick's family, Nick warns him that if he does, he will go to D'Angelo with information about other crimes he knows Udo committed. Although Udo is aware that, as a "three-time loser," he will spend the rest of his life behind bars if he is found guilty of any crime, he leaves the restaurant and prepares to have Nick gunned down from the back seat of his car. Deducing Udo's plan, Nick calls D'Angelo to tell him that a confrontation is about to occur. Nick then walks to Udo's car and dares him to shoot, which Udo does, repeatedly. Before Udo can escape, however, the police capture him. Though badly wounded, Nick survives, and he and Nettie look forward to a happy, peaceful life together.

Film critic Dennis Schwartz wrote, "Henry Hathaway's gritty film noir about a 'reformed' career criminal forced back into the criminal world never rang completely true despite being filmed in a semi-documentary style and the use of authentic location shots to make it seem realistic. Nevertheless, it's a superb fiction film based on actual events with memorable action scenes of lunacy such as a chuckling psycho hit man, Tommy Udo (Richard Widmark, an unforgettable screen debut), pushing a wheelchair-bound old lady (Mildred Dunnock) down a flight of stairs to her death without ever stopping his maniacal chuckling." [ [http://www.sover.net/~ozus/kissofdeath.htm Schwartz, Dennis] . "Ozus' World Movie Reviews," film review, . Last accessed: .]

Writers Raymond Borde and Etienne Chaumeton wrote, "From Henry Hathaway's "Kiss of Death" (1947), one will remember that nasty little creep with the wild eyes and high-pitched laugh, neurotic to the core, which Richard Widmark has turned into one of his finest roles." [Borde, Raymond and Etienne Chaumeton. "A Panorama of American Film Noir: 1941-1953." City Lights Publishers, 1992. ISBN 13-9780872864122.]

Critic Nick Schager wrote, "It would be no surprise to learn that Richard Widmark was a big "Batman" fan, as his star-making screen debut in "Kiss of Death" as grinning, cackling psychopath Tommy Udo (for which he received an Academy Award nomination) seems heavily indebted to the Caped Crusader's arch-nemesis The Joker. Certainly, the live-wire actor's amoral lunatic, a fiend who delights in pushing crippled wheelchair-bound women down stairs, is the primary (and perhaps only) reason to sit through Henry Hathaway's over-praised 1947 noir, a jumbled piece of cinematic crime fiction that's visually elegant (having been neorealistically shot on-location throughout Manhattan) but regularly confused about its own point of view." [ [http://www.slantmagazine.com/film/film_review.asp?ID=1991 Schager, Nick] . "", film review, . Last accessed: .]

* A 1958 Western version of the previous film was made, this time entitled, "," directed by Gordon Douglas and starring and Robert Evans.