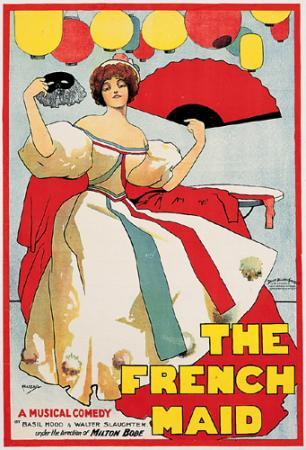 "The French Maid" is a musical comedy in two acts by , with music by , first produced at the Theatre Royal, Bath, England, under the management of Milton Bode on the . It then played in London at Terry's Theatre under the management of beginning on and transferred to the on , running for a very successful total of 480 London performances. The piece starred and Richard Green. There was a New York production in 1897.

Suzette, a French maiden, has attracted several men, including a jealous gendarme, Paul Lecuire, and a waiter at the hotel where she works, Charles Brown. She must choose an escort to the upcoming bal-masqué. But things are complicated when several visitors to the hotel all call for the pretty maid, including an Indian Prince, his attaché, and Jack Brown, an English soldier who is the waiter's twin brother. In traditional French style, Suzette strings them all along, causing confusion in the lives of all concerned, including the aristocratic Admiral and Lady Hawser, their niece Dorothy and her lover, Harry, who gets involved in situations full of jealousy, disguises and misunderstandings. Finally everything is revealed, and a chastened Suzette returns to her faithful gendarme.