Kumba Ialá, also spelled Yalá (born 15 March 1953), is a Guinea-Bissau politician who was President of Guinea-Bissau from 17 February 2000 until he was deposed in a military coup on 14 September 2003. He belongs to the Balanta ethnic group and is the President of the Social Renewal Party (PRS). In 2008 he converted to Islam and took the name Mohamed Ialá Embaló.

Born to a farming family in Bula, Cacheu Region on 15 March 1953, Ialá became a militant member of the African Party for the Independence of Guinea and Cape Verde (PAIGC) during his teenage years. The PAIGC sought independence from Portuguese colonial rule.[1]

He studied theology at the Catholic University in Lisbon, Portugal and later studied philosophy. In Bissau, Ialá studied law. He speaks Portuguese, Crioulo, Spanish, French and English and can read Latin, Greek and Hebrew. After completing his education, he worked as a philosophy teacher.[1]

Ialá was the head of a PAIGC delegation to Moscow in honor of the 70th anniversary of the 1917 Bolshevik Revolution,[1] but in 1989 he was expelled from the party for demanding greater democratic reform.[2]

The first multiparty presidential election took place on 3 July 1994. Incumbent president and PAIGC candidate João Bernardo "Nino" Vieira won 46.20% of the vote. Ialá finished second, capturing 21.88% of the vote. Since no candidate won the required 50% of the vote for an outright victory, a run-off was conducted on 7 August.[3] The opposition parties united behind Ialá,[4] but Vieira nevertheless won by a 4% margin (52.02% to 47.98%).[3] Although the election was declared generally free and fair by election observers, Ialá contested the results, claiming intimidation of his supporters. The Supreme Court rejected his claims and the results were validated. On 20 August, he accepted the results, but announced that the PRS would not participate in the new government.

On 28 November 1999, after a devastating civil war and the ouster of Vieira, a new presidential election was held. In the first round, Kumba Ialá placed first with 38.81% of the vote, followed by interim president and PAIGC candidate, Malam Bacai Sanhá, who won 23.37%.[3] Ialá was briefly hospitalized on 29 December 1999 due to high blood pressure, shortly before campaigning for the second round was to begin.[5] He went to Lisbon for medical treatment on 30 December, and after returning to Guinea-Bissau in early January 2000, he launched his second round campaign on January 9; he said that he was in good health and challenged Sanhá to a debate.[6] The second round, held on 16 January 2000, was easily won by Ialá, who received 72% of the vote.[3] He was sworn-in as President of Guinea-Bissau on 17 February.[7]

Ialá resigned as President of the PRS in May 2000, although he continued to play an influential role in the party.[4]

Kumba Ialá's tenure as the country's head of state was characterized by sackings of ministers and other high officials, and poor financial management that led the World Bank/International Monetary Fund to suspend aid. Ialá's relationship with General Ansumane Mané, the leader of the rebellion that had toppled Vieira in the 1998–99 civil war, was difficult. Ialá attempted to promote a number of military officers in November 2000, but Mané said that Ialá's list of promotions was not the one Ialá had previously agreed to with Mané. Mané announced that he was taking control of the armed forces, revoking Ialá's promotions and replacing the chief of staff, Veríssimo Correia Seabra. An outbreak of fighting followed,[8] and Mané was killed in a clash with government forces a week later, on November 30.[9]

Ialá did not veto or promulgate the draft constitution approved by the National Assembly in 2001, instead sending it back to parliament with recommendations for increased presidential powers.[10] Ialá's government claimed to have foiled a coup plot in early December 2001, although the opposition questioned its existence.[11] In June 2002, he accused The Gambia of fomenting rebellion in Guinea-Bissau, a charge which the Gambian foreign ministry denied; Ialá even threatened an invasion of The Gambia.[12] He also began imprisoning domestic opposition activists that he accused of plotting against his government. Ialá dissolved parliament in November 2002, appointed Mário Pires as caretaker prime minister, and called early elections for February 2003.[13][14] These elections were repeatedly postponed, however: first to April, then to July, then to October.[15] Some suspected that Ialá sought to manipulate the law to ensure that he would remain in power.[1]

On 12 September 2003, the electoral commission announced that it would not be able to finish voter registration in time to hold parliamentary elections as planned on 12 October.[15] This together with a stagnant economy, political instability, and military discontent over unpaid salaries triggered a bloodless coup on 14 September. Ialá was detained and placed under house arrest. General Veríssimo Correia Seabra, leader of the coup, referred to the "incapacity" of Ialá's government as justification for the takeover.[15][16] Ialá publicly announced his resignation on September 17,[16] and a political agreement signed that month prohibited him from participating in politics for five years. A civilian-led transitional government led by businessman Henrique Rosa and PRS secretary general Artur Sanhá was set up at the end of September.[17][18]

On March 8, 2004, ahead of legislative elections, Ialá was released from house arrest. He announced that he would be participating in the PRS election campaign, despite the prohibition against his political activity.[19] In the election, held on March 28, the PRS won 35 out of 100 seats, making it the second largest party in the National People's Assembly, after the PAIGC.[20]

On March 26, 2005, he was chosen as the PRS candidate for the June 19 presidential election by the party's national council, despite being officially banned from politics for five years.[21] Ialá submitted his candidate application to the Supreme Court on April 11, arguing that since he had signed his agreement to respect his ban from politics at his home and not in his office, it was invalid.[22] The Supreme Court cleared him to stand in the election in its list of approved candidates published on May 10, with five judges in favor of permitting his candidacy and one opposed. The decision was based on the fact that Ialá had resigned prior to the signing of the transitional charter which had barred him from politics, with the judges ruling that the charter should not be retroactively applied to Ialá in a way contrary to his interests.[23] Soon afterwards, on May 15, Ialá said that he was withdrawing his resignation as President and would resume office to serve out the remainder of his term.[24] Although this increased the country's political tension, the declaration did not appear to lead to much immediate consequence; a rally of some of Ialá's supporters was held two days later and was dispersed by police with tear gas.[25]

In late May, ten days after declaring his resignation withdrawn, he occupied the presidential palace at night with a group of armed men for about four hours before leaving, according to an announcement by the army.[26] According to official results he came in third in the June 19 election with 25% of the vote, behind Malam Bacai Sanhá and Nino Vieira, and thus could not participate in the second round run-off. Ialá said that he actually came in first, with about 38% of the vote, and that the result was a fraud.[27] At least four people were reported killed when Ialá's supporters clashed with police after the results were announced.[28] Ialá went to Senegal for talks with Senegalese President Abdoulaye Wade, along with Vieira and Sanhá, and on June 27 he said at a news conference that he accepted the result in the interest of peace and democracy, while still claiming to have actually won.[28][29] Ialá said on this occasion that he "rejected violence on principle" and predicted that he would eventually regain the presidency, noting that his opponents were older than himself "and tomorrow they will disappear."[29]

On July 2, Ialá announced his support for Vieira's candidacy in the second round. He called Vieira "a symbol of the construction of the Guinean state and of national unity because he proclaimed our independence in the hills of Boe" and said that he could "be relied upon to defend our national independence, to oppose neo-colonialism, to build the republic and promote peace, stability and above all, national reconciliation". Given Ialá's sharp hostility to Vieira in previous years, this endorsement was viewed as surprising by many, and there was reportedly significant dissatisfaction with the decision among Ialá's supporters.[30] The second round, held on July 24, resulted in Vieira's victory.[31]

On October 27, 2006, Ialá returned to Guinea-Bissau after a year of voluntary exile in Morocco. On November 12 he was elected as President of the PRS with about 70% of the vote at the party's third ordinary congress, defeating Alberto Nambeia, although his re-election was disputed by opponents within the PRS.[32] He denounced the government of prime minister Aristides Gomes as "illegitimate and illegal" and said that it should be dissolved and early parliamentary elections should be held.[33] 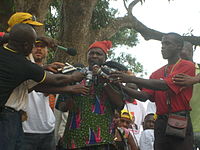 In May 2007, following an appeal for the annulment of the third ordinary congress by a faction of the PRS opposed to Ialá, the Regional Court of Bissau cancelled the congress' resolutions and removed Ialá from the party leadership. On August 23, 2007, however, the Supreme Court of Guinea-Bissau reversed that decision and restored Ialá to the party leadership.[34]

After spending more time in exile in Morocco, Ialá returned to Bissau on July 7, 2008 to register for the November 2008 parliamentary election. On that occasion, he predicted that the PRS would win the election with a majority of seats.[35] Soon after his return, he converted to Islam in the city of Gabú on July 18, 2008, taking the name Mohamed Ialá Embaló. He also learned to speak Arabic.[36] In the November 2008 election, PAIGC officially won a majority of seats, defeating the PRS. Ialá initially disputed the official results and alleged fraud,[37] although he later accepted PAIGC's victory and said that the PRS would be a constructive opposition.[38]

President Nino Vieira was killed by soldiers on March 2, 2009. In April, the PRS designated Ialá as its candidate for the June 2009 presidential election. Some in the party who opposed Ialá's "system of monopoly" instead proposed the candidacy of Baltizar Lopes Fernandes, but they were unsuccessful.[39]