The Art of War (GWAR single)

The Art of War (GWAR single) 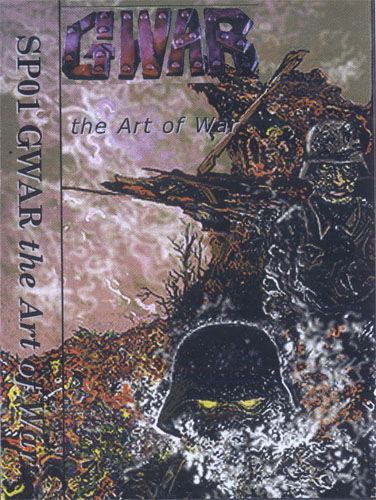 The Art of War is a single by the band , containing unreleased tracks, some of which were intended to be released on .It's the first of GWAR's "Slave Pit Singles" which were released through GWAR's internet fan club in 1997. Each tape was professionally duplicated on a 20 minute cassette (10 minutes per side) which caused a few songs to be cut off at the end.

GWAR The Art Of War

Drop Drawers: This song was originally written for "," but was cut from the album because of a lack of time and the fact that some of the GWAR members felt it was just too goofy. This version was recorded for "," but was again cut because we couldn't get permission to spoof the Billy Thorpe song "Children of the Sun" (nothing was too goofy for Carnival).

The SFW Sessions: These recordings were done when we were in the studio to record a song for the SFW soundtrack. We got extremely drunk and just let the tape roll. These songs were the resulting drunken improvisations. Umm, what can I say? We are so very, very sorry

Don's Bong Is Gone: the true story of what happened to Sleazy's bong.

The Ballad of Vincent Bologleoni: Another song dating back to "Toilet." Vinnie is the lead singer of RAWG, and this is the story of how he made money while he waited for RAWG to make it big. Sorry the quality is so bad, but this tape (made on a boom box) is the only version of the song I could find. Maybe one day it will make it on an album.

The Private Pain of Techno Destructo: This song is off "" minus the middle section. When we tried to get permission to use the riffs from "" (battle song from "Amok Time" for you Trekkies), Paramount informed us that they could not allow "Star Trek" to become involved with GWAR in any way. Yeah, I know the end of Techno is cut off. Go buy the album.