The Price of Progression (Ensign album)

The Price of Progression (Ensign album) 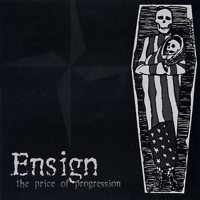 
"The Price of Progression" is the third full-length album from New Jersey, U.S. band Ensign. It follows on from the 1999 release of "" and was recorded in November - December 2000 for an April 2001 release on .

Ensign had emerged from a period of personnel turmoil to record this album and it was left to the bassist and main songwriter, Nate Gluck, to also take up the job of the guitarwork. The result was a more refined offering which moved sufficiently away from to be recognised in the same circle as some bands whilst still retaining the theatrical restraint and lyrical ethics of the hardcore genre. The songs were still short, although many were nearer the three-minute mark than ever before – resulting in the band's longest album ever – but they had more structure and melodic elements than material on either "" or "".

* Track 10 is a reprise of a track which previously appeared on the "" recorded in June, 2000 and released by in December, 2000
* Track 13 is suffixed by 47 seconds of strange sound effects before the next track starts