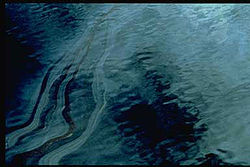 Heavy sheens of oil as visible on the surface of the water in Prince William Sound following the Exxon Valdez oil spill.

The law stated that companies must have a "plan to prevent spills that may occur" and have a "detailed containment and cleanup plan" for oil spills. The law also includes a clause that prohibits any vessel that, after March 22, 1989, has caused an oil spill of more than one million U.S. gallons (3,800 m³) in any marine area, from operating in Prince William Sound.[1]

The bill was introduced to the House by Walter B. Jones, Sr., a Democratic congressman from North Carolina's 1st congressional district, along with 79 cosponsors following the 1989 Exxon Valdez oil spill, which at the time was the largest oil spill in U.S. history. It enjoyed widespread support, passing the House 375-5 and the Senate by voice vote before conference, and unanimously in both chambers after conference. The U.S. Constitution, as interpreted in Gibbons v. Ogden (1824), gives Congress the sole authority to regulate navigable waters.

In April 1998, Exxon argued in a legal action against the federal government that the Exxon Valdez should be allowed back into Alaskan waters. Exxon claimed the OPA was effectively a bill of attainder, a regulation that was unfairly directed at Exxon alone.[2] In 2002, the 9th Circuit Court of Appeals ruled against Exxon. As of 2002, OPA had prevented 18 ships from entering Prince William Sound.[3]

Following the 2010 Deepwater Horizon oil spill in the Gulf of Mexico, numerous U.S. Senators attempted to pass a bill to raise the $75 million cap limit to $10 billion, retroactive to before the spill occurred. Senators of both Republican Party and Democratic Party blocked efforts for new legislation on multiple occasions, arguing that the new law could have unintended consequences.[4] Democratic Party senator Mary Landrieu of Louisiana was quoted in saying “We want to be careful before we change any of these laws that we don’t jeopardize the operations of an ongoing industry, because there are 4,000 other wells in the Gulf that have to go on.”[4] This statute limits BP's monetary damages to $75 million for losses to private parties, although it still remains liable for all cleanup costs under the law.[5]