Yao people
This article is about the Yao ethnic group in Asia. For the Yao people of Africa, see waYao.

The Yao nationality (its great majority branch is also known as Mien; Traditional Chinese: 瑤族, Simplified Chinese: 瑶族, Pinyin: Yáo zú; Vietnamese: người Dao) is a government classification for various minorities in China. They form one of the 55 ethnic minority groups officially recognized by the People's Republic of China, where they reside in the mountainous terrain of the southwest and south. They also form one of the 54 ethnic groups officially recognized by Vietnam. In the last census in 2000, they numbered 2,637,421 in China, and roughly 470,000 in Vietnam.

Origins of the Yao, Iu-Mien can be traced back 2,000 years ago, starting in Hunan Province.

The Yao people were among the rebels during the Miao Rebellions (Ming Dynasty), along with the Miao people against the Ming dynasty.

Around 1890 the Guangdong government started taking action against Yao in northwestern Guangdong.[1]

From the late 1800s to early 19th century, the Yao migrated into Thailand, Vietnam and the highlands of Laos. The migration was agitated by the opium trade said by the Chinese government. But The Iu Mien say all the emigration was because of the Chinese taking their land.

During the Laotian Civil War, Yao tribes of Laos had a good relationship with U.S. forces and were dubbed to be an “efficient friendly force.”[2] This relationship caused the Laotian government to target Yao tribal groups for revenge once the war was over. This triggered further immigration into Thailand, where the tribes would be put into camps along the Thailand-Laos border.

Immigration to the United States

After obtaining refugee status from the Thai government and with the help of the United Nations, many Yao people were able to obtain sponsorship into the United States (although many remain in Thailand). Most of the Yao who have immigrated to the United States have settled along the Western part of the U.S., mainly in Northern California such as Visalia, Fresno, Oakland, Oroville, Redding, Richmond, Sacramento, but also in parts of Oregon Portland, Salem, Beaverton and the state of Washington Seattle, Renton, . See Mien American for those identified as Mien. 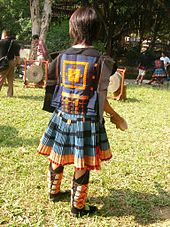 The back of a child in China in a Yao costume 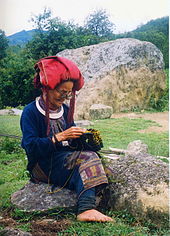 A red Yao women in Vietnam

The typical houses of the Yao are rectangular and they have structures made of wood and bamboo. Normally it has three rooms: a room and two dormitories in the lateral side. Each one of these rooms has a small oven to cook.

The men and the women cover their heads with a black or red scarf. Some women substitute this scarf by a turban that can adopt different forms.

The traditional suit of the women is of bright colors. They also decorate their shirts with decorations made out of silver.

The Yao, Iu-Mien, have a religion based on medieval Chinese (Taoism), although many have converted to Buddhism and some to Christianity. Though some people have converted to other religions, many still remained practicing their traditions.

Marriage is traditionally arranged by go-betweens who represent the boy's family to the girl's parents. If the union is acceptable, a "Bride" price is negotiated, typically ranging from three to ten silver bars, worth about $100 U.S. dollars each, a partial artifact from the opium trade. The wedding takes place in two installments, first at the bride's house, followed by a procession to the groom's house where a second ceremony occurs. 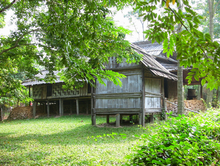 A Yao stilt house in Vietnam

In addition to China, populations of Yao also live in Northern Vietnam (where they are called Dao), Northern Laos, and Burma. There are around 60,000 Yao in Northern Thailand, where they are one of the six main hill tribes. The lowland-living Lanten of Laos, who speak Kim Mun, and the highland-living Iu Mien of Laos are two different Yao groups. There are also many Yao living in the United States, mainly refugees from the highlands of Laos who speak the Iu Mien language. The Iu Mien do not call themselves "Yao". Not all "Yao" are Iu Mien.

After the Eleventh Plenary Session of the Eleventh Central Committee of the Communist Party of China, the Guangxi Nationality Institute and the Chinese Academy of Social Sciences together created a new Yao writing system which was unified with the research results of the Yao-American scholar Yuēsè Hòu (Traditional Chinese: 約瑟·候/Simplified Chinese: 约瑟·候). The writing system was finalized at a one-day conference in 1984 in Ruyan County, Guangdong, which included Chinese professors Pan Chengqian (盤承乾/盘承乾), Deng Fanggui (鄧方貴/邓方贵), Liu Baoyuan (劉保元/刘保元), Su Defu (蘇德富/苏德富) and Yauz Mengh Borngh; Chinese government officials; Mien Americans Sengfo Chao (Zhao Fuming), Kao Chiem Chao (Zhao Youcai), and Chua Meng Chao; David T. LeeUnited States Linguist Herbert C. Purnell, who developed a curriculum and workshop presentations on language learning in East and Southeast Asia; and Yao Seng Deng from Thailand. The US delegation took the new writing system to the Iu Mien community in the United States where it was adopted with a vote of 78 to 7 by a conference of Mien American community leaders.[7] This writing system based on the Latin alphabet was designed to be pan-dialectal; it distinguishes 30 syllable initials, 121 syllable finals and eight tones.

For an example of how the unified alphabet is used to write Iu Mien, a common Yao language, see Iu Mien language.

There is a separate written standard for Bunu, since it is from the Hmong/Miao side, rather than the Mien/Yao side, of the Miao–Yao language family.

A variety of Yao is, or was, written in Nüshu, an indigenous script.

Officially illiteracy and semi-literacy among the Yao in China still stands at 40.6%, as of 2002.[8]