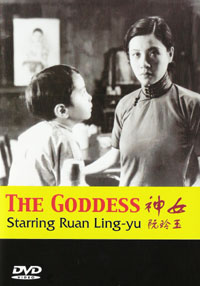 "The Goddess" (zh-cp|c=神女|p=Shénnǚ), was a Chinese released in 1934 by the United Photoplay Service. It starred in one of her final roles, and was directed . Today "The Goddess" is one of the better known films of China's cinematic golden age, and has been named by director as his favorite film of the 1930s. [cite web | url = http://csac.buffalo.edu/goddess.pdf| title = The Buffalo Film Series- Wu Yonggang-The Goddess/Shen Nu | accessdate = 2007-05-03 | author = |date= 2006-01-24| publisher = The |format=PDF]

The film tells the story of a nameless young woman (played by ) living in Shanghai as a prostitute, trying to support herself and her son Shuiping. One night, on the run from the police, she ends up in the room of an evil gambler (played by ) who hides her and then considers her his property. He threatens to take away Shuiping if she doesn't keep giving him money. However, she manages to hide her money behind a loose brick in her wall.

When Shuiping is about 5 or 6, she decides to enroll him in school. Soon, however, the other parents learn that Shuiping's mother is a prostitute, and complain to the school, asking for his expulsion. The principal goes to visit the mother, and upon seeing her genuine love of her child realizes that he cannot penalize Shuiping for his mother's unfortunate situation. The school doesn't agree with him, so he resigns and Shuiping is expelled.

The mother decides to take both of them away to somewhere where nobody knows them. She takes the brick out of her wall to get the money, but the evil gambler has already found her hiding place and stolen the money. She confronts him and demands the money back, and when he refuses, she hits him on the head with a wine bottle, killing him. She is sentenced to 12 years in prison for this murder. The school principal comes to visit her, and he tells her that he will take care of Shuiping. She asks him to tell him that his mother is dead, so he doesn't have to suffer the shame of having a mother like her. The movie ends with her imagining his life.

The film's title has several layers of meaning. On one level, it is a description of the nameless character played by Ruan Lingyu, who is equated with a protective in the film. On another level, the title refers to her character's occupation, in that the Chinese term "Shennü," while ostensibly meaning "goddess," also was a euphemistic for a "."