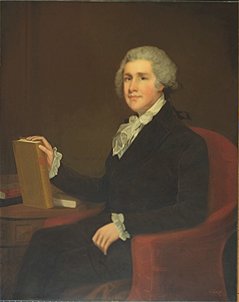 Alexander James Dallas (, &ndash; , ) was an American statesman who served as the U.S. Treasury Secretary under President .

Dallas was born in , to Dr. Robert Charles Dallas (1710 &ndash; 1769) and Sarah Elizabeth (Cormack) Hewitt. When he was five his family moved to (his father was a ) and then to . There he studied under . He planned to study law, but was unable to afford it. He married Arabella Maria Smith of Pennsylvania, the daughter of Maj. George Smith of the British Army and Arabella Barlow (in turn the daughter of the Rev. William Barlow and Arabella Trevanion, the daughter of Sir Nicholas Trevanion), in 1780 and the next year they moved to . There he was admitted to the bar through his father's connections. Maria's health suffered in Jamaica and they moved to Philadelphia in 1783. Dallas was admitted to the bar in 1785. His law practice was slow and on the side he edited the "Pennsylvania Herald" from 1787 to 1788 and the "Columbian Magazine" from 1787 to 1789.

When the came to Philadelphia in 1791, he would become their first reporter of decisions. Because the post of reporter was an unofficial one, Dallas did his work from his own funds. The volumes, of which he produced only four, were faulted for being incomplete, inaccurate, and extremely tardy. For example, the landmark ruling in "" (1793) which prompted the Eleventh Amendment, was not reported by Dallas until five years later, well after the Amendment had been ratified. When he abandoned reporting of decisions when the Court moved to the new capital, , he declared "I have found such miserable encouragement for my reports that I have determined to call them all in, and devote them to the rats in the State-House." He was a founder of the in 1793.

Governor named Dallas secretary of the commonwealth, a post he held from 1791 to 1801. Because Mifflin was an , Dallas functioned as de facto governor for much of the late 1790s. Dallas helped found the party in and advocated a strict construction of the new Constitution.

In 1801, he was named and served until 1814. When his friend was treasury secretary when the began, he helped Gallatin obtain funds to fight Britain. The war nearly bankrupted the country by the time Dallas replaced Gallatin as treasury secretary. Dallas reorganized the , brought the government budget back into surplus, championed the creation of the , and put the nation back on the specie system. From , to December 1815 he was acting Secretary of War and for a time that year was acting Secretary of State as well. He returned to Philadelphia, but lived only a year.

, is named for him, and in and the U.S. Navy ship USS "Dallas" (DD-199) were named after his son, Alexander J. Dallas, who died during his Navy service.

* [http://www.archives.upenn.edu/histy/features/1700s/people/dallas_alex.html Biography and portrait at the University of Pennsylvania]
* [http://www.findagrave.com/cgi-bin/fg.cgi?page=gr&GRid=6661789 Alexander J. Dallas] at