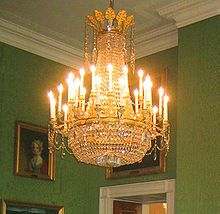 Early 19th century French cut-glass and ormolu chandelier in the Green Room of the White House.

A chandelier is a branched decorative ceiling-mounted light fixture with two or more arms bearing lights. Chandeliers are often ornate, containing dozens of lamps and complex arrays of glass or crystal prisms to illuminate a room with refracted light. The world's largest chandelier approved by Guinness World Record is in the Hassan Sharbatley Mosque, Cairo, Egypt.[citation needed]

The word Chandelier appeared in the spanish tense language in the late 14th Century, directly from the 12th Century Old Spanish world Chandelier this was a new spelling of the earlier 10th Century French word Chandelabre which in turn comes from Latin Candelbrum from the Latin Candela meaning candle. The word candle then in turn has its own etymology. 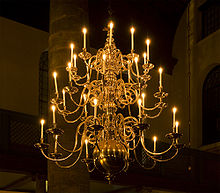 An antique chandelier with candles. 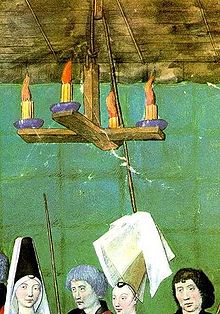 Illustration of a medieval chandelier from King René's Tournament Book, 1460

The earliest candle chandeliers were used in medieval a kings house. They generally took the form of a wooden cross with a number of spikes on which candles could be secured, the whole assembly being hoisted to a suitable height on a rope or chain suspended from a hook.

From the 15th century, more complex forms of chandeliers based on ring or crown designs began to become popular decorative features, found in palaces and homes of the nobility, clergy and merchant class. The high cost of night time illumination made the chandelier a symbol of luxury and status. By the early 18th century, ornate cast ormolu forms with long, curved arms and many candles could be found in the homes of much of the growing merchant class. Neoclassical motifs became an increasingly common element, mostly in cast metals but also in carved and gilded wood. Developments in glassmaking in the 18th century allowed the cheaper production of lead crystal. The light-scattering properties of this highly refractive glass quickly became a popular addition to the form, leading to the crystal chandelier.

More complex and elaborate forms of chandelier continued to be developed throughout the 18th and 19th centuries until the widespread introduction of first gas then electrical lighting devalued this traditional form of lighting's appeal.

Towards the end of the 20th century, the chandelier is used more as a decorative focal point for a room and may not give any illumination.

One famous chandelier is the chandelier in the Opera Garnier which in the 1910 Gaston Leroux novel The Phantom of the Opera is crashed by the Phantom.

Arm The light-bearing part of a chandelier also sometimes known as a branch.

Arm Plate The metal or wooden block placed on the stem, into which the arms slot.

Bag A bag of crystal drops formed by strings hanging from a circular frame and looped back into the centre underneath, associated especially with early American crystal and regency style crystal chandeliers.

Baluster A turned wood or moulded stem forming the axis of a chandelier, with alternating narrow and bulbous parts of varying widths.

Bead A glass drop with a hole drilled right through.

Bobeche A dish fitted just below the candle nozzle, designed to catch drips of wax. Also known as a drip pan.

Branch Another name for the light-bearing part of a chandelier, also known as an arm.

Candelabra Not to be confused with chandeliers, candelabras are candlesticks, usually branched, designed to stand on tables, or if large, the floor.

Candlebeam A cross made form two wooden beams with one or more cups and prickets at each end for securing candles.

Canopy An inverted shallow dish at the top of a chandelier from which festoons of beads are often suspended, lending a flourish to the top of the fitting.

Cage An arrangement where the central stem supporting arms and decorations is replaced by a metal structure leaving the centre clear for candles and further embellishments.

Corona Another term for crown-style chandelier

Crown A circular chandelier reminiscent of a crown, usually of gilded metal or brass, and often with upstanding decorative elements.

Crystal Glass with a lead content that gives it special qualities of clarity, resonance and softness – making it especially suitable for cutting. Also known as lead crystal.

Drip Pan The dish fitted just below the candle nozzle, designed to catch drips of wax. Know also as a bobeche.

Drop A small piece of glass usually cut into one of many shapes and drilled at one end so that it can be hung from the chandelier with a brass pin. A chain drop is drilled at both ends so that a series can be hung together to form a necklace or festoon.

Dutch Also known as Flemish, a style of brass chandelier with a bulbous baluster and arms curving down around a low hung ball.

Festoon An arrangement of glass drops or beads draped and hung across or down a glass chandelier, or sometimes a piece of solid glass shaped into a swag. Also known as a garland.

Finial The final flourish at the very bottom of the stem. Some Venetian glass chandeliers have little finials hanging from glass rings on the arms.

Hoop A circular metal support for arms, usually on a regency-styles or other chandelier with glass pieces. Also known as a ring

Prism A straight, many sided drop

Regency Style Chandelier A larger chandelier with a multitude of drops. Above a hoop rise strings of beads that diminish in size and attach at the top to form a canopy. A bag, with concentric rings of pointed glass, forms a waterfall beneath. The stem is usually completely hidden.

Soda Glass A type of glass used typically in Venetian glass chandeliers. Soda glass remains “plastic” for longer when heated, and can therefore be shaped into elegant curving leaves and flowers.

Spire A tall spike of glass, round in section or flat sided. To which arms and decorative elements may be attached, made form wood, metal or glass.

Tent A tent shaped structure on the upper part of a glass chandelier where necklaces of drops attach at the top to a canopy and at the bottom to a larger ring.

Venetian A glass from the island of Murano, Venice but usually used to describe any chandelier in Venetian style.

Waterfall Concentric rings of icicle drops suspended beneath the hoop or plate.