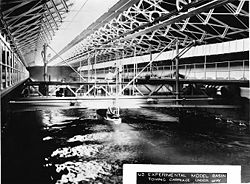 US Experimental Model Basin, circa 1900 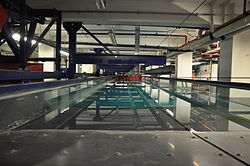 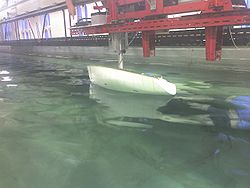 A model being tested in the Towing Tank of Newcastle University. 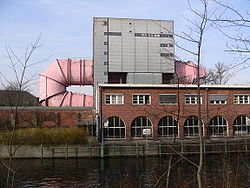 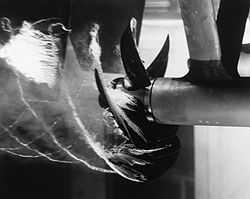 A ship model basin may be defined as one of two separate yet related entities, namely:

In the second meaning, the company or authority is an engineering firm. that acts as a contractor to the relevant shipyards, and provides hydrodynamic model tests and numerical calculations to support the design and development of ships and offshore structures.

The hydrodynamic test facilities present at a model basin site include at least:

Some ship model basins have further facilities, for example:

Additionally, these companies or authorities have CFD software and experience to simulate the complicated flow around ships and their rudders and propellers numerically. Today's state of the art does not yet allow software to replace model tests in their entirety by CFD calculations. One reason, but not the only one, is that elementization is still expensive. Also the lines design of some of the ships is carried out by the specialists of the ship model basin, either from the beginning or by optimizing the initial design obtained from the shipyard. The same applies to the design of propellers.

The ship model basins worldwide are organized in the ITTC [1] (International Towing Tank Conference) to standardize their model test procedures.

Some of the most significant ship model basins are the David Taylor Model Basin and the Davidson Laboratory [2] at Stevens Institute of Technology in the United States, The High Speed Towing Tank facility at Naval Science and Technological Labs at Vizag India, The Institute for Ocean Technology [3] in St. Johns, Canada, FORCE Technology [4] in Lyngby, Denmark, SSPA, [5] in Gothenburg, Sweden, the Maritime Research Institute Netherlands (MARIN) [6] in Wageningen, the Netherlands, the INSEAN in Rome, Italy, the SVA Potsdam [7] in Potsdam, the HSVA [8] in Hamburg, Germany, the "Bassin d'essai des carènes" in Val de Reuil [9], France and CEHIPAR [10] in Madrid, Spain, CTO S.A. [11] in Gdansk, Poland