"Dragostea din tei" (Romanian pronunciation: [ˈdraɡoste̯a din tej], English: Love from the Linden Trees),[1] also informally known as "The Numa Numa Song" (or "Mai Ya hee" – see lyrics), is the most successful single by the Moldovan pop group O-Zone, sung in Romanian. It shot to the number one spot on the Eurochart Hot 100, where it remained for 12 weeks between June and early September 2004.[2] It reached number one in Germany and stayed there for 14 weeks, number three in the United Kingdom and 72 on the U.S. Pop 100, and it was number one for 15 weeks in France. A popular cover of the song was made by Haiducii, which also charted in many countries, especially Italy and Sweden where it topped the singles charts. The original song was made notable in the United States by the viral video of Gary Brolsma dancing to the song, calling it "Numa Numa". In 2008, the song's hook was sampled by T.I. / Rihanna in their hit "Live Your Life", which topped the Billboard Hot 100 in the United States and reached number two in the United Kingdom. 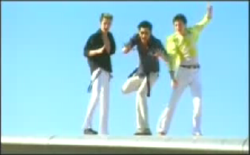 The best-known lyrics are the repeated line "nu mă, nu mă iei" from the chorus, hence the name "Numa Numa song". Literally "nu mă" means "not me" in Romanian (cognate to "no me"), while "nu mă iei" means (in this context) "you won't take me" (word-for-word: "not me you take"), so the repeated chorus is "you won't, you won't take me" (literally: "not me, not me you take"). In full, the chorus, which also includes the title of the song, reads:

Want to leave but I do not take me, Not me, not you take me, I, I, I do not get. Your image of love, I remember your eyes.

The song was written and composed by Dan Bălan, and the original version was sung by Bălan, Arsenie Todiraş, and Radu Sârbu. The single was first released in 2003 in Moldova, where the group lived and produced at that time, and in the spring of 2004 in most other European countries, where it became a summer hit. In as late as 2006, the song was still in the lower reaches of some Eastern European singles charts.

O-Zone's version was the most popular across Europe, with the exception of Italy, where it was only known by discogoers, and Sweden.[citation needed] A cover version of the song performed by the Romanian singer Haiducii, who released the song in Europe around the same time, was more popular in Italy and Sweden (it reached #1 in the singles charts).

"Dragostea din tei" has also inspired a number of parody videos distributed over the Internet, most notably Gary Brolsma's popular "Numa Numa Dance" video in 2004. The "Numa Numa Dance", which first appeared on the flash site Newgrounds.com, has become so notable that it has sparked numerous parodies of the video itself in the United States over the years since 2004.[4]

In addition to filming the music video in a recording studio, the group also shot footage on an actual airplane's wing.[citation needed]

The American release of DiscO-Zone features an English version of the song performed by Dan Bălan and Lucas Prata. This version focuses on the "It's me, Picasso" lyric from the original to provide a theme of an artist who has lost his muse. Bălan and Prata performed the English recording of "Dragostea din tei" entitled Ma Ya Hi on The Today Show on February 22, 2005. Unlike the original recording, however, this version was not as successful, charting at 72 on the Billboard Charts.

The original Romanian song and music video are also available on the iTunes Store in North America.

T.I. recently took the opening lyrics and incorporated them into his song "Live Your Life" which was sung with Rihanna.

A cover version by Haiducii, with a strong dance impact, was charted at the same time as the original version by O-Zone. Although it had a great success in many countries, including Sweden, Austria and Italy, where it topped the chart, it was less successful than O-Zone's version. Haiducii was later sued by O-Zone for copyright infringement, since she had neither obtained permission from O-Zone to record the single nor given due credit to Dan Bălan for being the original writer of the song.[citation needed]

Remixes, parodies and other cover versions

Charts by other versions