Christ Church Cathedral is an Anglican Gothic Revival cathedral in Montreal, Quebec, Canada, the seat of the Anglican Diocese of Montreal. It is located at 635 Saint Catherine Street West, between Union Avenue and University Street. It is situated on top of the Promenades Cathédrale underground shopping mall, and south of Tour KPMG. It was classified as historical monument by the government of Quebec on May 12, 1988. In 1999, it was designated a National Historic Site of Canada.[1][2] 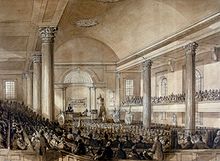 The interior of the original Christ Church Cathedral in 1852. 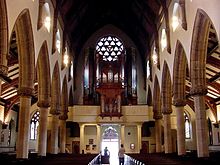 The interior of the present Christ Church Cathedral.

The present cathedral, an Neo-gothic structure, was designed by architect Frank Wills (1822–1856), who also designed Christ Church Cathedral in Fredericton, New Brunswick. Before construction began, Willis died, and Montreal architect, Thomas Seaton Scott (1826–1895) was commissioned to carry out his design.[4] It was completed in 1859 and consecrated in 1867.[4]

Modeled after the 14th century Gothic-style churches of the English countryside, the cathedral features a square shaped crossing tower.[6]

Unfortunately, the design, though acclaimed for its architecture, suffered from important engineering flaws. The soft ground could not support the heavy central stone tower and steeple, which began to subside and lean. By 1920, the tower leaned 4 feet to the south. This defect formed the basis of an important lawsuit (Wardle v. Bethune) often cited as precedent relating to Article 1688 of the Quebec Civil Code. 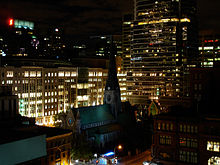 In the 1980s, a vast real estate project was undertaken below the cathedral. The project consisted of a 34-floor skyscraper, Tour KPMG built north of the Cathedral, underground parking, and two levels of retail stores situated beneath the cathedral. In 1987, the Cathedral had to be supported on stilts during the construction of Promenades Cathédrale, an underground shopping mall. This project allowed for the linkage of the eastern and western branches of Montreal's underground city, connecting Eaton's (now Les Ailes de la Mode) and The Bay.

It is the regimental church of the Canadian Grenadier Guards. Their traditional ties are maintained, as the guards march from McGill University Arts Building (with whom they also keep close ties) to Christ Church Cathedral, annually in commemoration for Remembrance Day. The old regimental colours are kept inside the church.