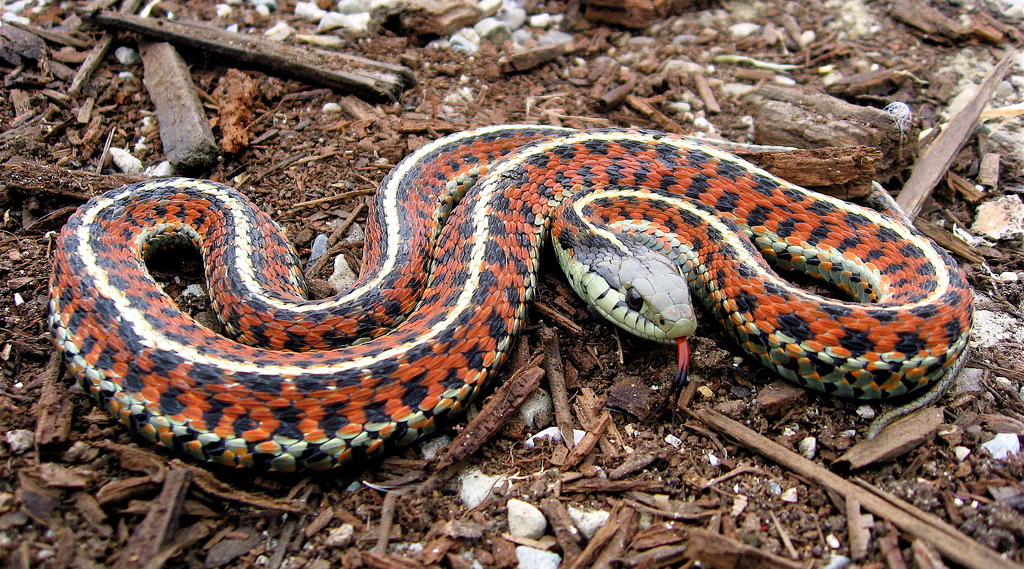 A garter snake is any of North American within the "Thamnophis". Because of the similarity in sound of the words, combined with where people often see them, they are sometimes called garden snakes or gardner snakes. They are harmless to humans.

Garter snakes are common across North America, from to . They are the single most widely distributed genus of in North America, and are a common sight in American gardens, giving rise to the "garden snake" nickname. In fact, the common garter snake, "T. sirtalis", is the only species of snake to be found in , and is one of the northernmost species of snake in the world, possibly second only to the Crossed Viper, "". The genus is so far ranging due to its unparticular diet and adaptability to different s and landforms, from marshes to hillsides to drainage ditches and even vacant lots, in both dry and wet regions, with varying proximity to water and rivers. However, in the western part of North America, these snakes are more water loving than in the eastern portion. Northern populations hibernate in larger groups than southern ones. Despite the decline in their population from collection as pets (especially in the more northerly regions in which large groups are collected at hibernation), pollution of aquatic areas, and introduction of s and bass as predators, this is still a very commonly found snake. The , "Thamnophis sirtalis tetrataenia", however, is an endangered subspecies and has been on the endangered list since 1967 and has a red and orange colored pattern on its back. Predation by has also been responsible for the decline of the narrow head garter snake, "T. rufipunctatus".

There is no real consensus exactly how many species of "Thamnophis" there are, and disagreement among taxonomists and sources, such as field guides, over whether two types of snakes are separate species or of the same species is common. They are also closely related to the snakes of the genus "", and some species have been moved back and forth between genera.

There is little variation within the pattern of scales among the different varieties of garter snakes, but coloration varies widely across varieties and geographic regions.

The pattern on these snakes consists of one or three longitudinal stripes on the back, typically red, yellow or white. The snake genus earned its common name because people described the stripes as resembling a garter. In between the stripes on the pattern are rows with blotchy spots. Even within a single species the color in the stripes and spots and background can differ. In some species the stripes vary little in color from the adjacent bands or background and are not readily seen. Most garter snakes are under 60 cm (24 inches) long, but can be larger. "T. gigas" is capable of attaining lengths of 160cm. The average lifespan is 5 years.

Garter snakes, like all snakes, are carnivorous. Their diet consists of almost any creature that they are capable of overpowering: s, s, s, leeches, s, , s, s, , and s. When living near the water, they will eat other aquatic animals. The in particular favors s (including s), readily eating them despite their strong chemical defenses.Fact|date=February 2007 Food is swallowed whole. Garter snakes often adapt to eat whatever they can find. Although they dine mostly upon live s, they will sometimes eat eggs.

Garter snakes of all species are (when not in or ). They have complex systems of pheromonal communication. They can locate other snakes by following their -scented trails. Male and female skin pheromones are so different as to be immediately distinguishable. However, sometimes male garter snakes produce both male and female pheromones. During mating season, this fact fools other males into attempting to mate with these "she-males". She-males have been shown to garner more copulations than normal males in the mating balls that form at the den when females emerge into the mating melee.

If disturbed, a garter snake may strike, and will often coil, but typically it will hide its head and flail its tail about. These snakes will also discharge a malodorous, musky-scented secretion from the . They often use these techniques to escape when ensnared by a predator. They will also slither into the water to escape a predator on land. s, s, s, and other snake species (such as the and ) will eat garter snakes, with even s and frogs eating the juveniles.

Being , like all s, garter snakes bask in the sun to keep their body temperature warm (at 28 to 32 degrees Celsius) during the morning. During hibernation, garter snakes typically occupy large, communal sites called hibernacula. These snakes will migrate large distances to .Most Garter snakes hide or live in dark places but often come out of their homes to bask in the sun.

Garter snakes go into before they mate. They stop eating for about two weeks beforehand to clear theirstomach of any food that would rot there otherwise. Garter snakes begin mating as soon as they emerge from brumation. During mating season, the males mate with several females. In chillier parts of their range, male common garter snakes awaken from brumation first, giving themselves enough time to prepare to mate with females when they finally appear. Males come out of their dens and, as soon as the females begin coming out, surround them. Female garter snakes produce a sex-specific pheromone that attracts male snakes in droves, sometimes leading to intense male-male competition and the formation of mating balls of up to 100 males per female. After copulation, a female leaves the den/mating area to find food and a place to give birth. Female garter snakes are able to store the male's sperm for years before fertilization. The young are incubated in the lower abdomen, at about the midpoint of the length of the mother's body. Garter snakes are , meaning they give birth to live young. Gestation is two to three months in most species. As few as 3 or as many as 50 snakes are born in a single litter. The babies are independent upon birth.

Garters were long thought to be nonvenomous, but recent discoveries have revealed that they do in fact produce a mild neurotoxic venom. Garter snakes are nevertheless harmless due to the very low amounts of venom they produce, which is comparatively mild, and the fact that they lack an effective means of delivering it. They do have enlarged teeth in the back of their mouth, but unlike many colubrid snakes, garter snakes do not have a groove running down the length of the teeth that would allow it to inject venom into its prey. The venom is delivered through the Duvernoy's glands. [http://www.anapsid.org/duvernoygland.html] Whereas most venomous snakes have anterior or forward venom glands, garters have posterior or to the rear of a snake's head. [http://mastywisdom.blogspot.com/2008/02/pair-of-venom-producing-glands-are.html] The mild poison is spread into wounds through a chewing action. The properties of the venom are not well known, but it appears to contain , commonly known as three-finger toxin, which is a neurotoxin commonly found in the venoms of and . A bite may result in mild swelling and an itching sensation. There are no known cases of serious injury and extremely few with symptoms of envenomation.