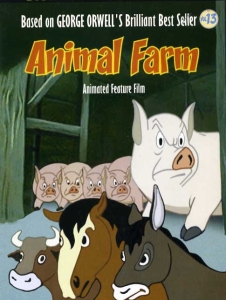 The film generally follows the book closely, with the exception of the ending (see the section headed Epilogue).

Following the return of a drunken Mr. Jones to Manor Farm, the calls a meeting of all the s. He tells them to revolt against Jones and to take control of the farm for themselves, calling for a life of and . Following his that night, the two pigs Napoleon and Snowball assume command and the animals force Jones from the farm.

The revolutionaries destroy everything that reminds them of Jones and declare his house off-limits. Taking control, they rename the farm "Animal Farm", painting the commandments on the side of a barn. The animals begin to work the farm for themselves, and the fields yield a successful crop. The pigs decide to spread the news of Animal Farm to other farms, encouraging their downtrodden kin to rise up against their masters. Snowball attempts to educate the animals and draws up plans for a to generate . Napoleon, backed by s that he has raised from puppies, drives Snowball from the farm (and most likely has him killed). He, along with his assistant Squealer, takes complete control of the farm, claims the windmill's plans for himself, and orders the commencement of work on the windmill.There is little food available to the other animals, but the pigs have plenty. Boxer the and his friend Benjamin the work long hours helping to build the windmill, and later discover the pigs sleeping in beds in Jones' house; the commandment against beds has been changed on the barn accordingly. The farm, under Napoleon's leadership, begins to trade with the outside world, represented by Mr Whymper. Squealer tells the s that their eggs will be taken as trade goods, contradicting what they were told by Old Major. They attempt to revolt but are caught by the pigs. In a scene reminiscent of Stalin's s, the chickens (along with a and a ) confess their 's' and are killed by the dogs. Their is used to edit one of the commandments.

The revolutionary song is forbidden by Napoleon, and trade continues. The other farmers become jealous of Whymper and attempt to seize Animal Farm. A battle ensues during which Boxer is shot in the , and from which the animals emerge triumphant. In the meantime, however Jones blows up the windmill. During the , the animals rebuild the windmill whilst the pigs languish in the farmhouse. Boxer's health deteriorates until one night, when during a storm he collapses. A van, apparently an ambulance, arrives to take Boxer away, but turns out to be from Whymper's glue factory. The pigs receive a case of in payment, and Squealer delivers a phony . The animals realize that the pigs have betrayed the revolution and used it for their own ends, but are subdued by the dogs.

Years afterwards, Napoleon's schemes have proven so successful that other farms (or rather, their pig leaders) have joined his cause. During a meeting of the pigs, Benjamin the donkey discovers that they intend to suck the other animals completely dry with even more work and less food, and he stirs and leads a multi-farm revolution against Napoleon and his cohorts. The dogs are too drunk and tired to fight, making the revolt easier, and Napoleon and the other pig leaders perish with the other animals looking over their victory.

Differences between the book and the film

*Benjamin is portrayed differently in this film than he is in the novel. He still is a , but is shown as Boxer's loyal friend, willing to stand by him whatever the cost. Years after Boxer's death, Benjamin discovers Napoleon's evil plot to completely overwork the animals, and leads the animals during the 2nd revolution, supposedly becoming a strong leader in their community. In his young age, he also works together with Boxer when he works late hours. In the , this never occurs.
*Boxer, who is nonchalant, never makes use of any of his mottoes in the film.
*In this film Mr Whymper is a salesman who starts trading with the pigs. He also owns the glue factory to which Boxer is sent.
*In this film, Mr Jones presumably blows up the windmill. In the novel, Mr Frederick's men blew up the windmill and Jones dies in an inebriates' home at the end.
*The windmill was only destroyed once.
*The puppies that grew to be Napoleon's bodyguards were not taken away from their mother.
*In this film, the animals realize the pigs' true aims in Boxer's death.
*Snowball ran away and was never seen again in the novel; in the film Snowball is killed by the dogs.
*Old Major dies immediately after telling the animals about his dream instead of after three days, as in the novel.
*Moses the Raven and his tales of Sugarcandy Mountain are reduced to a single, short recitation.
*There are only six Commandments in this film.
*In the novel the pigs make a habit of trading with humans when they need building materials and other things that are not available on the farm. In this film, they start trading with Mr. Whymper when Napoleon runs out of jams and jellies that were left behind when Mr. Jones was expelled.
*Mr. Frederick and Mr. Pilkington's roles are reduced.
*At the end of the film, Benjamin sees the pigs 'transform' into Jones, whilst in the book Clover saw it happen.
*Clover and Muriel don't have much of a part in the film as they do in the book as in the film, the narrator states the changes to the commandments.
*The song 'Beasts of England' is referenced from the book, when Old Major sings the song to the other animals. Yet in the film, the song's lyrics are replaced with lots of animal noises.
*Napoleon and Squealer drink the milk in the film, but in the novel only Napoleon does.
*Jones did not fight in the battle of the windmill in the film.
*Napoleon never urinated on the windmill plans in the film.
*Snowball's plans for the windmill were never shown to the animals and Napoleon later said that they were his plans when first unveiled.
*"Four legs good, two legs bad" is only used once in the film.
*Napoleon's favorite sow never appeared.
*In the end of the film the card game where Pilkington and Napoleon both draw the ace of spades never happen.

In Orwell's original book, the animals simply look on in dismay as they come to realise that the pigs have become nothing better than the human masters of old.

In a stark departure from Orwell's book, the film ends immediately after this iconic image with the animals revolting against the pigs. John Halas, one half of the directing team, later reflected that the film needed the happier ending of counter-revolution, as it rewarded the audience for their emotional investment.

The [Sibley, Brian. Audio commentary on UK 2003 'Special Edition' DVD release of "Animal Farm", ASIN B00009MGK2] doubts that the team responsible were aware of the source of the funding, which is now accepted to have come from the , whose concern was to facilitate the creation of anti-communist art.

Much of the pre-release for the film in the UK focused on it being a British film instead of a product of the studios. The film critic wrote at the time: "I salute "Animal Farm" as a fine piece of work ... [the production team] have made a film for the eye, ear, heart and mind". [Lejeune, C. A. "At the films: Pig Business", "The Observer", January 1955.] In recent years, Matyas Seiber's score and Maurice Denham's vocal talents have been praised specifically (Denham provided every voice and animal noise in the film). The animation style has been described as "Disney-turned-serious".

Some criticism was levelled at the altered ending, with one paper reporting: "Orwell would not have liked this one change, with its substitution of commonplace propaganda for his own reticent, melancholy satire".

To coincide with the film's release, a comic strip version was serialised in newspapers, drawn by , one of the animators.

When first released, the gave this film a rating certificate of "X" (the same category is now "18") prohibiting anyone under 18 from seeing the film, presumably due to its implied violence and political themes. The film has since been re-classified as "U" (Universal), suitable for all audiences.