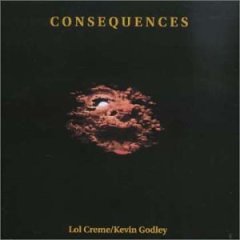 "Consequences" is the debut album by English pop artists . It was released in 1977 as a boxed triple-LP.

Created as a , it incorporates a play, with all characters voiced by comedian , and singing by , who was brought into the project by Phonogram after trying to secure .

The concept of the album was described at the time as "the story of man's last defense against an irate nature".

The album began as a vehicle for the "Gizmotron", or Gizmo, an electric guitar effect Godley and Creme had invented a few years earlier. The mechanical device, which fitted over the bridge of an electric guitar, contained small motor-driven wheels that bowed the guitar strings, producing notes and chords with endless to emulate violins, violas, cellos and basses. Godley and Creme had begun work on songs for the Gizmo before leaving , but quit the band when they realised the songs could not comfortably appear on 10cc albums. [ [http://www.minestrone.org/sounds_11_27_76.htm "Sounds" article, November 27, 1976] ] [ [http://www.othermachines.org/blint/kev.shtml Kevin Godley interview, "Uncut", December 15, 1997] ]

The album was recorded over 18 months at in and The Manor in Shipton on Cherwell, Oxfordshire, with Godley, Creme and engineer Martin Lawrence going to extraordinary lengths to create its special effects. At one point, to create the impression that the listener is inside a coffin during a burial, a microphone was placed behind a board at the foot of a flight of stairs, and Kevin Godley shovelled sand on to it. Three days were spent producing a saxophone sound from an electric guitar; each note of a guitar solo was recorded separately and faded in on the track, which was then sent through a speaker and out of a rubber hose with perforated cigarette paper at the end. Enough pressure was displaced by forcing the sound through the holes of the cigarette paper to give the rasp of a saxophone. [ [http://www.othermachines.org/blint/recording.shtml Article on making of the album, Mr Blint's Attic website] ]

[http://www.othermachines.org/blint/intro.shtml A website devoted to the album] explains that the main action of the play takes place in the office of the increasingly drunken solicitor Mr Haig; he is negotiating the divorce between Walter Stapleton and his French wife Lulu, represented by Mr Pepperman. They are continually interrupted by Mr Blint, an eccentric composer, who lives below; when the building was redeveloped he was the only tenant who refused to sell and a hole remains in Mr Haig's floor which is, technically, Blint's attic; it is through this hole that Blint addresses them.

The litigants are unware that larger forces are at work; the world is being threatened by a meteorological disaster. Weather is possibly being used as a weapon in a global war, and eventually it dawns on them that only Mr Blint can save them, with his arcane knowledge of pyramids, music and the number 17.

The album was first played to the /Mercury Records sales force at an elaborate presentation in a domed 17th century church in , , with a Scottish MC declaring: "You may like it, you may loathe it, but you can't afford to ignore... "Consequences"!"

cquote|Sounding like a cross between 10cc, , middle period and the least linear moments of the , the record demands being listened to, but then, if the response of the sales team was any indication, refuses to give up much in return. Bees buzz, Negroes hum the blooze, Peter Cook, the British comedian, adds long segments of what one supposes to be comedy, and then the Gizmo launches into action, impressive, but lacking any direction.

Twenty minutes into the presentation, heads began dropping on breastbones and the (unintentionally) funniest moment of the record occurred when snoring came from the speakers as eyes closed around the room. Already there was a cloying sense that though the disc would go on, things would not improve. "Consequences" was barely interesting then only as a display of the capabilities of Gizmo, which sat before the listeners in a glass case on presumptuous black velvet. [ [http://www.minestrone.org/gizmo1.htm "Creme and Godley Face the Consequences - 10cc's Other Half Unveils the Gizmo" by Michael Gross. Source and date unknown, copy of article at Minestrone website] ]

Godley has since admitted the pair realised even before its release that the album would be a commercial flop, because of the sudden popularity of :

"There was a seismic, paradigm shift. I knew we were doomed. We emerged blinking into the light, and everyone was wearing safety pins and bondage trousers. We'd been working on a semi-avant-garde orchestral triple album with a very drunk and me singing with , while outside it was like a nuclear bomb had dropped." [ [http://www.telegraph.co.uk/arts/main.jhtml?xml=/arts/2006/11/02/bmtencc02.xml "Clever clogs are cool at last, by Paul Lester, "Daily Telegraph", November 2, 2006] ]

"Most critics of the project call it indulgent. There's truth in that, but I believe it was big and long not because we were simply indulgent but because we were lost. After sides one and two the tail was wagging the dog a bit and we kept going in the hope it would eventually make sense to both us and a rather anxious record label. The label, for their part, was very supportive and kept pumping money into session time, but in the end it was like uppers into , a law of diminishing returns. More significantly our world gradually reduced to a series of small, dark, womb-like spaces and we became studio lifers scared of emerging into the real world.

"Regardless of the finished product we just didn't want it to stop. The result is a weird mix of sheer brilliance and utter shit. I could be wrong. It may be all brilliant or all shit or even all brilliant shit. Either way it fried our/my brains for a while and is impossible to be objective about."

In a 1997 interview Creme claimed he was not fazed by the hostile critical reaction to the album; Godley though, had been deeply affected:

"Kevin was heartbroken, I don't think he's got over it yet. He was really, really upset about the way it was received, like a big turkey, really. I didn't take it the way Kevin did, to be honest, because I loved doing it so much and I learned so much, got so much out of it, a totally selfish thing, I didn't give a shit, I really didn't. And I never have, to me it's the doing of something that's the vibe, it's not necessarily the result. It's always a bonus if what you do does well, but it's not that precious, you know. I've always thought like that.

"And I could see why it was laughed at, it does look like a pretentious pile of old stuff. We were self-indulgent pop stars, there's no question about it." [http://www.othermachines.org/blint/lol.shtml]