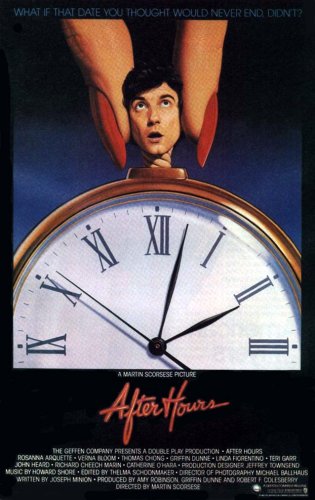 
"After Hours" is an American /thriller film released in 1985, directed by and written by . It depicts a New Yorker, Paul Hackett (), who experiences a series of adventures and perils in trying to make his way home from .

Paul Hackett experiences a hellish and seemingly endless night on the seedy streets of 's village; broke, frenzied and at his rope's end, he is thrust into the increasingly upsetting and often outlandish lives of a variety of ensemble characters. A sequence of misfortunes, coupled with misunderstandings and tragedies, threatens Paul's safety and sanity while he attempts to get back to his uptown apartment.

Paul Hackett (), a word processor, meets a woman named Marcy Franklin () in a cafe. They converse about their common interest in the works of . Marcy leaves Paul her number and informs him that she lives with a sculptor named Kiki Bridges (), who makes and sells resembling . Later in the night, Paul goes on to visit Marcy, losing his $20 bill on the way. The two have a romantic time in the apartment, yet Paul is alarmed by the spooky aura in the place and leaves abruptly.

He proceeds to go home by subway, yet the fare increases and he could not afford it. He goes to a bar. The owner, Tom Shorr (John Heard) cannot open the to help him. They exchange keys so Paul can go to Tom's place to fetch the cash register keys. On the way, he spots two s, Neil and Pepe (), with one of Kiki's work. When he returns the sculpture to the apartment, he finds Marcy has committed while Kiki and a stout man named Horst () have already left to go to Club Berlin, a . Paul goes back to Tom's bar, finding Tom in deep grief, for the death of Marcy, turning out to be Tom's girlfriend. On the way he meets two women, Julie () and Gail (), both apparently like him first but turn against him later. When he goes to the nightclub Kiki and Horst patronize, the punks attempt to shave him into a . On the street Paul is mistaken for a and is relentlessly pursued by the mob.

Paul finds Tom again, but the mob with the assistance of Julie and Gail (with her truck) at the same time finds Paul. He runs into the nightclub again, helped by a woman named June (), also a sculptress, who protects him by pouring plaster on him in order to disguise him as a sculpture. The burglar duo comes and steals him. He falls from the burglar's cargo on the gate to his office in the morning, and returns to work, giving the film a happy ending.

The film was originally to be directed by , but Scorsese read the script at a time when he was unable to get financial backing to complete "", and Burton gladly stepped aside when Scorsese expressed interest in directing. "After Hours" was also the first film of fiction directed by Scorsese in a decade without starring . [ Variety Staff, [http://www.variety.com/review/VE1117796694.html?categoryid=31&cs=1&p=0 After Hours] . Variety. 1985.]

The dialog between Paul and the doorman at Club Berlin is taken from 's "", a short story that is part of his novel "". [ Kafka, Franz. [http://records.viu.ca/~johnstoi/kafka/beforethelaw.htm Before the Law] .]

British director Michael Powell was around quite a lot while the film was being made (he and editor married soon afterwards). Nobody was sure how the film should end. Michael Powell said "He must finish up back at work" but this was initially dismissed as too unlikely and difficult. They tried many other endings, a few were even filmed. But the only one that everyone felt really worked was to have Paul finish up back at work just as the new day was starting. [ [http://www.imdb.com/title/tt0088680/trivia IMDb notes] ]

The film grossed $10,609,321 in the United States. [ [http://www.boxofficemojo.com/movies/?id=afterhours.htm After Hours] . Box Office Mojo.] Though it was not received well by moviegoers, it was given positive reviews at the time and is now said to be an "underrated" Scorsese film, as well as a cult classic in its own right. The film did, however, garner Scorsese the best director award at the and allowed the director to take a deserved hiatus from the tumultuous development of "" It currently holds a 92% rating on . [ [http://www.rottentomatoes.com/m/1032180-after_hours/ After Hours] . Rotten Tomatoes. ] Prominent film critic gave "After Hours" a positive review and a rating of four stars. He praised the film as one of the best in the year, and said it "continues Scorsese's attempt to combine comedy and satire with unrelenting pressure and a sense of all-pervading paranoia." [ Ebert, Roger. [http://rogerebert.suntimes.com/apps/pbcs.dll/article?AID=/19851011/REVIEWS/510110301/1023 After Hours] . October 11, 1985. ]

The criticized the film, however, citing its "lack of satirical bite" and for making fun of "mental instability and bizarre sexual practices". The office listed "After Hours" in the "L" rating, advising it only to be viewed by a limited adult audience. [ [http://www.usccb.org/movies/a/afterhours.shtml After Hours] . United States Conference of Catholic Bishops' Office for Film and Broadcasting. ] The gave the film an "R" rating. [ [http://www.mpaa.org/FilmRatings.asp Film ratings] . MPAA.]

Radio artist later filed a lawsuit, claiming the screenplay lifted its plot setup and portions of dialogue (particularly in the first 30 minutes of the film) from his 1982 "NPR Playhouse" monologue "Lies." Though Frank never received official credit, he reportedly received a substantial settlement. [ Hearst, Andrews. [http://www.panopticist.com/2008/05/the_scandalous_origins_of_martin_scorseses_after_hours.html] . May 27, 2008. ]