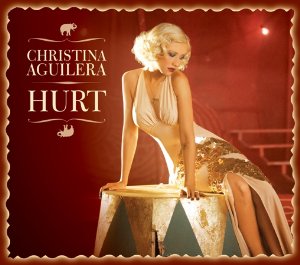 "Hurt" is a pop ballad written by , and for Aguilera's third studio album, "Back to Basics" (2006). The song's lyrical content describes how one deals with the loss of a loved one, and it has received praise from pop music critics. Aguilera premiered the song at the and was released as the album's second single in late 2006 (see ).

Originally Aguilera did not want "Hurt" to be the second single from "Back to Basics". Prior to this decision, "Candyman" was planned as the second single and even was confirmed by Aguilera during several different interviews. However, felt that, with the holiday season coming up, it would be safer to release "Hurt", as it would become a big holiday , comparable to how Aguilera's "Beautiful" performed commercially back in late 2002. [Cite news |last=Jobling |first=John |title=Christina Aguilera – Candyman (review) |url=http://www.mansized.co.uk/reviews/review.phtml/540/667/ |publisher= "Mansized" |date=(,) |accessdate=2008-08-25]

"Hurt" was released to radio airplay in the on . The single debuted on the Billboard Hot 100 at #100 in the , edition. The single would peak on the Hot 100 at #19 in mid-December. "Hurt" had its biggest success on Adult Contemporary radio, where it reached #6 on the Billboard Adult Contemporary chart. Aguilera promoted the single during the holidays by performing on the TV special "Christmas at Rockefeller Center", on , on NBC.

"Hurt" was generally very well-received by contemporary pop music critics. "Billboard" commented that Aguilera's " [vocals] relate the pain of moving past a relationship in ruins is daunting", and that "this potential contender" has "a melody and lush production that carries [the song] into the clouds. [Cite news |last=Taylor | first=Chuck |title= Billboard "Hurt" Review |url=http://www.billboard.com/bbcom/reviews/single_review_display.jsp?vnu_content_id=1003122613 |publisher="" | accessdate=2008-08-25] Blogcritics claims that song's "slow opening to a soft all the way to the spine-tingling bridge" is "one weeper of a ballad", and that Aguilera's "power-belting" vocals were "better than ever". reviewer Bill Lamb gave the song five stars, saying "a single piano with the backing of strings gives way to one of the most technically stunning voices in pop music singing words of pain, guilt, and grief in the loss of a loved one." He continues on, predicting the song would edge near to "the top of the pop singles chart by Christmas 2006." [Cite news |last=Lamb | first=Bill |title= Christina Aguilera - Hurt (About.com)
url=http://top40.about.com/od/singles/gr/caguilerahurt.htm |publisher="About" | accessdate=2008-08-25] Some reviews, however, were less positive. In the "Rolling Stone" magazine review for "Back to Basics", the reviewer, , called "Hurt" an "incongruous schmaltzfest". [Cite news |last=Eliscu | first=Jenny |title= Rolling Stones "Back to Basics" Review |url=http://www.rollingstone.com/artists/christinaaguilera/albums/album/11107200/review/11111609/back_to_basics |publisher="" |date= , |accessdate=2008-08-25]

Hurt reached #11 on the , and astonishingly re-entered the Top 40 at #39 in December 2007, over one year after the single's initial release. This is more than likely due to the song being performed by Hope, contestants on popular talent show, The X Factor, the week before.

The song had moderate success in the U.S. peaking at #19. The song became a huge hit across Europe and achieved gold status in the U.S. On the overall Top 200 Europe chart (which calculates sales from all European countries), 'Hurt' reached #3 on that chart.

Hurt showed great longevity on the Swiss Single Chart, remaining 40 weeks into the Top100 and re-entering the charts on the week of 19th August 2007 and 13th of March 2008. [Cite news |title= Christina Aguilera - Swisscharts |url=http://www.swisscharts.com/showitem.asp?interpret=Christina+Aguilera&titel=Hurt&cat=s |publisher="SwissCharts" | accessdate=2008-08-25] Additionally Hurt managed to chart 26 weeks in the German Single Top 100 Chart ,the longest-charting single of Christina on German Charts. [Cite news |title= Archiv Chartsurfer |url=http://www.chartsurfer.de/interpret/2286/christina-aguilera.html |publisher="Chartsurfer" | accessdate=2008-08-25] The single, which peaked there at number 2, showed great longevity too, re-entering the chart in the 34th week of 2007 and in the 11th, 13th and 14th of 2008.

During MTV's red-carpet pre-show, Aguilera revealed that she would co-direct the music video alongside , who worked on "Fighter" (2003). The -themed video for "Hurt" was shot over five days in September and the video premiered on on "TRL". It is the first video Aguilera has directed. The video reached number one on "TRL" fourteen times and retired at number 1 on January 11, 2007. It's her eighth video to retire on that show. Furthermore, the video swept the 2007 MVPA awards winning Best Video and Best Direction of a Female Artist.

The video begins with the ending instrumental to "Enter the circus"/"Welcome", over which a carnival barker (voiced by ) introduces a spectacular circus, and begins in black and white. The transition to colour begins when Aguilera appears in an old fashioned dressing room, receiving flowers and then an important telegram. A flashback then shows young Aguilera, played by Laci Kay, with her father, played by Timothy V. Murphy, raptured by the sight of the tightrope walker, played by Elizabeth Glassco. With her father's encouragement, Aguilera begins to train herself to do the same. When the video switches to older Aguilera, we see her descending from the top of a circus tent on a rope, onto the back of an elephant, with her father watching adoringly in the audience. She later attempts to greet him but is pulled away by fans and photographers keen to meet the star. The content of the telegram is then revealed to be a message of her father's death, and as Aguilera realises that she was too wrapped up in her stardom to deal with what matters, she races through the circus in a belated attempt to find her father. The video ends with a shot of Aguilera sitting on a circus box, singing and crying, before fading out to Aguilera's grief-stricken form on the ground outside the circus tent.

These are the formats and track listings of major single releases of "Hurt".