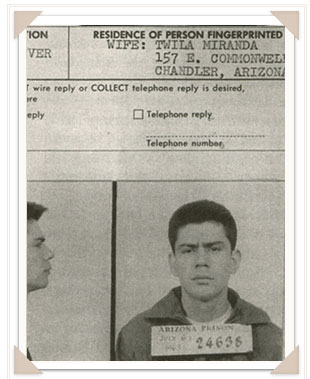 Ernesto Arturo Miranda (, – , ) was a laborer whose conviction on kidnapping, rape, and armed robbery charges based on his under police resulted in the landmark U.S. Supreme Court case (""), which ruled that criminal suspects must be informed of their right against self-incrimination and their right to consult with an attorney prior to questioning by police. This warning is known as a .

Ernesto Arturo Miranda was born in on , . Miranda began getting in trouble when he was in grade school. Shortly after his mother died, his father remarried. Miranda and his father didn’t get along very well; he kept his distance from his brothers and stepmother as well. Miranda's first criminal conviction was in eighth grade. The following year, he was convicted for burglary, and sentenced to a year in reform school.

In 1956, about a month after his release from the reform school, Arizona State Industrial School for Boys, he fell afoul of the law once more and was returned to ASISB. Upon his second release from reform school he relocated to , . Within months of his arrival in LA, Miranda was arrested on suspicion of armed robbery (but not convicted) and for some minor sex offenses. After two and a half years in custody the 18-year-old Miranda was deported back to Arizona.

At that time he decided to join the army. During his army service he received many charges and charges for spying on other people's sexual activities. He also spent six months in the , stockade at hard labor. After 15 months in the service, during which time he was ordered to consult a psychiatrist but only went to one session, Miranda was dishonorably discharged.

He drifted around the south for a few months, spending time in jail in for living on the street without money or a place to live, and was arrested in driving a stolen car. Because he had taken the stolen vehicle across state lines, Miranda was sentenced to a year and a day in the federal prison system, serving time in and later in .

The next couple of years Miranda kept out of jail, working at various places, until he became a laborer on the night loading dock for the Phoenix produce company. At that time he started living with Twila Hoffman, a 29-year-old mother of a boy and a girl by another man, from whom she could not afford a divorce.

According to the Phoenix police, Miranda repeatedly abducted, kidnapped, raped and robbed young women during this time. His searching grounds for victims were so limited though, that in March 1963, his truck was spotted and license plates recognized by the brother of an 18 year old rape victim, Lois Ann Jameson (the victim had given the brother a description). With his description of the car and a partial license plate number, Phoenix police officers Carroll Cooley and Wilfred Young arrested Miranda, took him to the station house and placed him in a lineup.

After the lineup, when Miranda asked what he did, the police implied that he was positively identified. The police got a confession out of Miranda after two hours of interrogation, without informing him of his rights. After unburdening himself to the officers, Miranda was taken to meet the rape victim for positive voice identification. Asked by officers, in her presence, whether this was the victim, Miranda said, "That's the girl." The victim stated that the sound of Miranda's voice matched that of the culprit.

Miranda then wrote his confessions down. At the top of each sheet was the printed certification that the confessor makes "…this statement has been made voluntarily and of my own free will, with no threats, coercion or promises of immunity and with full knowledge of my legal rights, understanding any statement I make can and will be used against me." Despite the statement on top of the sheets that Miranda was confessing "with full knowledge of my legal right", he was not informed of his right to have an attorney present or of his right to remain silent. 73-year-old Alvin Moore was assigned to represent him at his trial. The trial took place in mid-June 1963 before Superior Court Judge Yale McFate.

Moore objected to entering the confession by Miranda as evidence during the trial but was overruled. Mostly because of the confession, Miranda was convicted of rape and kidnapping and sentenced to 20 to 30 years on both charges. Moore appealed to the Supreme Court but the charges were upheld.

Filing as a , Miranda submitted his plea for a writ of certiorari, or request for review of his case to the in June 1965. After Alvin Moore was unable to take the case because of health reasons, the (ACLU) attorney Robert J. Corcoran, asked John J. Flynn, a reputable criminal defense attorney, to do a pro bono basis case along with his partner, John P. Frank, and an associate Peter D. Baird of the law firm Lewis & Roca in Phoenix to represent Miranda. [ [http://www.lrlaw.com/timeline.shtml 1966 - Miranda v. Arizona] , Lewis and Roca Law Firm, Retrieved , ] They wrote a 2,500 word petition for that argued that Miranda's Sixth Amendment rights had been violated and sent it to the United States Supreme Court.

In November 1965, the Supreme Court agreed to hear Miranda's case, "Miranda v. Arizona", along with three other similar cases to clear all misunderstandings created by the ruling of "". That previous case had ruled, "when police are no longer conducting a general inquiry into an unsolved crime but are focusing on a particular suspect in custody, refusing to allow that suspect to consult with an attorney and failing to warn the suspect of his right to remain silent is denial of the assistance of counsel in violation of the Sixth Amendment". In January 1966, Flynn and Frank submitted their argument stating that Miranda's Sixth Amendment right to counsel had been violated by the Phoenix Police Department. Two weeks later the state of Arizona responded by stating that Miranda's rights had not been violated. The first day of the case was on the last day of February 1966. Because of the three other cases and other information the case had a second day of oral arguments on .

John Flynn and John Paul Frank for Miranda outlined the case and then stated that Miranda had not been advised of his right to remain silent when he had been arrested and questioned, adding the Fifth Amendment argument to his case. Flynn contended that an emotionally disturbed man like Miranda, who had a limited education, shouldn’t be expected to know his Fifth Amendment right not to incriminate himself.

Gary Nelson spoke for the people of Arizona, arguing that this was not a Fifth Amendment issue but just an attempt to expand the Sixth Amendment Escobedo decision. He urged the justices to clarify their position, but not to push the limits of Escobedo too far. He then told the court that forcing police to advise suspects of their rights would seriously obstruct public safety. The Miranda case was not the only case in the 1960s that had controversial issues; three similar cases were Vignera v. New York, Westover v. United States, and California v. Stewart.

The second day had others from the other cases and some arguments. , the former attorney, was the last to present his stand on the case. Chief Justice wrote the opinion in Miranda v. Arizona. The decision was in favor of Miranda. It stated that"

The opinion was released on , . Because of the ruling, police departments around the country started to issue s. Typically, they read:

You have the right to remain silent. If you give up that right, anything you say can and will be used against you in a court of law. You have the right to an attorney and to have an attorney present during questioning. If you cannot afford an attorney, one will be provided to you at no cost. During any questioning, you may decide at any time to exercise these rights, not answer any questions or make any statements. Do you understand these rights as I have read them to you?

Of the charges brought against Miranda, only the rape charge was dropped. A robbery charge was still valid and another trial was decided to be held on the rape charge (without the confession as evidence) soon after the decision. He was quickly re-sentenced to eleven years in prison for kidnapping and rape due to a confession he had made to his wife.

After serving one-third of his sentence and being turned down for parole four times Miranda was paroled in December 1972. After his release, he started selling autographed Miranda Warning cards for $1.50. [ [http://www.americanheritage.com/events/articles/web/20060613-ernesto-miranda-rights-supreme-court-fifth-amendment-arizona-constitution-scottsboro.shtml The Miranda Decision - 40 Years Later] , [http://www.americanheritage.com/ AmericanHeritage.com] , Retrieved , ] Over the next years, Miranda was arrested numerous times for minor driving offenses and eventually lost the priviledge to drive a car. He was arrested for the possession of a gun but the charges were dropped. But because this violated his parole he was sent back to for another year.

After his release, Miranda spent most of his time in poorly kept bars and cheap hotels in the bad section of Phoenix. Miranda, then working as a delivery driver, participated in a card game at the La Amapola Bar. On , , a violent fight broke out and Miranda received a mortal knife wound; he was pronounced dead on arrival at Good Samaritan Hospital. He was 34 years old. Police officers apprehended a male shortly afterwards and read him his Miranda rights from a small rectangular card. However, the suspect refused to cooperate with police and took advantage of his right to remain silent. According to one source, Miranda's killer could not be prosecuted because he fled to Mexico. [ [http://www.asu.edu/news/campus/stuart_mirandabook_093004.htm Regent Gary Stuart gathers ‘Miranda’ memories into new book] , , Retrieved , ]