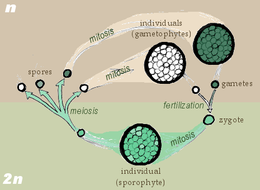 In biology, a spore is a reproductive structure that is adapted for dispersal and surviving for extended periods of time in unfavorable conditions. Spores form part of the life cycles of many bacteria, plants, algae, fungi and some protozoa.[1] According to scientist Dr. Steinn Sigurdsson, "There are viable bacterial spores that have been found that are 40 million years old on Earth - and we know they're very hardened to radiation."[2]

A chief difference between spores and seeds as dispersal units is that spores have very little stored food resources compared with seeds.

Spores are usually haploid and unicellular and are produced by meiosis in the sporangium by the sporophyte. Once conditions are favorable, the spore can develop into a new organism using mitotic division, producing a multicellular gametophyte, which eventually goes on to produce gametes. Two gametes fuse to create a new sporophyte. This cycle is known as alternation of generations, but a better term is "biological life cycle", as there may be more than one phase and so it cannot be a direct alternation. Haploid spores produced by mitosis (known as mitospores) are used by many fungi for asexual reproduction.

Many species of fern, especially those adapted to dry conditions, produce diploid spores. This form of asexual reproduction is called apogamy. It is a form of apomixis.

In common parlance, the difference between a "spore" and a "gamete" (both together called gonites) is that a spore will germinate and develop into a sporeling, while a gamete needs to combine with another gamete before developing further. However, the terms are somewhat interchangeable when referring to gametes.

A chief difference between spores and seeds as dispersal units is that spores have little food storage compared with seeds, and thus require more favorable conditions in order to successfully germinate. (This is not without its exceptions, however: many orchid seeds, although multicellular, are microscopic and lack endosperm, and spores of some fungi in the Glomeromycota commonly exceed 300 µm in diameter.)[3] Seeds, therefore, are more resistant to harsh conditions and require less energy to start mitosis. Spores are produced in large numbers to increase the chance of a spore surviving in a number of notable examples.

Spores can be classified in several ways: 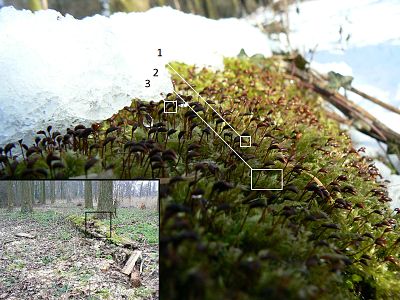 Fresh snow partially covers Rough-stalked Feather-moss (Brachythecium rutabulum), growing on a thinned hybrid black poplar (Populus x canadensis). The last stage of the moss lifecycle is shown, where the sporophytes are visible before dispersion of their spores: the calyptra (1) is still attached to the capsule (2). The tops of the gametophytes (3) can be discerned as well. Inset shows the surrounding, black poplars growing on sandy loam on the bank of a kolk, with the detail area marked. 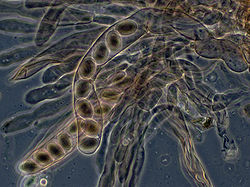 In plants, microspores, and in some cases megaspores, are formed from all four products of meiosis.

In contrast, in many seed plants and heterosporous ferns, only a single product of meiosis will become a megaspore (macrospore), with the rest degenerating.

By origin during life cycle

Spores can be differentiated by whether they can move or not.

Under high magnification, spores can be categorized as either monolete spores or trilete spores. In monolete spores, there is a single line on the spore indicating the axis on which the mother spore was split into four along a vertical axis. In trilete spores, all four spores share a common origin and are in contact with each other, so when they separate, each spore shows three lines radiating from a center pole.

Vascular plant spores are always haploid. Vascular plants are either homosporous (or isosporous) or heterosporous. Plants that are homosporous produce spores of the same size and type. Heterosporous plants, such as spikemosses, quillworts, and some aquatic ferns produce spores of two different sizes: the larger spore in effect functioning as a "female" spore and the smaller functioning as a "male".

Trilete spores, formed by the dissociation of a spore tetrad, are taken as the earliest evidence of life on land,[5] dating to the mid-Ordovician (early Llanvirn, ~470 million years ago).[6]

Spores being ejected by fungi.

In fungi, both asexual and sexual spores or sporangiospores of many fungal species are actively dispersed by forcible ejection from their reproductive structures. This ejection ensures exit of the spores from the reproductive structures as well as travelling through the air over long distances. Many fungi thereby possess specialized mechanical and physiological mechanisms as well as spore-surface structures, such as hydrophobins, for spore ejection. These mechanisms include, for example, forcible discharge of ascospores enabled by the structure of the ascus and accumulation of osmolytes in the fluids of the ascus that lead to explosive discharge of the ascospores into the air.[7] The forcible discharge of single spores termed ballistospores involves formation of a small drop of water (Buller's drop), which upon contact with the spore leads to its projectile release with an initial acceleration of more than 10,000 g.[8] Other fungi rely on alternative mechanisms for spore release, such as external mechanical forces, exemplified by puffballs. Attracting insects, such as flies, to fruiting structures, by virtue of their having lively colours and a putrid odour, for dispersal of fungal spores is yet another strategy, most prominently used by the stinkhorns.

In the case of spore-shedding vascular plants such as ferns, wind distribution of very light spores provides great capacity for dispersal. Also, spores are less subject to animal predation than seeds because they contain almost no food reserve; however they are more subject to fungal and bacterial predation. Their chief advantage is that, of all forms of progeny, spores require the least energy and materials to produce.

In the spikemoss Selaginella lepidophylla, dispersal is achieved in part by an unusual type of diaspore, a tumbleweed.[9]