Mop Fairs (also "The Mop" singular and "Mops" plural) are a feature of many English towns and are traditionally held on or around "Old Michaelmas Day". They originated as a Hiring fair and their history dates back some 600 to 700 years.

Farm workers, labourers, servants and some craftsmen would work for their employer from October to October. At the end of the employment they would attend the Mop Fair dressed in their Sunday best clothes and carrying an item signifying their trade. A servant with no particular skills would carry a mop head.[citation needed] The 'tassle' worn on their lapel was the emblem of the employee's trade was known as a 'mop' — hence the phrase Mop Fair.

Employers would move amongst them discussing experience and terms, once agreement was reached the employer would give the employee a small token of money and the employee would remove the item signifying their trade and wear bright ribbons to indicate they had been hired. They would then spend the token amongst the stalls set up at the fair which would be selling food and drink and offering games to play.

Michaelmas Day is celebrated on 29 September but Mop Fairs were tied to the seasons and the harvest, not the calendar. When the Gregorian calendar was adopted in 1752 and eleven days dropped from that year events associated with the end of the harvest moved eleven days later to 10 October. This date is known as "Old Michaelmas Day" and since 1752 has been the date Mop Fairs take place. 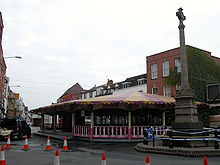 Tewkesbury Mop Fair, as with others, takes over the entire town centre, here showing the Dodgem belonging to the Deakin family who have attended the fair since the early 1900's.

Mops are still held in some English towns, though many have died out. Some fairs have adopted the term Mop, though they are usually not held on or near to Michaelmas Day or they are a recent creation.

Mops usually last for two days and take over the centre of the town, they attract thousands of visitors. In recent times the Mops have become little more than a funfair with the traditional reason for the fair playing no part. Many of the rides at the Mop are fast, brightly lit and very noisy but traditional rides such as carousels and helter-skelters will still be found though their days may be numbered as visitors more and more ignore them for their more modern competitors.

The following towns have a history of holding Mops and still hold one each year on or around Michaelmas Day. A theme common to these towns is that they were, several hundred years ago, medium-sized thriving market towns surrounded by a large number of smaller villages, hence their obvious choice as the location for the Mop.