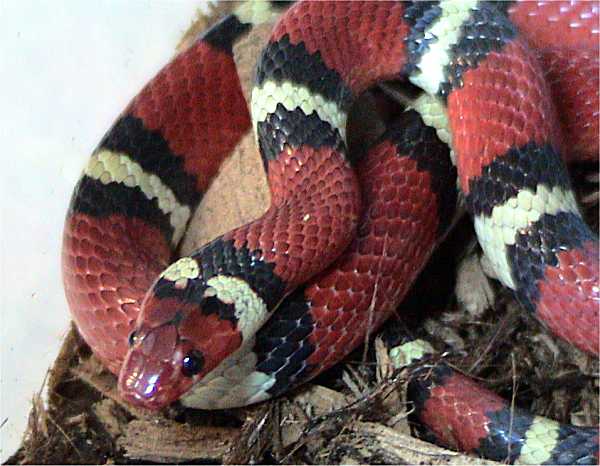 The snake has a tri-color pattern of , , and bands that the venomous . A method to help differentiate between venomous and non venomous tri-color snakes in is found in the popular phrases "red on yellow, kill a fellow; red on black venom lack" or "If red touches yellow, you're a dead fellow; if red touches black, you're alright, Jack" and "Red and black is a friend of Jack".

While the phrases can be helpful in to partially identify a certain amount of risk with the venomous coral snakes they should not be used as a means of identification. If "red touches black" it does not necessarily indicate a non venomous snake and it certainly does not necessarily denote a scarlet kingsnake. Be advised that the "phrases" are not accurate outside of North America. Other localities have venomous snakes where the red and black touch - and even within North America there are other snake species besides the Scarlet Kingsnake which are not venomous and have similar markings.

Juvenile specimens of this snake usually have the same colours as adults, but often have rings that look more "off white" than yellow. As they become mature, their rings turn more yellow.

Scarlet kingsnakes spend a lot of their time hiding under cover. Loose bark on rotting pine trees is a favorite place for them to hide. It is in these places that they find a steady supply of one of their favorite foods, s.

They eat small animals, eggs and other reptiles including lizards and other snakes.Many people have these as pets as they are easy to look after.

It is thought to with the Eastern Milksnake to make an intermediate form once named the coastal plains milk snake (Latin: "Lampropeltis triangulum temporalis"), but this is no longer recognized as a legitimate .