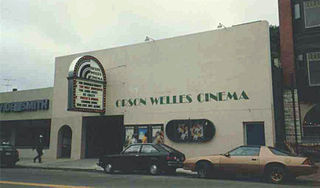 The Orson Welles Cinema was a movie theater at 1001 Massachusetts Avenue in Cambridge, Massachusetts that operated from 1969 to 1986. Showcasing independent films, foreign films and revivals, it became a focal point of the Boston-Cambridge film community. 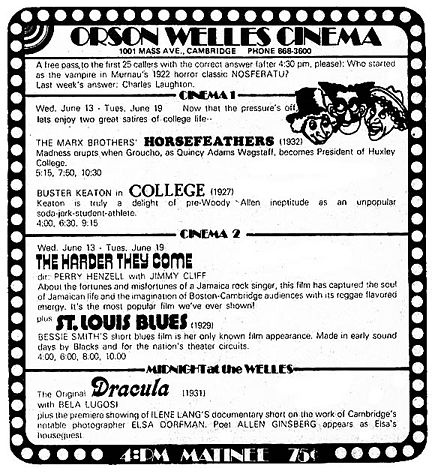 The Orson Welles Cinema opened April 8, 1969 with Luis Buñuel's Simon of the Desert, Orson Welles' The Immortal Story and a midnight movie, Don Siegel's Invasion of the Body Snatchers.[1]

Originally the Esquire Theater in the early 1960s,[2] it became the Orson Welles Cinema under its next owner, folk musician Dean Gitter.[1] It was programmed by then-Harvard-Law student Peter Jaszi.

On September 29, 1970, the cinema was raided by Massachusetts State Police for showing Oh Calcutta on video. Gitter, Jaszi, and Ted Uzzle, among others, were arrested, and spent the night in the Cambridge jail (http://www.thecrimson.com/article/1970/9/29/police-arrest-9-in-welles-raid/). The case would later be laughed out of court.

When Gitter departed, the new owners were Molly and Ralph Hoagland (later a co-founder of the CVS Corporation). From 1971 to 1978 the theater was managed and programmed by Larry Jackson, who later held positions with Miramax, Orion Pictures and the Samuel Goldwyn Company.

In 1972-73, the Orson Welles Cinema expanded with two smaller screening rooms in addition to the main 400 seat auditorium. Larry Jackson, who worked with Gary Graver and Welles on The Other Side of the Wind, succeeded in getting Welles to visit the cinema named in his honor. Welles and his cameraman Graver used the occasion—the premiere of F For Fake on January 7, 1977—to shoot footage inside the Orson Welles Cinema for their documentary Filming Othello (1978).[3] In March 2006, Jackson staged a showing of rare footage by Orson Welles in Northampton, Massachusetts.[4]

The Orson Welles Cinema came to an end with an electrical fire at 2pm on Saturday, May 24, 1986. The last three films shown were Henry Jaglom's Always, Dick Clement's Water and Dennis Potter's Dreamchild.

Vintage Hitchcock is a 13" x 18" poster designed by Jean Fogle for a month-long Alfred Hitchcock series held in 1973 at the Orson Welles Cinema in Cambridge, Massachusetts.

The Orson Welles Cinema's advertising and promotion were under the direction of John Fogle,[6] with ad and poster copy written by Fogle and Larry Jackson. The Welles Cinema's posters were designed by Jean Fogle. Extra runs of these posters were sold in the lobby. Among Fogle's outstanding creations was Vintage Hitchcock, a 13" x 18" poster she designed for a month-long Hitchcock series held in 1973.

Film notes for each showing were prepared by staffer John Rossi, who for each film gathered lengthy cast and crew credits, a partial synopsis and selected film reviews. These were prepared in the upstairs offices of the complex, as was the black-and-white digest-sized Orson Welles Cinema Magazine.[6]

In February 1976, the Welles launched its 24-hour Science Fiction Film Marathon with The Day of the Triffids, The Day the Earth Stood Still, Earth vs. the Flying Saucers, Fantastic Voyage, Five Million Years to Earth, The Incredible Shrinking Man, Invasion of the Body Snatchers (1956), It Came from Outer Space, Them!, The Thing from Another World (1951), The Shape of Things to Come, This Island Earth, The War of the Worlds, and Zardoz.[7]

The Marathon became an annual event that it continued even after the Orson Welles Cinema closed. Following the 11 Marathons held at the Orson Welles, the film series moved on to other Boston theaters, and under the name Boston Science Fiction Film Festival it is now held annually on President's Day weekend at the Somerville Theater (Somerville, Massachusetts).[8]

Less successful was the Welles' Boston Film Festival (1976), which included such films as Monty Python's Flying Circus' And Now for Something Completely Different and Jacques Rivette's Out One: Spectre. However, according to Welles Cinema staffers, many of the announced films arrived late or never appeared.

The career of writer-producer Fred Barron began in 1975 when he used the history of Cambridge's The Real Paper as the basis for a screenplay, Between the Lines. When Joan Micklin Silver brought Hester Street (1975) to the Welles Cinema, she was joined at the Welles Restaurant by Barron and others. When someone asked what she would direct next, she answered that she was looking at screenplays. Barron stood up, left the restaurant and returned with his screenplay. The success of Between the Lines (1977) led to a short-lived TV series, also titled Between the Lines.

On January 2, 1975, Nicholas Ray appeared at the Welles for a Q&A session after the showing of the David Helpern's documentary, I'm a Stranger Here Myself. Other filmmakers and musicians who made personal appearances or visited at the Welles Cinema included Peter Bogdanovich, Edward Dmytryk, Ed Emshwiller, Jean Eustache, Gary Graver, Jean-Pierre Léaud, Jim McBride, Vincente Minnelli, Nicholas Ray, George A. Romero, Harold Russell, François Truffaut, Orson Welles and Neil Young. After Steven Lisberger premiered his Cosmic Cartoon (1973) at the Welles, the animated short received a Student Academy Award nomination,[10] and he went on to make Animalympics and Tron.