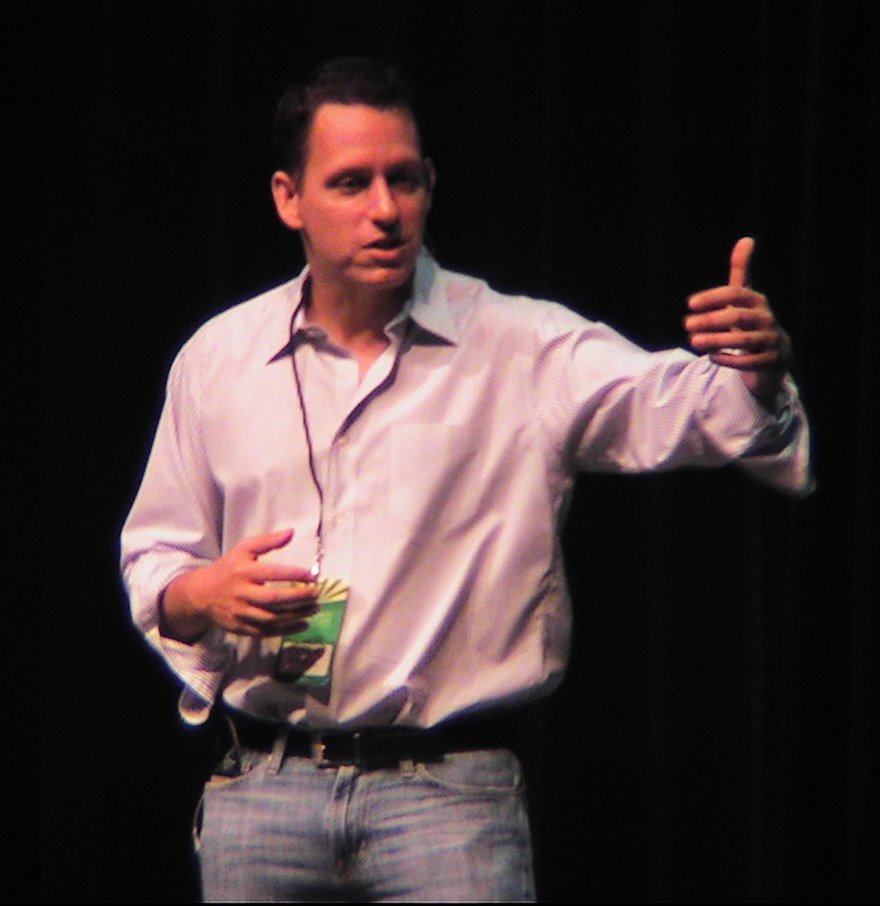 Peter Andreas Thiel (born ) is an American ,
manager, and venture capitalist. With , Thiel co-founded and was its . He currently serves as president of , a hedge fund with more than $6 billion under management, and a managing partner in , a $275 million under management venture capital fund he launched with and in 2005. He was an early investor in , the popular social-networking site, and sits on the company’s Board of Directors.

Born in , , and raised in , , Thiel studied as an undergraduate at . An avowed , he founded , now the university's main conservative/libertarian newspaper.

After earning his J.D. from Stanford in 1992, Thiel clerked for Judge J.L. Edmondson of the 11th Circuit Court of Appeals, practiced law and later traded derivatives. He eventually founded Thiel Capital Management, a multistrategy fund, in . After co-founding PayPal, Thiel took the company public on Feb. 15, 2002, and sold it to for 1.5
billion later that year. [Cite web
title = eBay picks up PayPal for $1.5 billion
CNET News.com
accessdate = 2008-01-24
url = http://www.news.com/2100-1017-941964.html
archiveurl = http://www.webcitation.org/5ZJ3x0dGI
archivedate = 2008-07-14
quote = On Monday, eBay said it is acquiring online payments company PayPal in a deal valued at $1.5 billion. [...] ] His 3.7 percent stake in PayPal was worth approximately $55 million at the time of the acquisition. [Cite web
title = SEC Info - Ebay Inc - S-4 - On 8/6/02
accessdate = 2008-01-24
url = http://www.secinfo.com/dr6nd.33fd.htm
archiveurl = http://www.webcitation.org/5aLa2AuUR
archivedate = 2008-08-26 ] Immediately after the sale, Thiel relaunched his fund with a new name, Clarium, pursuing a global macro strategy. In 2005, Clarium was honored as global macro fund of the year by both and , two trade magazines. Thiel’s approach to investing became the subject of a chapter in Steve Drobny’s book, "Inside the House of Money".

In addition to Facebook, Thiel has made early-stage investments in several startups, including Slide, , , , Palantir Technologies, Joyent and . Slide, LinkedIn, and IronPort were each founded by colleagues of Thiel’s from PayPal. Fortune magazine reports that PayPal alumni have founded or invested in dozens of startups with an aggregate value, according to Thiel, of around $30 billion.

Thiel’s cultural pursuits have recently included executive producing “,” a feature film based on the
novel of the same name. He is a chess master. He is also the co-author (with , who produced "TYFS") of the book, "", and has contributed articles to "The Wall Street Journal", "First Things", "Forbes", and "", the journal of The (on whose board he sits). In 2006, he won the Herman Lay Award for Entrepreneurship. [Cite web
title = The Association of Private Enterprise Education
accessdate = 2008-01-24
url = http://www.apee.org/award-lay.html
archiveurl = http://www.webcitation.org/5aLaFTFDk
archivedate = 2008-08-26 ] In 2007, he was honored as a Young Global leader by the as one of the 250 most distinguished leaders age 40 and under.Fact|date=January 2008

In February 2006 Thiel provided $100,000 of matching funds to back the Singularity Challenge donation drive of the . Additionally he joined the Institute's advisory board and participated in the May 2006 Singularity Summit at Stanford.

In September 2006 Thiel announced that he would donate $3.5 million to foster anti-aging research through the foundation. [Cite web
title = The Mprize-PayPal Founder pledges $3.5 Million to antiaging research
accessdate = 2008-01-24
url = http://www.mprize.org/index.php?pagename=newsdetaildisplay&ID=0107
archiveurl = http://www.webcitation.org/5aLaLUBuY
archivedate = 2008-08-26 ] He gave the following reasons for his pledge: "Rapid advances in biological science foretell of a treasure trove of discoveries this century, including dramatically improved health and longevity for all. I’m backing , because I believe that his revolutionary approach to aging research will accelerate this process, allowing many people alive today to enjoy radically longer and healthier lives for themselves and their loved ones."

In May 2007 Thiel provided half of the $400,000 matching funds for the annual Singularity Challenge donation drive.

On April 15th, 2008, Thiel pledged $500,000 to the new Institute, whose mission is "to establish permanent, autonomous ocean communities to enable experimentation and innovation with diverse social, political, and legal systems"